Wolves 1-0 West Ham: Raul Jimenez slides in second-half winner after Hammers defender Kurt Zouma had an effort ruled out for a foul as hosts climb up to sixth in the Premier League

By Lewis Steele For The Mail On Sunday

When Tottenham were recently hailed for upgrading on Nuno Espirito Santo in their dugout, Wolves argued they had already been there, done that.

And what a level up Portuguese coach Bruno Lage is on his predecessor, first in terms of the easy-on-the-eye, exciting football, and now also in terms of results.

It was a tough start for Lage in English football, the bookmakers’ pre-season favourite in the ‘first manager to be sacked’ market. His side lost his first three Premier League matches but have now won six of their last nine.

Saturday’s victory over West Ham was perhaps the finest as they made the division’s in-form side look surprisingly average.

Raul Jimenez’ second-half sumptuous strike was the only goal but it would have been far more if not for the steely determination of Hammers goalkeeper Lukasz Fabianski.

Remember, West Ham swept Liverpool and Manchester City away before the international break and entered this match third in the table. 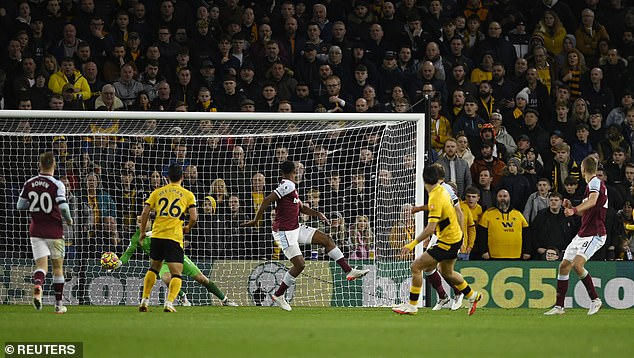 So this was no regular three points for Wolves, rather a seismic victory that sends them into sixth place in the table, ahead of Manchester United and Tottenham, and sends a message to fellow teams.

Indeed, Wolves are living it large under new boss Lage, still a rather unknown figure to the majority of English football watchers.

They look supremely solid in defence and play fast, one-touch football when attacking. 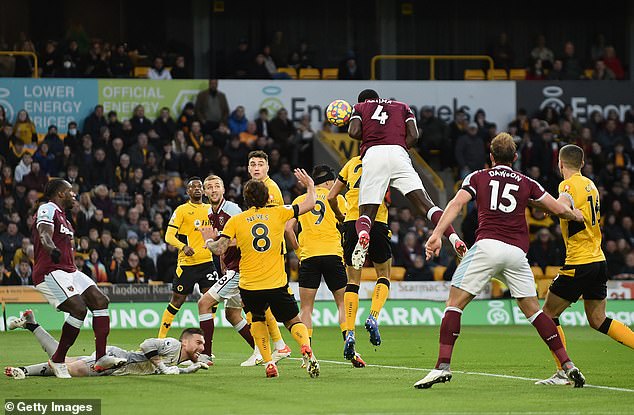 Kurt Zouma had the ball in the net, but the centre-back’s header was disallowed for a foul

It’s not perfect yet under Lage, of course, last time out they were turgid and barely threatened in a loss at Crystal Palace. The boss clearly demanded more here and he got it, though they went into half-time level despite a flurry of first-half chances.

On the half-hour mark, referee Mike Dean waved away shouts for a penalty after a Hee-chan Hwang cross was clearly blocked by the arm of West Ham defender Ben Johnson.

Wolves continued to attack with pace and they seemed to be reproducing the football that played Everton off the park here two matches ago. 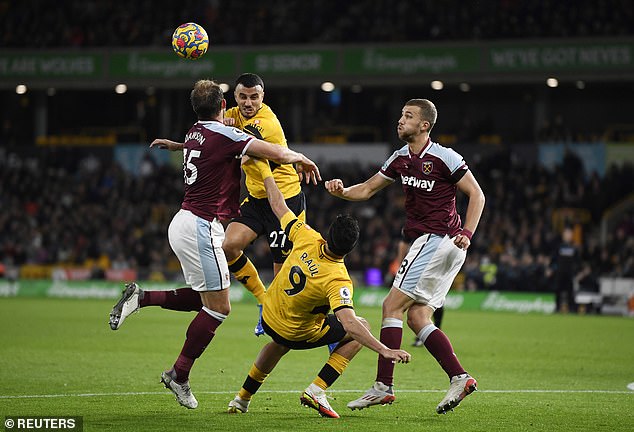 It was just a shame that Jimenez couldn’t replicate the goal he scored in that game, again trying a deft chip over the goalkeeper as Ruben Neves threaded a delightful pass into his path.

Joao Moutinho and Nelson Semedo also forced saves from goalkeeper Fabianski, while West Ham defended a couple of fierce set-pieces – Wolves were by far the superior side but couldn’t find an opening.

Indeed, David Moyes’ side who entered the day in third place, barely gave Wolves goalkeeper Jose Sa anything to worry about in the first half, bar an early Jarrod Bowen header.

Kurt Zouma then headed the ball into the net for West Ham but before the defender could wheel away to celebrate, referee Dean had signalled for a foul as Bowen’s corner was crossed in. 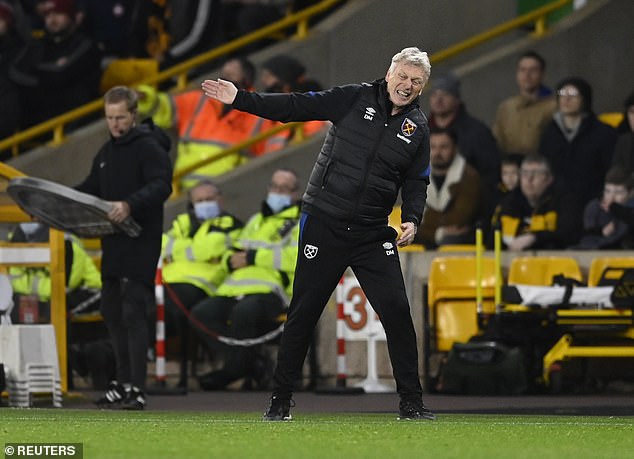 Podence then forced Fabianski into another acrobatic save, this the pick of the Polish keeper’s long list of stops in the match.

And then, finally, the West Ham wall caved in. Wolves zipped the ball about with speed and Podence squared to Jimenez on the edge of the box who unleashed a venomous strike into the bottom corner. It was a peach of a goal.

West Ham stepped up the intensity, Bowen and Antonio having half-chances, but solid defending by Wolves saw out the clean sheet and a huge three points.