Belgian hospital is forced to compensate couple £57,000 after IVF treatment to provide a bone marrow donor for their firstborn led to them having four children

By William Cole For Mailonline

A Belgian hospital has been forced to compensate a couple nearly £60,000 after IVF treatment to provide a bone marrow donor for their first born child led to them having too many children.

The parents had gone to University Hospital in Brussels in need of a bone marrow donor for their first child, who suffers from a rare blood disorder.

Neither of them were suitable and so they chose for the mother to be impregnated with a pre-screened embryo that they hoped would produce a ‘saviour baby’ – or suitable donor.

But in a shocking mix-up in fertility treatment, the mother was impregnated twice by mistake and, though healthy, neither of the twin babies turned out to be a suitable donor.

University Hospital in Brussels has been fined almost £60,000 after giving a Spanish couple too many healthy children from an IVF treatment to create a ‘saviour baby’ for their sick child (stock photo)

Desperate to provide a donor for their child however, the couple went back to Spain where they had a fourth baby who was found to be suitable.

In what is believed to be the first case of its kind, UZ Brussels has now been fined €68,000 (£57,000) for the mistake after it left the couple ‘shocked’ and risked their ‘impoverishment’ because of the need to have a fourth child.

The extraordinary case was recently revealed in a Belgian medical journal.

In the report it is said the couple had gone to UZ Brussels, which is renowned for its fertility treatment, for help with their son’s genetic blood disorder beta thalassemia.

This requires a bone marrow transplant, but a donor was proving difficult to find. There is however the option to technically ‘create’ a donor child through IVF treatment.

Belgium is one of only a few places in Europe that permits the creation of a ‘saviour baby’ through IVF treatment – as long as the child is also desired, and not conceived purely for medical reasons.

But ruling that the couple ‘wanted two or three children within their family project, but never four’, a Belgian judge ruled the hospital’s accidental double impregnation would require €25,000 (£21,000) compensation for ‘the impoverishment caused by the presence of a fourth child’. 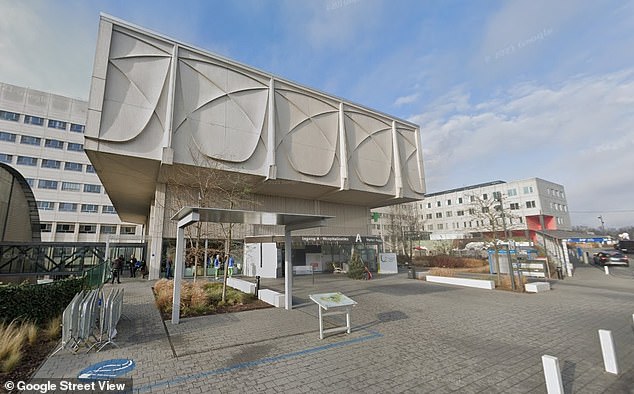 In what is believed to be the first case of its kind, UZ Brussels (pictured) paid €68,000 (£57,000) to the couple for the mistake after it left them ‘shocked’ and risked their ‘impoverishment’ because of the need to have a fourth child

The story has since been confirmed by the hospital.

A UZ Brussels spokeswoman said: ‘It is true that this lady had an embryo transferred that unfortunately did not have all the required genetic characteristics.

‘However, the embryo was healthy and had the best chance of resulting in pregnancy.

‘The parents were compensated and the procedures at the Centre for Reproductive Medicine at UZ Brussels were made even more strict to ensure that the chances of this happening again are as small as possible.’