Catering firm Compass was the top performer on the FTSE 100 after it put dividends back on the menu.

The company will shell out 14p per share – equal to around £250million – in its first payout since Covid struck last spring.

Compass was just one of dozens of heavyweight firms to cut or axe dividends last year, opting for prudence in the face of a pandemic with an unknown end-date.

Portion control: Catering firm Compass will dish out 14p per share – equal to around £250m – in its first payout since Covid struck last spring

But the world’s biggest catering company said the reopening of schools, universities, events venues and sports stadiums has helped it rebound.

Although revenues fell slightly – missing analyst estimates in the process – profits more than doubled to £464million in the year to September. This compared with £210million in the previous 12 months.

Chief executive Dominic Blakemore said its pipeline of new work is ‘exceptional’ – with net new business at a record £2.1billion. 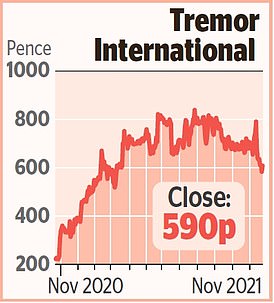 Tremor International shares were in demand after the advertising technology company responded to rumours of a possible takeover.

The AIM-listed group confirmed it has signed a non-disclosure agreement and held talks with an unnamed third party – though it did not say if these were about a deal.

Tremor, which was founded in 2007, said that as a fast-growing tech company it is ‘routinely engaged’ from time to time by other firms.

On Monday Sky News reported that it had held early discussions with a US private equity firm. Shares in the group rose 1 per cent, or 6p, to 590p.

Around half of this has been from companies outsourcing their food for the first time – a key trend that the City believes will help it keep growing. Keith Bowman, analyst at Interactive Investor, said the reintroduction of the dividend was ‘a clear sign of confidence in the future’.

The initial sell-off might have been triggered by a warning – outweighed by the bumper results, but in the company’s statements nonetheless – that there are uncertain times ahead as it faces rising costs, potential staff shortages, disrupted supply chains and inflationary pressures.

This was a running theme in stock market trading updates and results yesterday, as firms emerging from the pandemic said there could be new obstacles ahead. But many saw their share prices make gains despite the new post-Covid travails.

Daily Mirror, Daily Star and Express publisher Reach warned that inflation was pushing up the cost of print production.

Its stock tumbled 7.6 per cent, or 23p, to 279p, despite saying that its digital operations are thriving and that annual revenue is ahead of City estimates.

Heat treatment specialist Bodycote made headway on the market with shares up 3.9 per cent, or 32.5p, to 869p, despite warning that annual turnover would be hit by the supply chain bottlenecks that are hammering the car industry.

Car makers have been slammed by a shortage of microchips and a global shipping crunch.

Sales in the six months to September were up 11 per cent on 2020 – but it was forced to issue a profit warning because it is struggling to get hold of popular products as well as dealing with spiralling raw material costs.

Boss Paul Fineman said it was ‘frustrating to have to report a decline in expected earnings at a time when demand from our customers remains so positive’.

Irish building materials group CRH managed to shrug off ramped up raw materials costs – even though it slowed growth in the latest quarter – with shares in the Footsie-listed group rising 3.5 per cent, up 126p, to 3783p.

Over on commodity markets, oil prices jumped by more than 2 per cent to $81.74 a barrel.

President Joe Biden had attempted to bring prices down when he announced that the US would release 50m barrels of emergency reserves.

But analysts say the OPEC cartel is likely to just hit the pause button on its plans to ramp up production.