By Dominic King for MailOnline

Rafa Benitez has warned Richarlison to keep his emotions in check after the Everton forward was disciplined for receiving a ban for five bookings.

The Brazilian will miss Sunday’s trip to Brentford due to the yellow card he picked up in last weekend’s defeat at Manchester City.

His absence could not have come at a worse time, with Dominic Calvert-Lewin injured and Demarai Gray a doubt for a side who lack goals.

Richarlison has only played eight times for Everton this season — he missed six weeks with a hamstring injury — and the fact he has already accrued enough bookings to be suspended has worried Benitez.

Clubs often fine players who breach disciplinary codes and while Benitez would not confirm that Richarlison has been punished, Everton’s boss made it clear he won’t put up with any more indiscretions.

‘Everybody knows what the process is in a football team,’ said Benitez. ‘He knows, he realised he has made a mistake. But the main thing is to clear his mind and he has to be ready to be an important player for us in the next games. 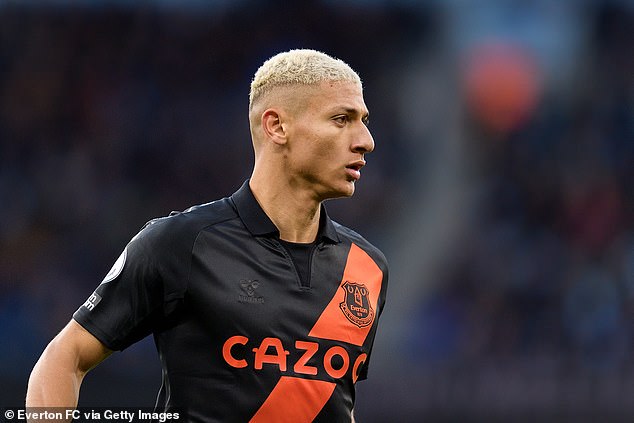 ‘Without Dominic, Richarlison is a key player. He did well last year but he can do better because he has the potential to do better.

‘It is too early for him to get five yellow cards. He cannot react the way he has done in certain times.

‘He shows his frustrations when he reacts and he must keep everything under control. He has to be aware of that — Richarlison has to focus on the games because he is a very good player.’