David Moyes wants West Ham to avoid another ‘boom and bust’ era as they look to establish themselves among the leading Premier League clubs.

The Scot has overseen impress progress since heading back for a second spell at the London Stadium two years ago, when his remit was to keep them up.

A top-six finish followed in 2020-21 and with it a return to European football.

Moyes’ well-drilled and combative side have produced a string of impressive displays this season, including a 3-2 win over Liverpool, as they drove on into the top four.

On the back of those results, however, comes an increased expectation, with some even suggesting West Ham are dark horses to mount a sustained title challenge.

Moyes takes his side to Manchester City on Sunday, which will provide another marker on just how his men stack up against the very best, having booked a place in the knockout stages of the Europa League with a 2-0 win at Rapid Vienna on Thursday night.

Whatever the outcome at the Etihad Stadium, Moyes remains determined to keep everything in perspective.

‘I have said many times I think the manager’s job is to try raise the expectations at football clubs, then you start to say to everybody that you have to calm these expectations down,’ Moyes said. 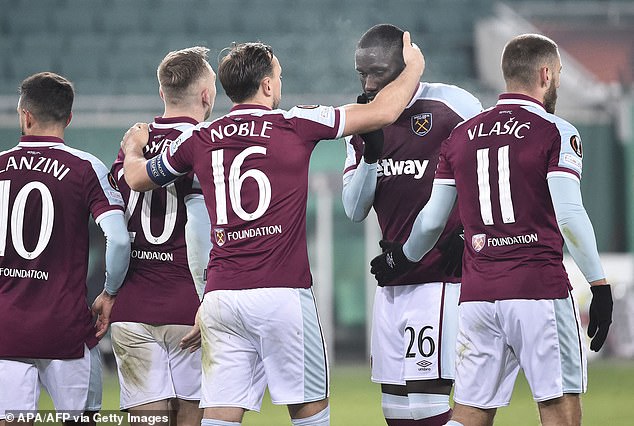 ‘So I don’t think anybody should get too ahead of themselves because the truth is two years ago we were avoiding relegation.

‘We have got to watch that is not boom and bust here.

‘We have got to make sure we get ourselves a continued strategy which keeps continuing to build the club, to get a consistency amongst the group.

‘As we know the Premier League changes so quickly and the quality of the teams is so high.

‘But overall all I can do is say well done to the players and their achievements of what they have done at this present time.’

Moyes admits the rapid improvement has been something of a welcome surprise, but one which now raises the performance bar once again.

‘I want to say yes, because I think we have come on so much, but there is part of me saying no,’ the West Ham boss added. 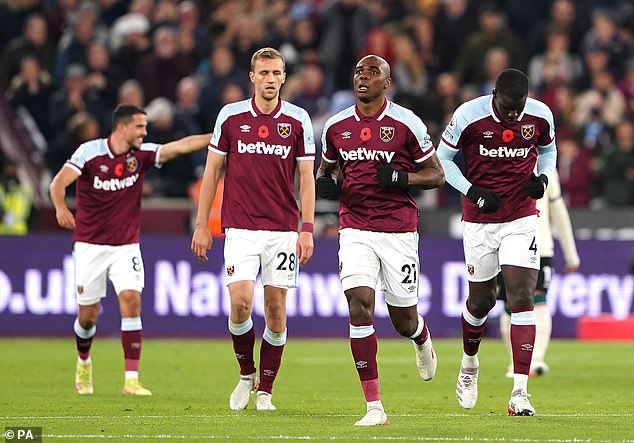 ‘As last season moved on, we found that we were competing with the top teams and getting closer and we finished by qualifying for Europe.

‘So the real challenge that players have got now is to see if we can maintain that and build on it.

‘At the moment I think you would say that after 10 games it looks OK. I think after 20 might be a real good time to say, ‘are we really in there?’ 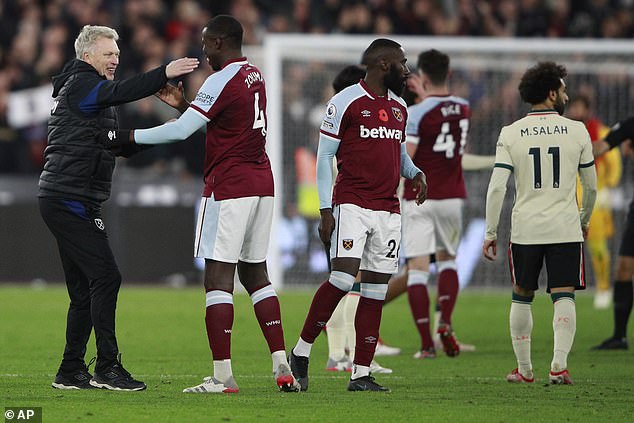 ‘But I think our squad will need to improve as we go on, there is no doubt about that.

‘We need to keep adding – but I know lots of clubs are trying to do that and it doesn’t always work.

‘At the moment I think the players we brought in have made a difference and complement the boys we have got.

‘So it has been a great team effort by all of the players to get us to this position, but the challenge now is can we keep it going?

‘My job is to keep driving that from inside and giving the players the energy which is required to not let them in any way think they have reached their peak.’