The BBC has offered Michael Vaughan a lifeline and ‘expect to work with him again’ after removing the beleaguered pundit from their Ashes coverage in the wake of Azeem Rafiq’s damning allegations of racism at Yorkshire.

Rafiq told MPs last month of the ‘inhuman’ treatment he suffered during his time at Yorkshire, with former England captain Vaughan among a number of figures implicated in the case.

Vaughan, who led England to their historic Ashes win in 2005, denied claims he said ‘too many of you lot, we need to do something about it’ to Rafiq and three other Asian players before a Yorkshire match in 2009.

He was taken off of the BBC punditry team for the upcoming Ashes tour of Australia due to a potential ‘conflict of interest’.

Last week Vaughan apologised for the pain Rafiq experienced during his time at Yorkshire and now the BBC have offered him a future within their punditry team, insisting they have held ‘positive conversations’ with the 47-year-old.

A statement by the BBC on Wednesday read: ‘We’re in regular contact with Michael and have had positive conversations with him in recent days.

‘Our contributors are required to talk about relevant issues, so Michael’s involvement in a story of such significance means it’s not possible for him to be part of our Ashes coverage or wider cricket coverage at the moment.

‘We’re pleased with how our conversations are going and expect to work with Michael again in the future. He remains on contract to the BBC.’

In an interview with BBC Breakfast shown last Saturday, Vaughan said it ‘hurts deeply’ that Rafiq was ‘treated so badly at the club that I love.’

He said: ‘I’m sorry for the hurt (Rafiq’s) gone through. Time I don’t think can ever be a healer in the situation that he’s gone through.

‘But hopefully time can be a way of us making sure that Yorkshire County Cricket Club never goes through this situation again and never puts themselves in a position of denial that they treated a player so badly.

‘It hurts deeply, hurts me that a player has gone through so much (and) be treated so badly at the club that I love. 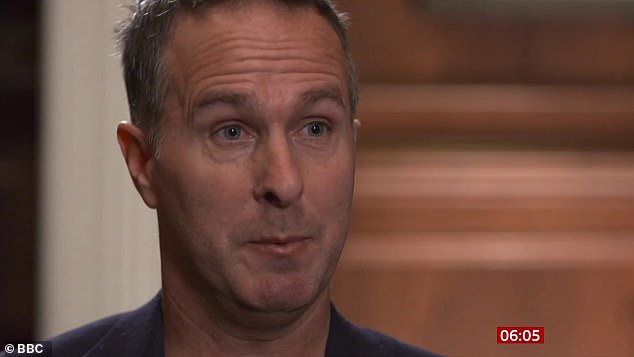 ‘I have to take some responsibility for that because I played for Yorkshire County Cricket Club for 18 years and if in any way shape or form I’m responsible for any of his hurt, I apologise for that.’

Vaughan accepted the BBC’s decision to exclude him from their Ashes coverage, with England’s first Test in Australia starting on December 8.

‘I won’t be doing the Ashes which I understand, the editorial at the moment is all about Azeem Rafiq and racism in the game of cricket. I get that,’ said the 47-year-old.

Rafiq’s account of the incident involving Vaughan was backed by former Pakistan bowler Rana Naved-ul-Hasan and England leg-spinner Adil Rashid, who said they heard the comment. 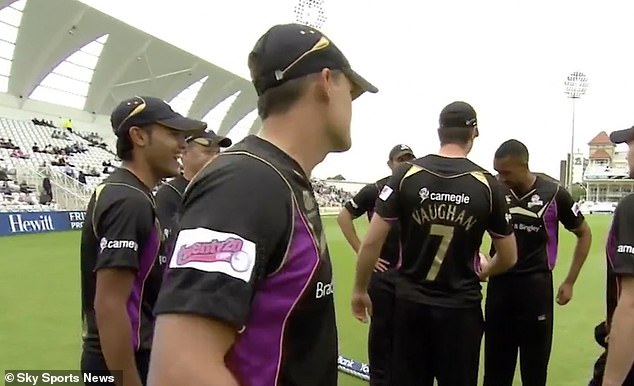 Rafiq claims that Vaughan said ‘too many of you lot, we need to do something about it’ towards Yorkshire’s Asian players before a match in 2009

When asked if the trio were lying Vaughan said: ‘The problem with this situation is that we’ve got too much ‘he said, he said, she said, did they say’ and I think we’ve got to move on from accusations of conversations from many years ago.

‘(The alleged incident) was my last few games and I just remember it clearly that I was proud as punch that we had four Asian players representing Yorkshire County Cricket Club,’ he said.

‘Nothing but a proud, senior, old pro just about to retire and absolutely delighted that Yorkshire had come so far in my time at the club.’