The producer behind Martin Scorsese’s The Irishman is set to make the first ever Hollywood movie entirely funded by non-fungible tokens (NFTs), having secured $1million in backing from a London-listed specialist investment firm.

NFT Studios says it will develop and produce up to six movies a year, three of which are already in last stages of development, as well as limited series.

The latest blockchain-related investment phenomenon, an NFT is essentially a certificate of ownership for an asset that – unlike money – is unique and cannot be replaced like-for-like.

At present, NFTs are typically digital images created and distributed by groups like Bored Ape Yacht Club, and have been known to be auctioned off at the likes of Sotheby’s for upwards of $3million.

It is not the involvement of the creative arts in the world of NFTs. Last week it was revealed that Moscow dancer Natalia Osipova was set to sell the world’s first ballet NFT.

NFT Studios plans to finance its own portfolio of content alongside its ‘community’ of NFT enthusiasts, while securing marketing and world-wide distribution through its ‘experience and strong connections in working with leading Hollywood agencies, studios, and streamers’.

The team behind NFT Studios

Juul is joined at the firm by film producers Thorsten Schumacer and Lars Sylvest, as well as an ‘NFT consultant’ known an 8869.

The business has now caught the attention on London-listed ‘incubator specialising in the market for NFT’s’, NFT Investments, which this morning confirmed it had secured a 20 per cent stake in NFT Studios for $1million.

NFT Studios will operate as a development and production entity out of premises in Los Angeles, London and Vancouver.

The firm’s first NFT-funded feature film is already in the works, with Juul currently producing a ‘spectacular and hilarious adventurous drama based on an incredible true story’, according to NFT Studios, called A Wing and a Prayer.

It is the story of Brian Milton, the first man to fly around the globe in a microlight in 1998.

Executive chair of NFT Investments Jonathan Bixby said: ‘The funding of a new feature film like A Wing and a Prayer with NFTs will revolutionise thinking around the production of new film and media content in the future and NFT Studios is set to play a leading role.

‘I see tremendous appetite from NFT investors in a product like this.’ 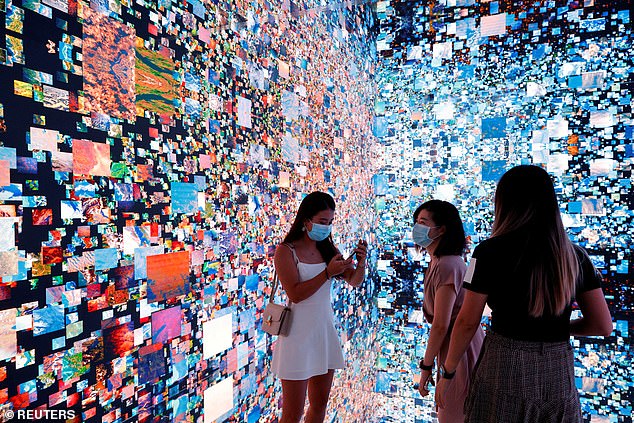 Hong Kong: Visitors are pictured in front of an immersive art installation titled ‘Machine Hallucinations’ by media artist Refik Anadol, which will be converted into NFT and auctioned online at Sotheby’s.

NFT Studios plans to announce its complete slate of fully developed film-projects at the upcoming Berlinale festival in February as well as the Cannes Film Festival in May 2022.

Juul said: ‘We are in the middle of great transition in the entertainment business where traditional ways of film funding and ownership are being uprooted due to the rapid rise of streamers and other digital platforms.

‘NFT Studios has developed forward-looking strategies which will be a positive disrupter in the global movie-making industry and which will further shorten the distance between an engaged community of audiences and high-calibre writers and directors.

‘We want to help stimulate the entire movie-making industry at all levels and offer an innovative and more effective way for screenwriters in particular to regain control of their work.

‘We are developing a new creative platform with a direct connection to participating and investing audiences around the globe.’