Investors were given the strongest hint yet that the Omicron variant is no more than short-term noise.

Opec, the cartel of the world’s most powerful oil producers, led by Saudi Arabia, has decided to stick with a planned 400,000 barrel a day production hike for January.

It had been feared it would scale back the increase to just 200,000 following the emergence of the new Covid strain. But the decision to stick to its guns was seen as a vote of confidence.

Opec, the cartel of the world’s most powerful oil producers, led by Saudi Arabia, has decided to stick with a planned 400,000 barrel a day production hike for January

Opec is one of the important bodies on the planet and its decisions over oil have knock-on effects for other major industries such as aviation and automotive.

Fawad Razaqzada, market analyst at Think Markets, said: ‘With current sentiment being so fragile a cut would have upset investors.

‘Opec are saying we don’t know much about the new variant and we are not changing policy until there is a concrete information.

‘The worst thing would have been a knee jerk reaction, this is the best we could have hoped for.’ 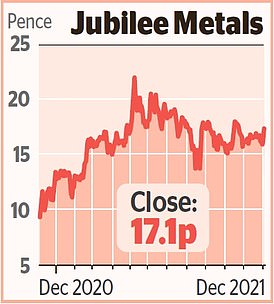 Africa focused miner Jubilee Metals said it produced an ‘exceptional performance’ in its latest financial year as profits jumped by 323 per cent.

Revenues increased 143 per cent in the year to end June, with profits rising to £52million from £12.3million.

Recent moves have seen Jubilee expand into copper in Zambia.

The company is targeting production of 25,000 tonnes of copper per year within the next four years.

The move will also help cool tensions with President Joe Biden, who has called on Opec to ramp up production as the world economy recovers from the pandemic. The US has been releasing barrels from its strategic reserves since November to meet demand.

Notable fallers among the blue chips included Scottish Mortgage Investment Trust as backers questioned some of the firm’s holdings.

Scottish remains a loyal backer of Chinese retail giant Alibaba, despite the firm seeing its shares tumble this year amid an online regulatory crackdown on internet companies by Beijing.

Further down the market, Serco said it expected a ‘significant’ hit to sales and profits next year, as its work running the Government’s Covid-19 test and trace system is expected to ease.

The group has been given a big financial boost from Covid-19 related contracts, with profits expected to jump 38 per cent to £225million in 2021, on revenues 10 per cent higher at £4.4billion.

But it is forecasting a ‘rapid wind-down’ of these coronavirus services during the first half of 2022, which it said will ‘have a significant impact on both revenue and profits in 2022’.

Rupert Soames, chief executive of Serco, said: ‘For all our sakes we hope that 2022 will see sharply reduced need for government spending on Covid-related services and this will reduce revenues and profits in 2022.

However, our strong order intake in 2021 means that we expect to deliver good growth in those parts of our business not involved with Covid-19 services.’

Proceeds from the placing of shares at a price of 320p will go towards the acquisition of tyre servicing business National.