It would be easy to talk about the emotion of this FA Cup final. Taking place on the 100-year anniversary of the ban on the women’s game, there were several poignant moments at Wembley.

But this sport has come too far for cliches. Of course it is important to recognise the past, but what we should focus on most of all is the football, the brilliance of Sam Kerr and Fran Kirby and the success of Chelsea boss Emma Hayes, who now has 11 trophies to her name.

Hayes’ side were beaten by Arsenal on the opening day of the Women’s Super League season but they were better in every department today and this trophy secures the Blues a treble for the 2020-2021 season, due to the final being delayed by Covid-19. 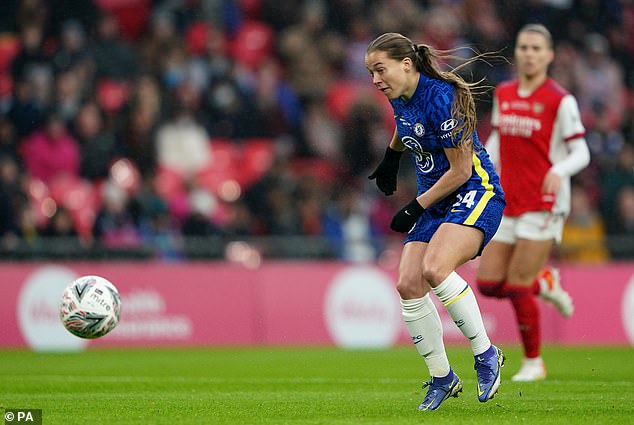 The only disappointment is that this did not break the record attendance for a women’s FA Cup final. Over 47,000 tickets were issued by the FA but only 40,942 showed up.

This is an ongoing battle for the governors of women’s football and their ambitious aim to sell-out a final in the next three years does still seem some way off.

Women’s football is still paying the price for the FA’s 50-year ban and, which was recognised before kick-off when the two captains from the first final back in 1971 brought out the trophy before kick-off.

Elsie Cook, who led out Scottish side Stewarton Thistle that day, was in tears as she came out onto the pitch.

And she was not the only who felt the emotion of this day as Kirby looked overcome after opening the scoring in the third minute.

In November 2019 the England striker was diagnosed with pericarditis, a rare condition that is caused by fluid and inflammation of the sac that protects the heart. 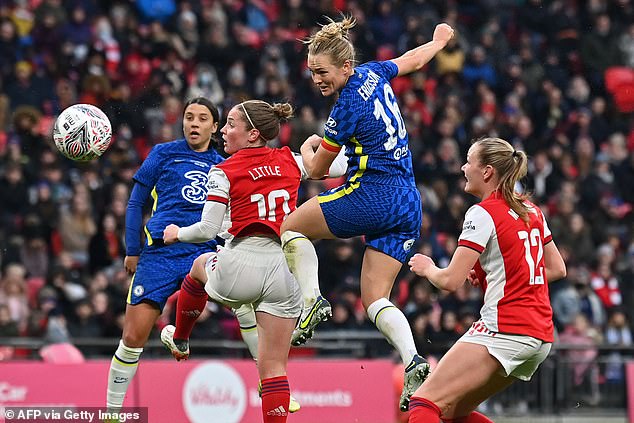 The illness left her barely able to walk and kept her out of the game for eight months and the 28-year-old came close to early retirement. How lucky we are that she is still playing.

Kirby was able to open the scoring following some wayward Arsenal passing inside their own half. Frida Maanum could only divert the ball into the path of Kerr after intercepting Jessie Fleming’s pass.

Kerr’s ball to Kirby then hit the Arsenal midfielder and fell kindly for Kirby, who kept her composure to fire into the bottom left corner past Manuela Zinsberger. 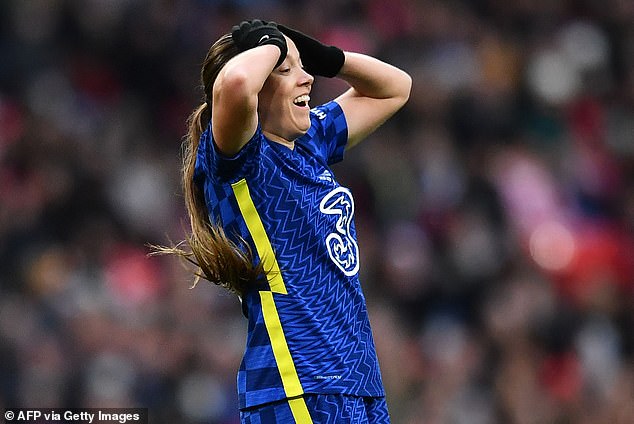 Kerr should have doubled Chelsa’s lead three minutes later after she was played through by Kirby, but the striker’s shot was blocked by the legs of Zinsberger.

The Arsenal goalkeeper was responsible for keeping the score at 1-0 in the first half with a string of impressive saves.

Erin Cuthbert’s long ball down the right wing found Kerr, who cut the ball back to Kirby inside the box but Zinsberger was able to palm her powerful effort wide. 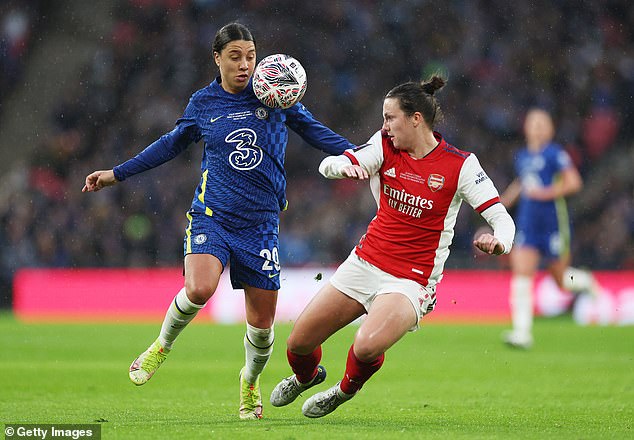 As Kerr cut the ball back to her team-mate, she was clipped by Beattie. The striker did not appeal for a penalty but, had VAR been in use, they could certainly have advised referee Helen Conley to have another look.

Zinsberger was there again to deny Kirby a second mid-way through the half. The forward’s shot from the edge of the box was going into the bottom left corner before the ‘keeper threw out a hand to tip the ball around the post.

Kerr’s last visit to Wembley was for the Community Shield against Manchester City last year and that afternoon she wasted several big chances and her second appearance here started in a similar fashion. 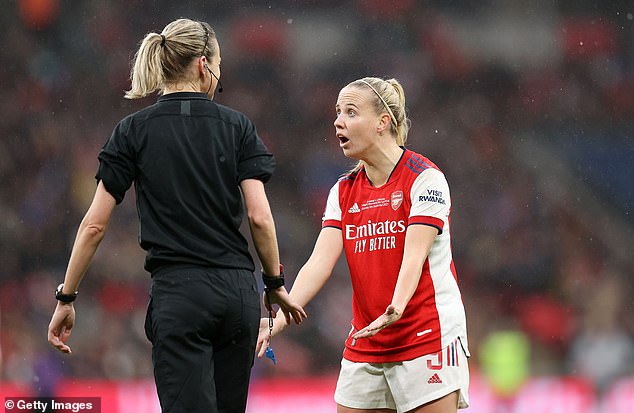 MATCH FACTS AND RATINGS FROM WEMBLEY

After being denied by Zinsberger earlier in the game, she hit the bar 10 minutes before the break.

The striker out-muscled Lotte Wubben-Moy to run through one on one with Zinsberger. Kerr’s chip beat the ‘keeper but hit the woodwork and bounced over. 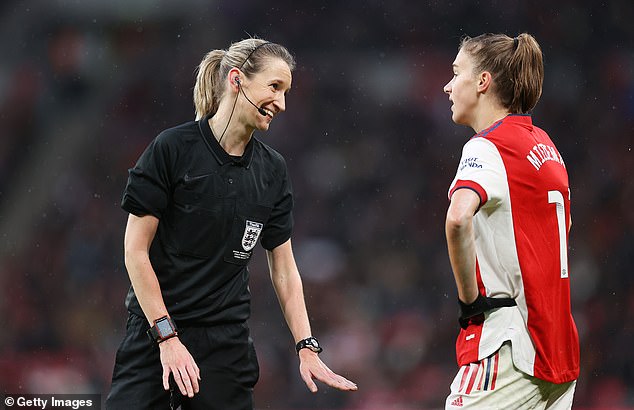 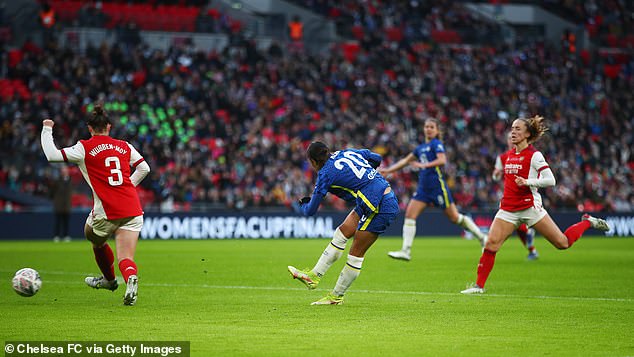 Finally her moment came at the start of the second half. Kirby played the ball down the left to Kerr, who cut inside Wubben-Moy and fired a low shot from the edge of the box which beat Zinsberger at her near post.

It was a shot the ‘keeper should probably have saved but Kerr did not care as she punched the air in a mix of celebration and relief.

Kirby again came close to a second when she danced through the Arsenal defence before curling a left-footed effort towards the top corner. Again, the woodwork saved the Gunners. 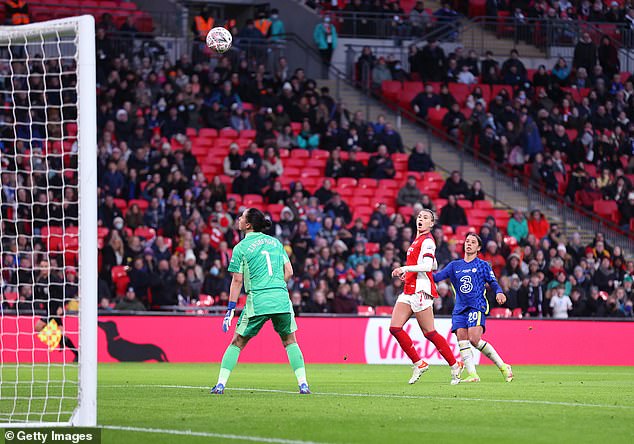 It could not save them when Kerr scored what was the best goal of the afternoon, however.

After being played in by Melanie Leupolz, Kerr ran through on goal and nonchalantly chipped the ball over Zinsberger and into the back of the net. The Australian’s Wembley curse is no more.