‘Drop the ENTIRE team’: Essendon fans fume after Ben Rutten’s side capitulate against Sydney in 58-point hammering – and one fed up Bomber makes his views VERY clear live on TV!

Fed up Essendon fans have blasted their club on social media after Ben Rutten’s side were thumped by Sydney Swans on Saturday night.

The Bombers have endured a rotten start to the season but supporters were optimistic heading into the SCG clash, having picked up a morale-boosting win over Hawthorn last weekend.

However, Essendon simply did not show up in New South Wales, with Buddy Franklin running riot as the Swans sealed a huge 58-point victory. 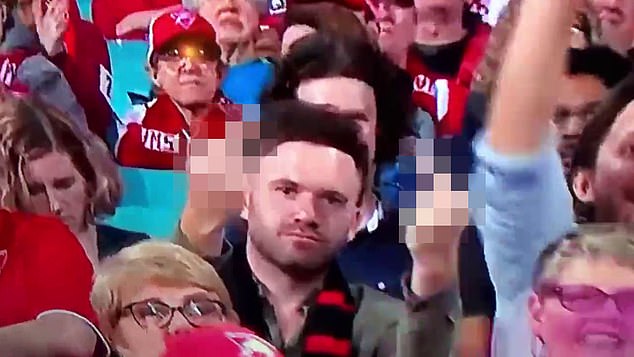 For one unhappy fan, the bloodbath was too much and he was seen flicking the double bird as broadcast cameras panned to the crowd midway through Saturday’s game.

Other fans took to Twitter to vent their fury with the Bombers whose miserable record reads two wins and seven losses.

‘Drop the entire team and bring in the ressies for a little,’ one fan fumed. ‘Probably do much better than the 1s anyways.’

‘The problem with rock bottom is that until you decide enough is enough, you keep on falling,’ another angry supporter said.

‘I really like Rutten but [I don’t know] what else the issue could be the players aren’t playing for him, we have the talent’.

’25 years of supporting this club. Love for it. Haven’t got a lot back. Until the players are invested, it’s so hard for fans to be’.

Another fan had a direct message for Essendon chief Paul Brasher.