Juri Vips, whose contract as test and reserve driver was cancelled by Red Bull, will remain as part of the team’s junior programme, it has emerged.

Ahead of last week’s British Grand Prix, Red Bull terminated the 21-year-old Estonian’s Formula One deal following an investigation into a racist slur he used during a live gaming stream.

But it is understood Vips, who apologised ‘unreservedly’ for using ‘entirely unacceptable language’, has not been stood down from Red Bull’s junior pool of drivers.

Red Bull team principal Christian Horner said: ‘We have cancelled our agreement with him (Vips) and that will undoubtedly give him time for reflection.

‘Everybody at some point deserves a second chance, if they can show that they have really learnt from their mistakes.

‘He is a young guy, a young kid, and we will be supporting him – even though he has had his agreement terminated – from a mental health and educational perspective. Hopefully he will learn from it.’

Vips, who joined Red Bull’s junior roster in 2018, was handed his Grand Prix debut in opening practice at the Spanish GP in May.

Juri Vips, who was axed as test and reserve driver, will stay with Red Bull’s junior programme

He is due to complete his Formula Two season with Hitech GP and finished sixth in last weekend’s feature race. He is seventh in the overall standings of a championship which acts as a feeder series to F1.

‘That is their (Hitech’s) decision and we are not funding that drive in any way,’ said Horner.

‘That is purely the choice of that Formula Two team and they have their own reasons for the actions they have taken.’ 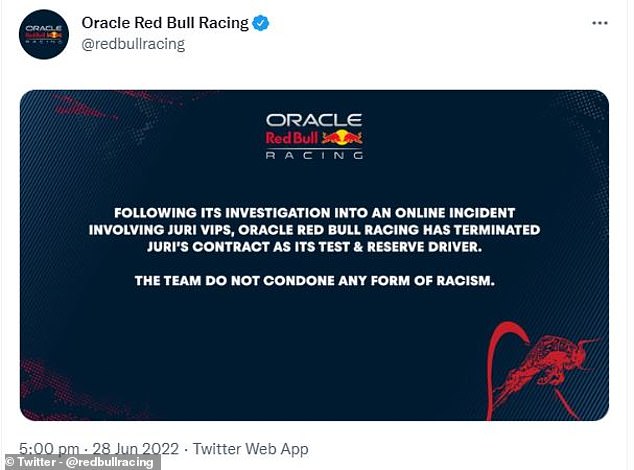 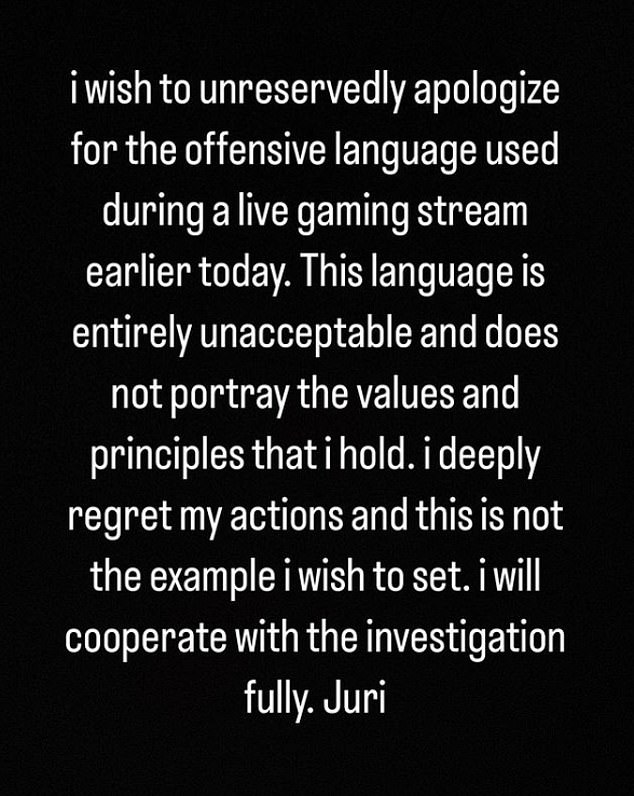 The build-up to last week’s British Grand Prix at Silverstone was overshadowed by the emergence of footage of Nelson Piquet using racist and homophobic language against Lewis Hamilton.

The 69-year-old triple world champion has been banned from the F1 paddock.

Horner added: ‘It is hugely disappointing when you see the type of comments that are made.

‘We are an inclusive team. We have a very young fanbase, possibly the youngest following in Formula One, and that is incredibly important to us.

‘And that is why we fully support all of Lewis’ actions and have our own initiatives that are going on internally.’