The shootings both happened about 12.42am at two locations near Water Street, police said in a statement. TV station WISN had a reporter broadcasting from the scene when a barrage of gunfire was heard nearby, sending revelers fleeing for their lives.

The shootings were across the Milwaukee River from Fiserv Forum, where the game was played, and the Deer District plaza, where a crowd of roughly 65,000 had gathered for an outdoor watch party. 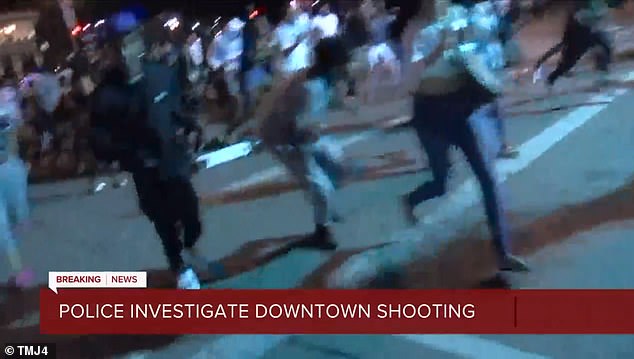 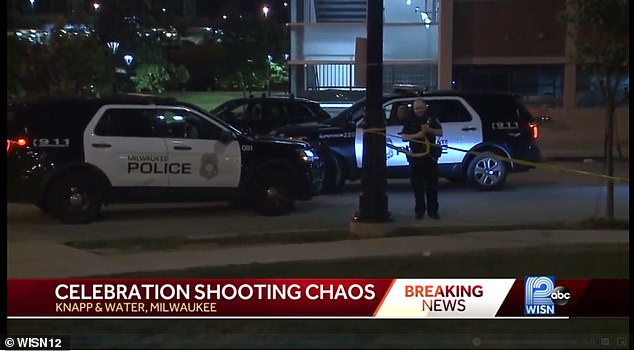 The area where the shootings took place is on a street heavily populated with bars and restaurants.

Following one of the shootings at North Water Street and East Knapp Street, a 22-year-old man had non-life threatening injuries, police said, and a suspect was in custody, reported TMJ4.

In the other shooting at North Water Street and East Juneau Avenue, which police said happened simultaneously and was the result of a dispute, a 19-year-old woman and a 32-year-old man suffered non-life threatening injuries. One person was in custody and other suspects were being sought.

During Tuesday night’s game, a police officer was trampled by people trying to get into the Deer District watch party after the area had reached capacity, Milwaukee police Capt. Jesús Ortiz said in an email. The officer didn’t sustain any major injuries, but reported being in general pain, Ortiz said. 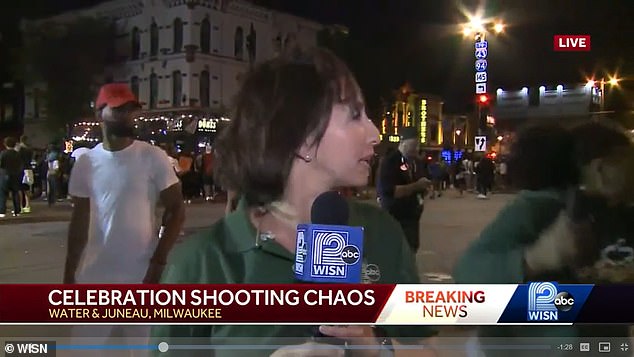 A WISN reporter was broadcasting live when a barrage of gunfire erupted nearby. This screenshot captures her reaction to the sound of gunshots

The chaos in Milwaukee erupted after Bucks star power forward Giannis Antetokounmpo capped one of the greatest NBA Finals ever with 50 points as Milwaukee beat the Phoenix Suns 105-98 to win the series 4-2.

More than 65,000 Bucks fans packed in to the streets of the city Tuesday night, climbing up light poles and sending metal police barricades crowd surfing over the thousands of people amid the celebrations.

The huge street party comes despite the seven-day rolling average COVID-19 cases surging 160 percent in Wisconsin in the last two weeks alone and the Delta variant continuing to spread across the US. 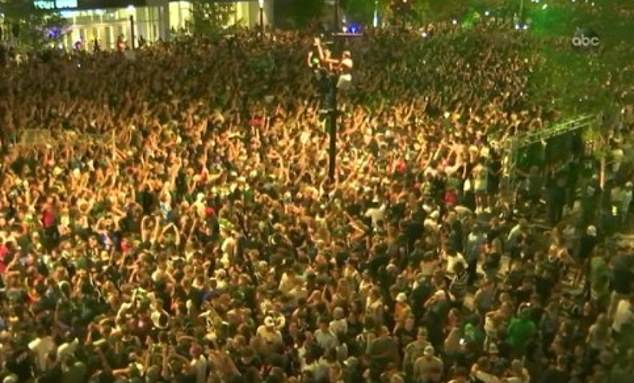 Milwaukee descended into chaos Tuesday night as gunshots rung out in the streets and two cops were injured during celebrations marking the Bucks’ first NBA title in 50 years. Pictured the crowds gathered in the streets 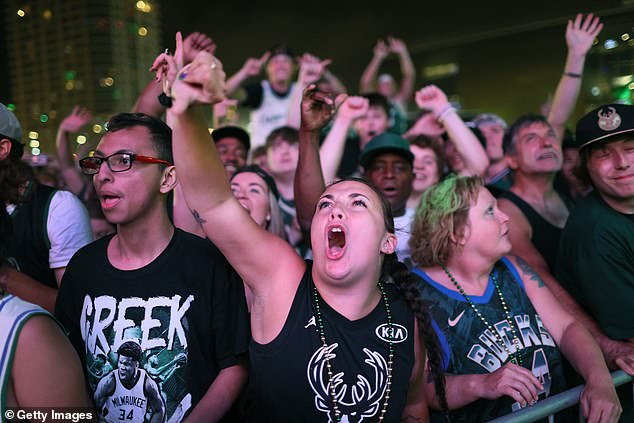 While fewer than 50 percent of Milwaukee residents have been vaccinated, there was barely a mask in sight as thousands descended on the city Tuesday night 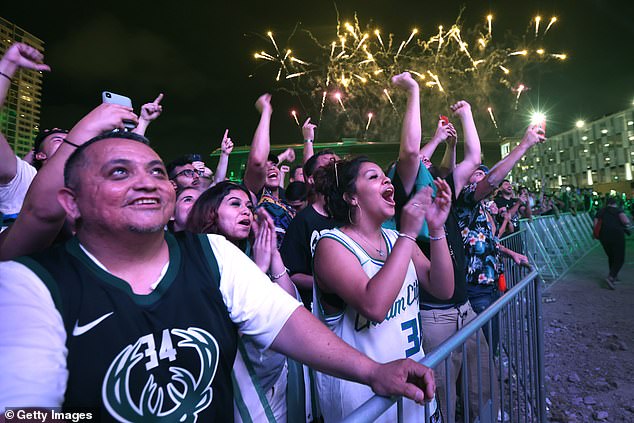 While fewer than 50 per cent of Milwaukee residents have been vaccinated, there was barely a mask in sight as thousands descended on the city Tuesday night.

Fans packed in to the downtown area crowd surfing and chanting ‘Bucks in 6! Bucks in 6!’.

A total of 150 National Guard troops had been drafted in ahead of the game to help local law enforcement while some people traveled from as far as Texas in the hope of being part of the historic win.

Earlier in the night, when the Bucks took home the trophy, several fans jumped into the Milwaukee River to celebrate the win.

The Bucks had announced Monday afternoon the Deer District space would be expanded to welcome more fans to watch the NBS Finals on several large outdoor screens. 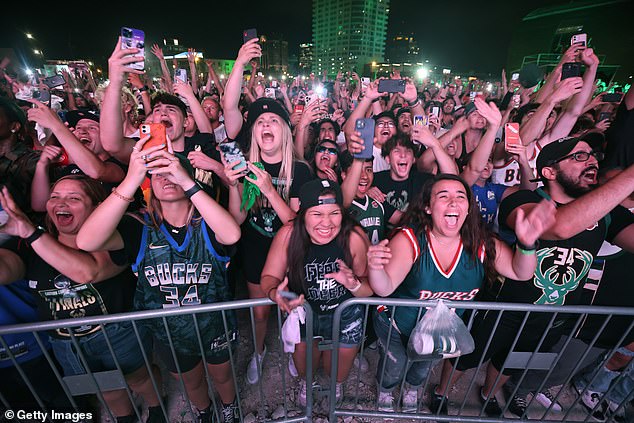 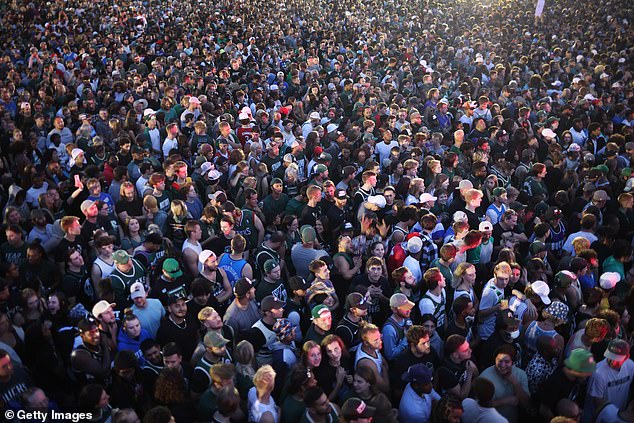 Fans packed in to the downtown area crowd surfing and chanting ‘Bucks in 6! Bucks in 6!’ 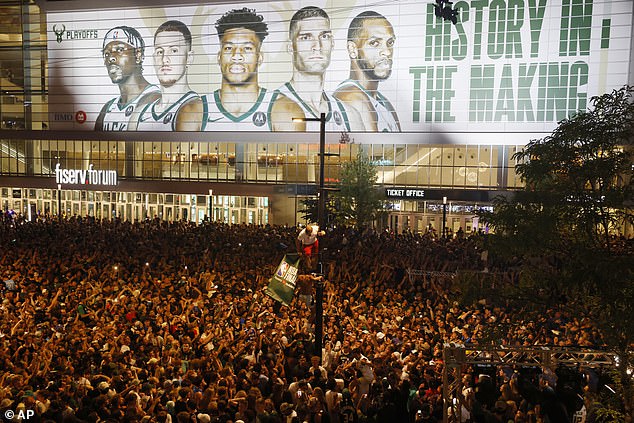 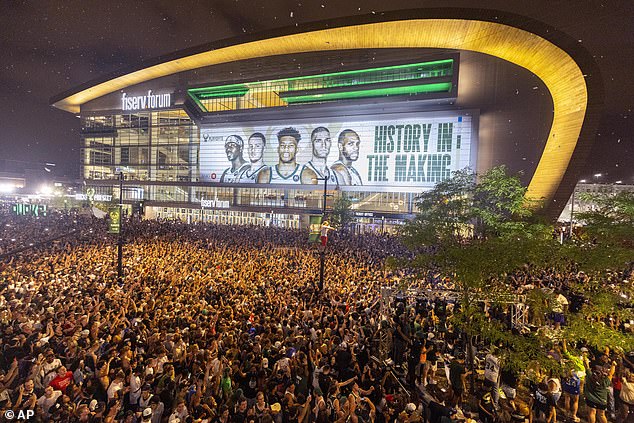 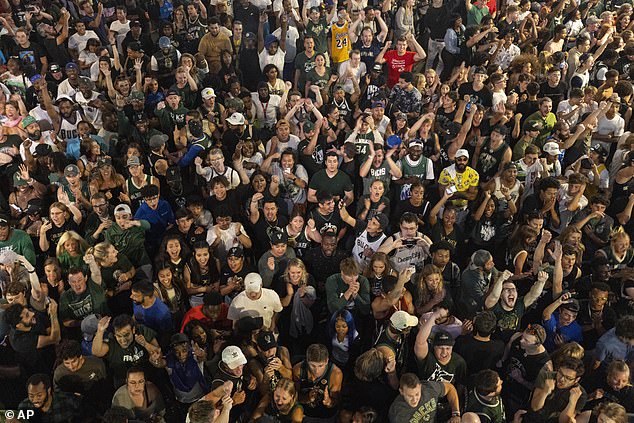 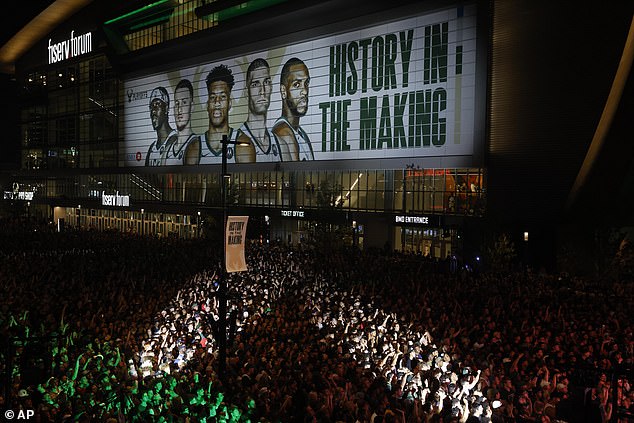 ‘We have the best problem we’ve ever had – we’ve got to expand the footprint,’ Bucks President Peter Feigin said.

‘We’ll move the televisions around. We’re learning about the space and how to accommodate more people.’

This came after the Deer District reached capacity of 25,500 fans for Saturday night’s game.

One fan Dan Dent told NBC15 he didn’t want to miss out on Tuesday’s game which marked the first game the Bucks played for the NBA Championship title since 1971.

‘This is a once in a lifetime event, obviously it’s been 50 years since the Bucks have been here. I want to be a part of history,’ said Dent.

Giannis Antetokounmpo led the Bucks to victory Tuesday night with 50 points in a 105-98 Game 6 win over the Phoenix Suns.

This made the Bucks the fifth team to win the NBA Finals after trailing 2-0.

Antetokounmpo was also awarded the NBA Finals MVP trophy after he scored 14 rebounds and five blocked shots to win the series 4-2. 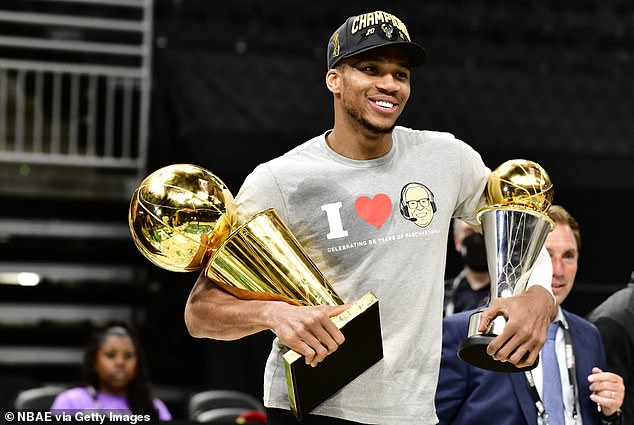 Giannis Antetokounmpo led the Bucks to victory Tuesday night with 50 points in a 105-98 Game 6 win over the Phoenix Suns. The player is seen posing with the Bill Russell NBA Finals MVP Award and Larry O’Brien Trophy 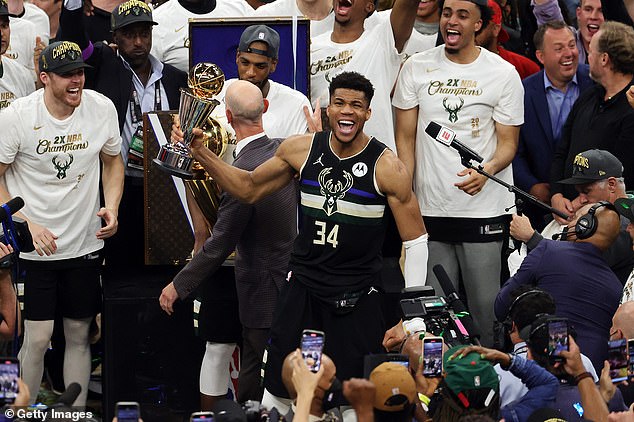 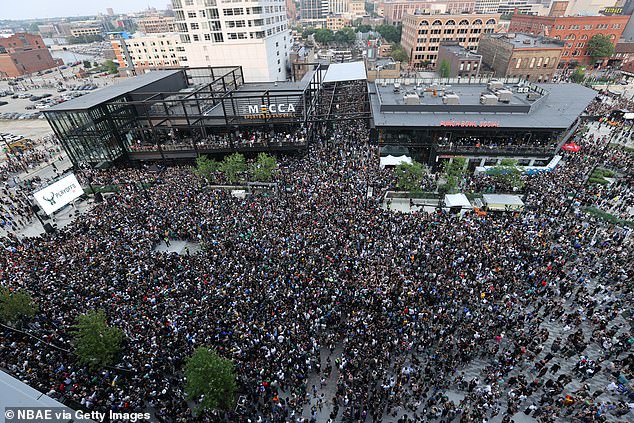 More than 65,000 Bucks fans packed in to the streets of the city Tuesday night, climbing up light poles and sending metal police barricades crowd surfing over the thousands of people amid the celebrations 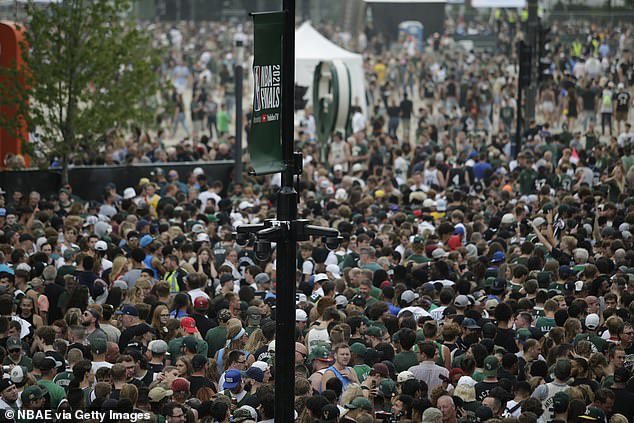 It was the third game this series with at least 40 points and 10 rebounds for Antetokounmpo.

City officials had expanded the outdoors watch area outside the Fiserv Forum arena to accommodate a crowd of 65,000 fans ahead of the game.

This cane on top of the more than 18,000 fans with tickets who packed inside the arena.

The decision to welcome huge crowds to the area around the arena comes as the Delta variant is continuing to spread across the US.

Milwaukee has one of the lowest vaccination rates nationwide, leading officials to launch a door-to-door vaccination initiative last week in a race against time against the more highly-contagious strain.

Health commissioner Kirsten Johnson said less than 50 percent of residents are vaccinated with the Bucks and the city working together to raffle off tickets to the final to people getting vaccinated before the game.

The Health Department’s vaccination clinic for Game 6 ran from 6 pm to 7:45 pm  ahead of the game’s 8pm start. 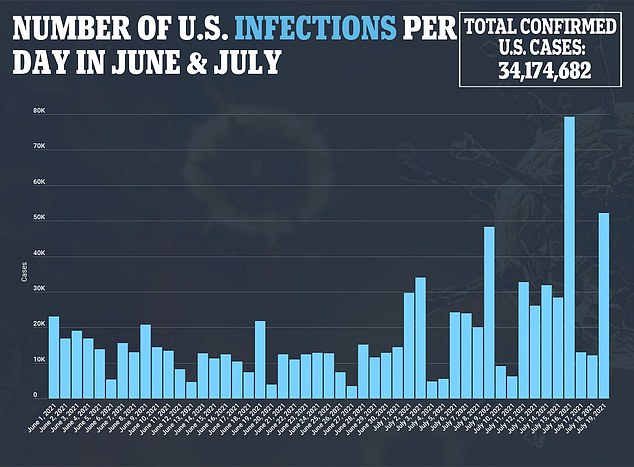 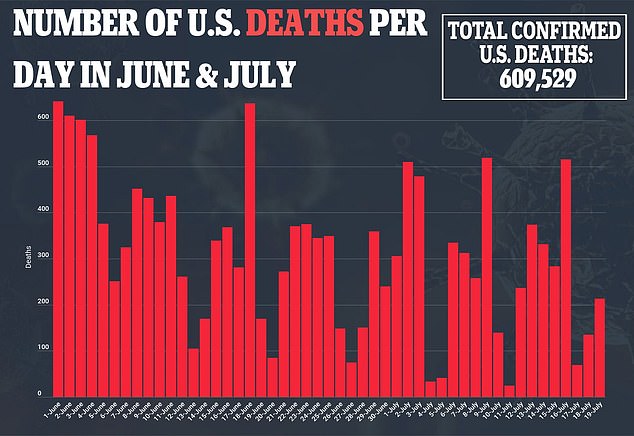 Nationwide, the Delta variant now accounts for 83 percent of all new infections.

Just two weeks ago, this figure was around 50 percent of new cases.

The spread of the strain has pushed cases up 224 percent nationwide in the last three weeks with a seven-day rolling average of 34,682 cases recorded Monday, up from the 10,678 average.

Nearly every state – aside from Montana and Iowa – and the District of Columbia have seen infections rise in the last week, according to a DailyMail.com analysis of Johns Hopkins data.

With cases rising once again, US Department of Health and Human Services Secretary Xavier on Monday renewed the order that declares the COVID-19 pandemic a ‘public health emergency’.

Deaths aren’t rising at the same rate as cases though, thanks to the vaccine rollout. 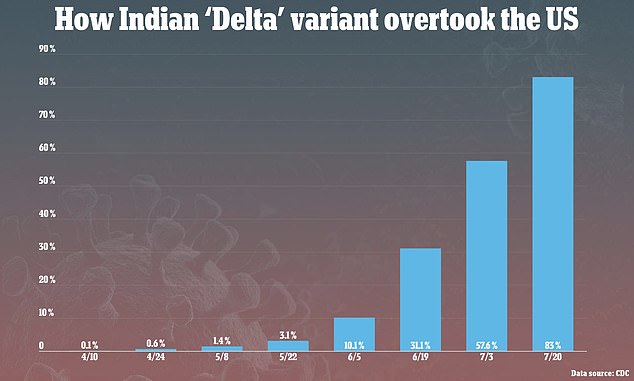