Liam Fox was beaming. The then international trade secretary was posing happily for the cameras, shaking hands warmly with Seng Yee Lau, executive vice-president of Tencent, and heralding another fruitful chapter of Sino-British relations.

They were signing a ‘Memorandum of Understanding’, paving the way for the technology conglomerate, China’s largest company, to forge partnerships with blue-chip UK institutions.

Seng said the deal would give Tencent ‘a landing pad in Europe’.

Tech goliath: Tencent, which is bigger than Facebook and worth close to $1 trillion, this week it swooped on UK video games firm Sumo in a £920m takeover

Also there was Ling Ge, Tencent’s chief representative in Europe, who studied for her PhD at Oxford University. But so much has changed since that day in May 2018.

Fox, now on the backbenches, has since fiercely denounced China’s oppression of the Muslim Uighurs and democracy campaigners in Hong Kong, and has blamed Chinese secrecy for Britain’s Covid death toll.

And Tencent, bigger than Facebook and worth close to $1 trillion, is proving to be a controversial trading partner. This week it swooped on UK video games firm Sumo in a £920million takeover.

But even as it builds up influence throughout universities, businesses, and the fashion and entertainment industries, its purported links to the Chinese intelligence services are steadily emerging.

As the Mail has revealed, CIA sources and the Pentagon have flagged serious concerns, pointing to military investment. Among other stinging criticisms, Donald Trump, in an executive order last year, said WeChat, the firm’s social media app, was collecting ‘vast swathes’ of data, helping the Communist Party keep tabs on Chinese citizens abroad. 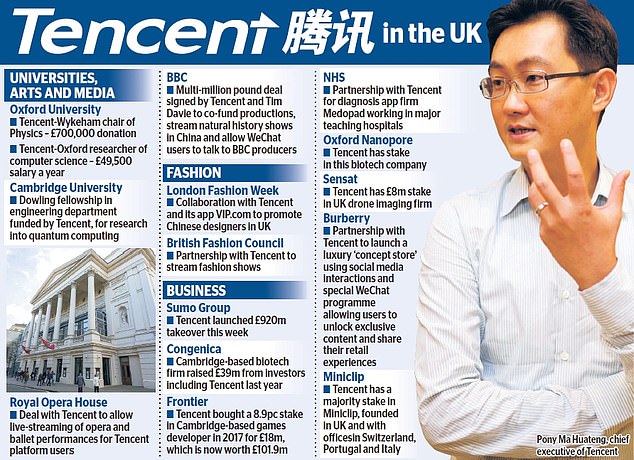 However, Tencent’s influence continues to grow. Oxford University is to rename its prestigious Wykeham chair in physics the Tencent-Wykeham professorship for a £700,000 donation.

Oxford’s chancellor, Lord Patten, the last British governor of Hong Kong, was unaware of the deal until the Mail told him. Like Fox, he is appalled by the recent direction of Chinese policy, saying that all relationships between China and British universities need urgently to be reviewed.

The company is also funding another post, the Oxford-Tencent research fellowship at the Department of Computer Science.

Applicants had to be qualified to conduct research into quantum computers, the powerful next generation machines set to revolutionise not only civilian but military technology. 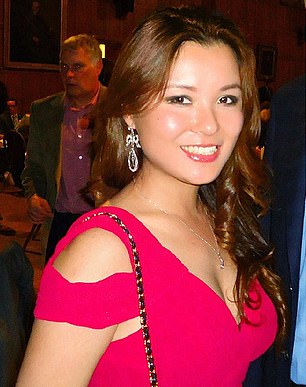 In 2016, President Xi announced that achieving quantum supremacy was a Chinese national goal.

There are other ties between Tencent and Oxford. For example, Li Shen, senior researcher at Tencent’s Artificial Intelligence lab, honed her skills at Oxford’s Visual Geometry Group.

Her research covers the establishment of vast facial recognition databases enabling people to be identified even if spotted in differing poses, and as they age.

This technology could become a powerful surveillance tool for police or the intelligence services. Further Tencent staff working on AI have also studied at Oxford.

Meanwhile, at Cambridge, Tencent funds a Dowling fellowship in the engineering department with an undisclosed but, says the university, ‘generous’ gift. It too is to be spent on research into quantum computing.

Tencent’s interests in our universities are just the tip of a very large iceberg. In the wake of Fox’s agreement, it concluded a wide-ranging deal to stream and co-produce BBC documentaries, signed by the current Director-General Tim Davie when he was the chief executive of BBC studios.

Tencent has also invested in drone-imaging firm Sensat; in SenseWear, a computer mapping firm based at Edinburgh university; in Artificial Intelligence medical diagnostic app Babylon Health; and in Oxford Nanopore, which is working on rapid tests and gene sequencing of the Covid virus.

Critics, however, say there is a darker side to Tencent’s WeChat and that it is used as a tool of repression. 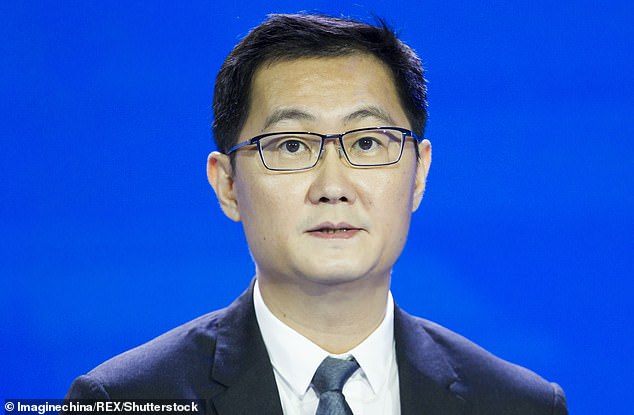 Pony Ma (pictured), is Tencent’s founder, chairman and chief executive, with a personal net worth of more than £70bn and strong links to China’s communist rulers

In 2019, Freedom House, the US-government funded think tank, reported that Luipeng Fei, who ran a WeChat group that shared news from outside China, was jailed for two years.

Uighurs have been targeted, such as footballer Erpat Ablekrem, jailed for using WeChat to communicate with family members who had fled abroad.

Sarah Cook, China research director at Freedom House, said: ‘This is a company that has blood on its hands. Tencent – especially through its WeChat service – is responsible for the detention, imprisonment, and torture of innocent people in China for peacefully sharing information or expressing viewpoints on political, social, and religious topics. Those considering investments from the firm should keep that reality in mind.’

At the top of the company is Ma Huateng, known as Pony Ma, Tencent’s founder, chairman and chief executive, with a personal net worth of more than £70billion and strong links to China’s communist rulers.

This is a company that has blood on its hands

Former foreign secretary Sir Malcolm Rifkind said: ‘If you’re a British university or cultural institution, given the trauma of Hong Kong, Tibet and the Uighurs, you must consider whether this will damage your reputation.’

Tencent, for its part, insists its motives are pure with its UK spokesman insisting: ‘Tencent seeks to be a good corporate citizen wherever it operates. Our philanthropic efforts are just that, and are conducted transparently, in good faith and without conditions.

‘We have deep respect for the rich history and innovative future of the UK’s higher education establishments, and are pleased to support their missions of learning, teaching and research.’

An Oxford University spokesman said: ‘The university has a rigorous due diligence process and Tencent has been approved as an appropriate donor by our independent Committee to Review Donations and Research Funding, which includes independent, external representatives.

‘Our donors have no say in setting the research and teaching programmes of the posts they fund, nor do they have any access to the results of research, other than publicly available material.’

Cambridge did not respond to a request for comment.