Olympics organisers tell winners NOT to bite their medals on the podium as they pose for photographs – because they are actually made of recycled mobile phones!

By Shannon Thaler For Mailonline

Victory must taste pretty great – or at least that’s what it seems each time an Olympic winner bites into their medal while posing for photos on the podium.

Now Tokyo 2020 Olympics organisers have taken to Twitter to remind athletes that the medals are ‘not edible, and are actually made from recycled electronic devices donated by the Japanese public.

‘So, you don’t have to bite them… but we know you still will,’ the cheeky tweet read.

With the Games taking place amid rising Covid rates in Japan, the friendly advice came as overjoyed athletes from many nations copied the old tradition of taking a bite.

Britain’s Adam Peaty and Tom Daley each took a pretend bite out of their gold medals, while Team USA stars and the entire Estonian fencing team all followed suit.

Team Great Britain’s Adam Peaty, 26, bit into his gold medal after winning the 100-metre breaststroke on day three of the Tokyo Games

But maybe they wouldn’t if they realised how many pairs of hands their medals have been through. The Tokyo 2020 Medal Project took two years of national effort to collect enough gadgets to produce around 5,000 gold, silver and bronze medals that will be given out at the Olympics.

The recycling campaign produced a total of 32kg of gold, 3,492.7kg of silver and 2,199.9kg of bronze from nearly 80 tons of old mobile phones, laptops and other devices.

Biting into gold dates back to World War I before the Olympics gave out the first solid-gold medal in 1904. They gave out the last one in 1912. 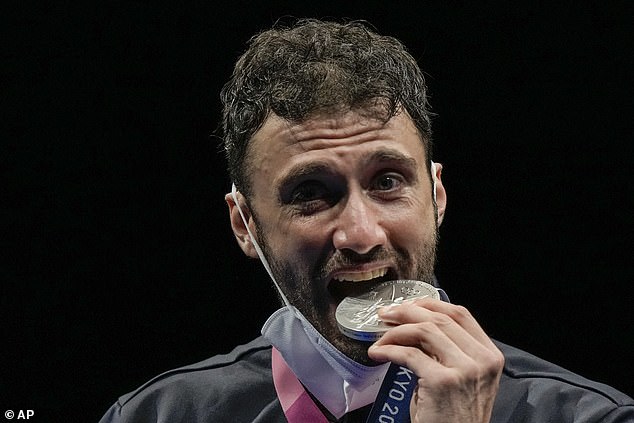 Team Italy’s Luigui Samele, 34, takes a bite of the silver medal he won in the men’s individual final Sabre competition 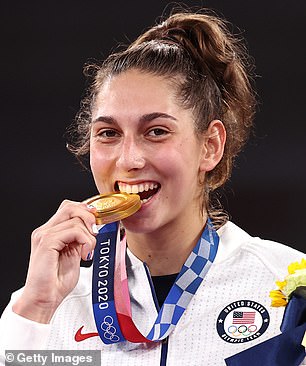 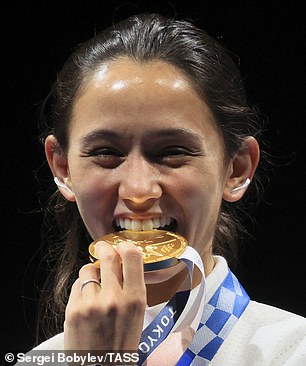 Team USA’s Anastasija Zolotic, 18, poses on the podium after winning the first women’s taekwondo Olympic gold for her country.  Gold medallist Lee Kiefer, 27,  of Team USA bit into her medal at a victory ceremony for the women’s foil fencing individual event 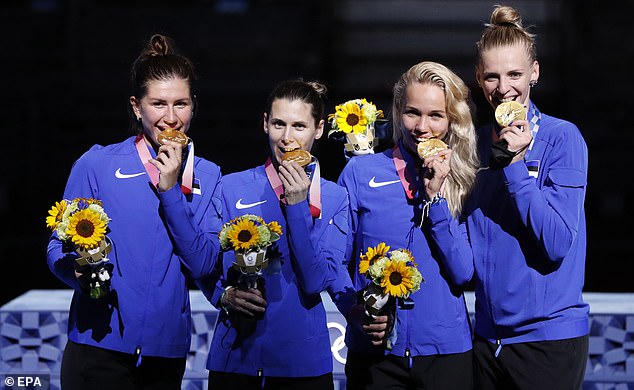 Traders bit into the metal to test its authenticity. Because gold is soft and malleable, if a bite left indentations, the metal was most likely real.

Modern Olympic medals are more like fool’s gold (they’re made of only one per cent gold) and Olympians would break their teeth if they actually tried the bite test.

The practice has become more of a photo-worthy, medal-winning moment and has been a trending podium pose throughout the Tokyo Games.

‘I think they look at it as an iconic shot, as something that you can probably sell. I don’t think it’s something the athletes would probably do on their own.’ 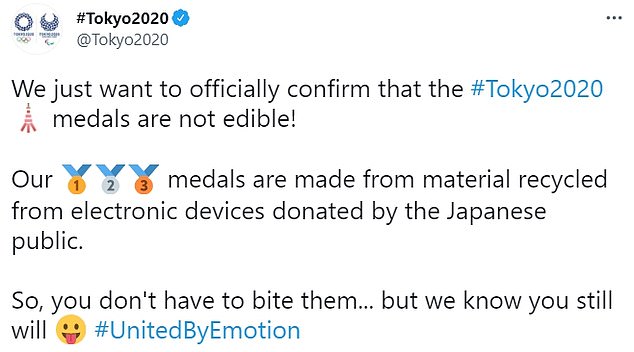 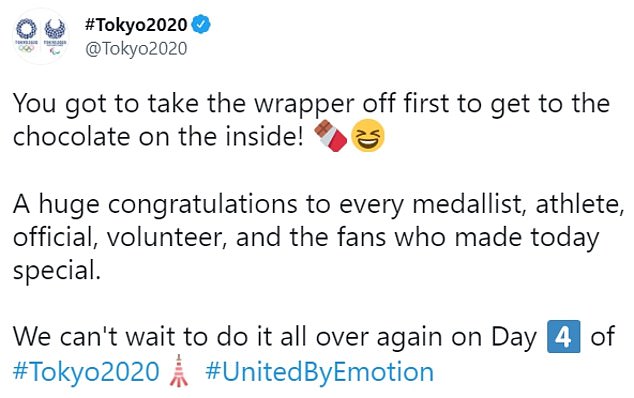 The Tokyo 2020 organisers took to Twitter to remind the athletes that ‘the medals are not edible,’ because they’re made from recycled electronic devices donated by the Japanese public