Bidding battle for Morrisons by private equity giants will be decided by an auction this Saturday, supermarket confirms

The battle to snap up Morrisons will be decided by up to five rounds of bidding at an auction process being held on Saturday 2 October.

The UK stock market’s takeover panel has confirmed private equity giants Fortress and Clayton Dubilier & Rice must now submit formal bids this weekend, but the auction could be scrapped if either side fail to boost their current offers.

A result will be announced by Monday morning, bringing an end to a takeover saga that has dragged on since CD&R first made an approach for the Bradford-based supermarket in June.

Decision time: The battle to snap up Morrisons will be decided by up to five rounds of bidding at an auction process this Saturday

The Takeover Panel said today: ‘On the basis that neither offeror has declared its offer final, such that either offer may be increased or otherwise revised, a competitive situation continues to exist.’

Given that neither bidder had declared its offer final, the London stock market’s takeover panel today said all of the parties had agreed to an auction process to decide the outcome.

After CD&R’s approach in June, rival Softbank-backed Fortress then made an offer of £6.3billion for the grocer in July.

But shareholders felt this was too low and Fortress, which owns Majestic Wines, returned a month later with an increased offer of £6.7billion in August, which the board accepted.

Later that month CD&R returned with an increased bid of £7billion, leading to the board withdrawing their support for the Fortress bid and throwing its weight behind the higher offer. 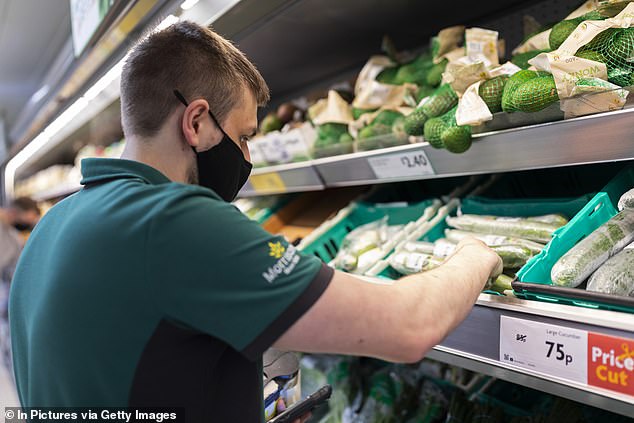 Waiting game: A result will be announced by Monday morning, bringing an end to a takeover saga that has dragged on since June

The fight for Britain’s fourth-largest grocer after Tesco, Sainsbury’s and Asda, is the country’s most high-profile looming takeover amid a raft of bids and counter bids, reflecting private equity’s appetite for UK Plc.

To date, CD&R and Fortress have been forced to make far-reaching pledges to protect the legacy of the supermarket’s founding family, avoid asset sales and protect jobs.

But, critics warned the promises are not legally binding.

Over the weekend, MPs reacted angrily after it emerged CD&R will use a shell company in the Cayman Islands to run the supermarket.

The firm said it will use an entity called Market21 GP Holdings in the Caribbean as it released full details of its plans for the Bradford-based grocer to investors.

But parliamentarians said it ‘beggars belief’ that another major supermarket could be managed through a tax haven, and called on the Government to tighten rules on foreign takeovers. Last year the ownership of Asda was transferred to the tax haven of Jersey after it was bought by the Issa brothers and TDR Capital.

Conservative MP Kevin Hollinrake said he will write to former Tesco boss Sir Terry Leahy, who is heading up CD&R’s bid, for assurances the firm will pay UK taxes.

Margaret Hodge, a Labour MP and campaigner against tax avoidance, said: ‘It beggars belief that one of our biggest supermarkets could soon be bought by a private equity firm using tax havens.’

Darren Jones, chairman of the MPs’ business committee, added: ‘The idea that private equity can just sweep in, buy up British businesses and move them offshore to reduce the amount of tax they pay, without any rules or regulatory interventions, is just madness and an insult to British taxpayers.’

CD&R said the entity that will own Morrisons, Market Bidco, will be registered and incorporated in the UK, adding: ‘Morrisons will remain registered in the UK, headquartered in Bradford and continue to pay taxes in the UK.’