In a major escalation of the post-Brexit row over fishing licences, they warned they could blockade both the port of Calais and the Channel Tunnel.

They accuse the UK of creating a complex and onerous application process and failing to grant them enough permits to make a living.

‘If negotiating fails, we will stop all French and European products reaching the UK, and we will stop all British products reaching Europe,’ said Olivier Lepretre, chief of the powerful northern France fisheries committee. ‘Unless Boris backs down, the Brits will not have so many nice things to eat this Christmas. I hope it doesn’t come to that.’

Families are already racing to buy food for Christmas, including frozen turkeys, party snacks, puddings and chocolate, amid fears of shortages.

Several stores and food industry leaders have warned of gaps and reduced choice for shoppers caused by disruption to global shipping and a shortage of lorry drivers and agricultural workers. The UK will produce around 20 per cent fewer turkeys this year, the British Poultry Council predicts, primarily because processors lack staff.

Parents will also be offered a smaller range of toys because of the crisis, high street chain The Entertainer warned yesterday.

Mr Johnson has insisted this Christmas will be better than last year’s in lockdown – but has repeatedly refused to rule out shortages. Chancellor Rishi Sunak told the Mail last weekend that rolling problems with key goods could continue for months.

Britain has granted only 12 of 47 small French vessels fishing rights in UK waters. British officials say those denied were unable to prove that they had fished in the six-to-12 mile nautical zone in the years before the UK left the EU.

But the French fishermen say the small boats are not fitted with the right technology to prove their historical fishing links and locations. 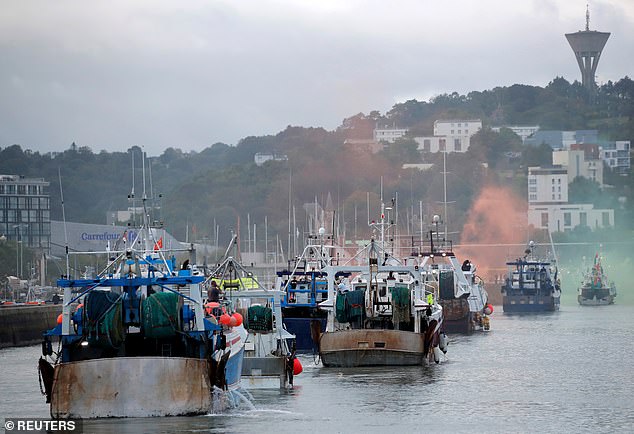 Pictured: French fishermen on their boats attend a protest against offshore wind turbines projects following the call for a national mobilisation launched by the Citizens of the Seas collective, in the port of Cherbourg-en-Cotentin, France, September 24, 2021

Trade between the ports of Dover and Calais is estimated to be worth around £100billion every year. The flow of goods between both accounts for nearly a quarter of the UK’s major port traffic with the EU, according to a 2019 University of Hamburg study on the effects of Brexit.

The row over Channel fishing rights erupted in May, when Britain sent two Royal Navy gunships to Jersey after dozens of French fishing boats vowed to blockade the island’s harbour.

France’s Europe minister Clement Beaune warned the dispute was putting UK power supplies at risk. ‘The Channel Islands, the UK, are dependent on us for their energy supply,’ he told the Europe 1 radio station yesterday. ‘They think they can live on their own and badmouth Europe as well. And because it doesn’t work, they indulge in one-upmanship, and in an aggressive way.’

Mr Beaune said other EU governments could take punitive measures against the UK, such as imposing tariffs. 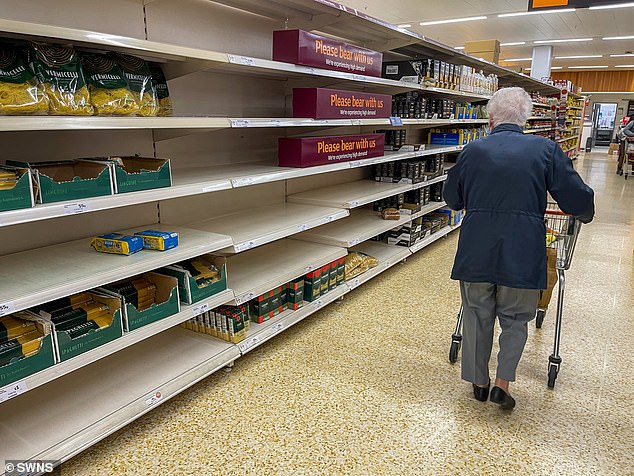 Families are already racing to buy food for Christmas, including frozen turkeys, party snacks, puddings and chocolate, amid fears of shortages

French prime minister Jean Castex also warned that Paris could take legal action under arbitration provisions set out in the Brexit deal. ‘Britain does not respect its own signature. Month after month, the UK presents new conditions and delays giving definitive licences. This cannot be tolerated,’ he told French MPs.

But Brexit minister Lord Frost told Tory conference delegates: ‘We have been extremely generous and the French are focusing in on a small category of boats.

‘We would have liked a different sort of fisheries deal. We get control of our waters eventually but we agreed this deal and we are implementing it in good faith, so I think it is unreasonable to suggest we are not.’

Tory former Cabinet minister David Jones warned that British consumers could boycott French goods if the fishermen imposed a blockade. ‘They may decide to buy Australian or New Zealand wine rather than French wine,’ he suggested.