Kevin Naiqama enjoyed a fairytale finish to his St Helens career as the defending champions were crowned Super League kings for the third successive season, elevating them into the realms of rugby league greatness.

Only the legendary Leeds Rhinos side had previously won three Grand Finals in succession, between 2007 and 2009.

Typically, they took it.

Catalans fought gamely throughout a brutal, bruising encounter and Mike McMeeken’s try early in the second half put them on course for a truly monumental victory.

Saints being Saints, though, recovered from the sinbinning of England winger Tommy Makinson to edge back in front through departing Fijian centre Naiqama’s second try of the match, which Lachlan Coote converted to clinch another famous win.

Woolf’s men had already won the Challenge Cup at Wembley in July and now the Super League trophy will also remain under lock and key in St Helens.

Catalans’ dramatic rise has breathed much-needed passion and romance into the British game.

Having won the Challenge Cup for the first time in 2018 with a stirring win over Warrington at Wembley, Steve McNamara’s side arrived at Old Trafford with the opportunity to be crowned Super League champions. 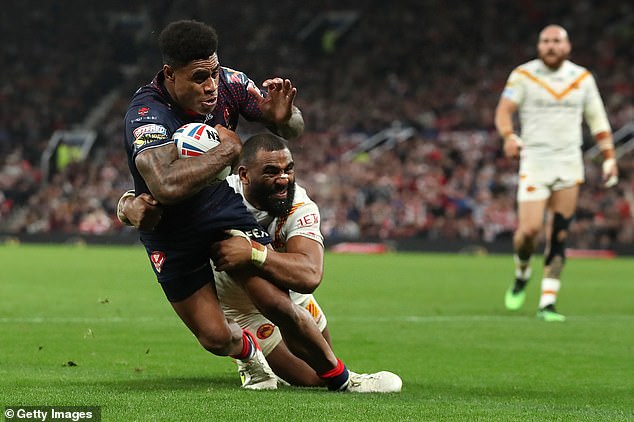 On the field, McNamara has taken a team who narrowly avoided relegation in 2017 to a maiden first-placed finish in Super League this year.

The Dragons were synonymous with underachievement and known for being a club where players went for a decent pay-day and a sun-kissed lifestyle.

Under McNamara, however, they have largely breathed fire.

At Old Trafford, the Dragons were backed by a colourful and noisy following of around official 1,500 supporters, although many neutrals in the crowd were here to support the French side.

Catalans struggled to escape their own half during the opening exchanges as Saints winger Tommy Makinson twice went close to scoring in the right corner.

The Dragons gradually steadied themselves and a penalty from James Maloney put them ahead.

But Saints clinically forged ahead in the 14th minute when full-back Lachlan Coote expertly supported the attack inside the right channel and a neat pass sent Naiqama bursting over the line. 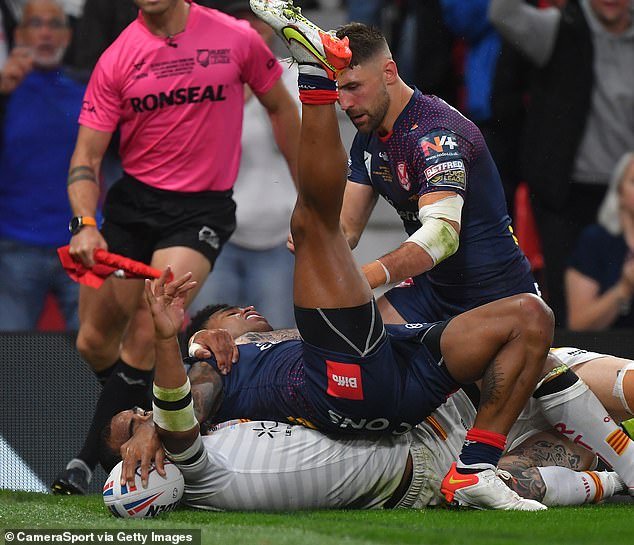 Coote could not add the conversion and the Dragons continued to struggle to make inroads inside their opponents’ half.

They were not helped by conceding three penalties in quick succession, with Coote converting one to make it 6-2.

An increasingly tempestuous encounter saw Catalans fashion an exhilarating move which stretched the St Helens defence before winger Fouad Yaha was denied in the left corner.

The Dragons’ pressure told when Maloney kicked his second penalty, cutting Saints’ lead to two points at the interval.

The hulking Frenchman appeared set to cross the line in the left corner but Makinson thwarted him with a head-high tackle which earned the England international a yellow card. 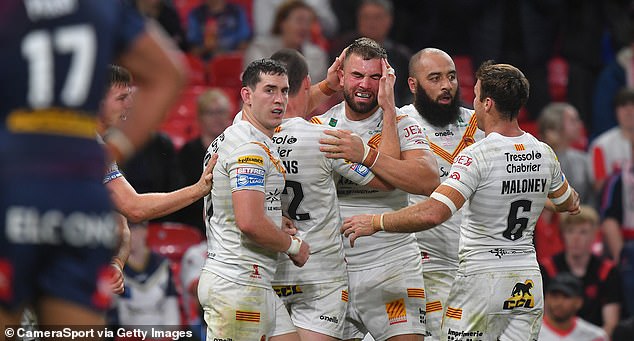 Makinson’s indiscretion marked the first-ever sinbinning in a Super League Grand Final but could Catalans make their numerical advantage pay?

His progress was halted, though, and in the 50th minute Catalans struck with deadly aplomb.

Drinkwater’s clever flighted kick into the right corner was knocked back by winger Tom Davies into the path of second-rower Mike McMeeken, who touched down from close range.

Maloney added the conversion and suddenly McNamara’s men led 10-6, with Makinson still in the sinbin.

He returned in the 56th minute shortly after the hour mark Saints threatened when Joe Batchelor broke down the right flank before throwing an errant pass into the grateful arms of Sam Tomkins.

But St Helens kept probing and were finally rewarded in the 66th minute when Jonny Lomax’s perfectly-weighted grubber kick fell kindly for the onrushing Naiqama to bag his second.

It needed the verification of video referee James Child and Coote converted to put his side 12-10 ahead.

Naiqama’s matchwinning brace earned him the Harry Sunderland Trophy as man of the match.