By Stephen Davies For The Mail On Sunday

Tammy Abraham scored his first international goal for two years and pressed his claims for a World Cup place after England tightened their grip on Group I.

Gareth Southgate’s side need two wins from their final three group games to qualify for a seventh successive World Cup after cruising to a 5-0 victory against Andorra at the Estadi Nacional.

Ben Chilwell, Bukayo Saka, Abraham, James Ward-Prowse and Jack Grealish were on target as England retained their four-point advantage in the race to make it to Qatar.

And Abraham, devastated to miss out on the summer’s European Championship finals, is desperate to stay at the forefront of the manager’s World Cup planning.

‘It was a good night for me and the boys,’ said Abraham. ‘We knew it was going to be tough but we had to stay focused. Luckily we got an early goal, and we knew we’d create chances and the things we did were positive.’

Abraham was set up by Jadon Sancho for his goal and credited a half-time chat with Jadon Sancho, who crossed for him to score.

‘Jadon told me at half-time that sometimes he’s going to cut back on his right and try to find me in the middle of the goal and that I should be ready,’ he said.

Abraham, who has been on fire since moving from Chelsea to Roma in the summer, was so confident he also wanted to take the penalty converted at the second attempt by Ward-Prowse. 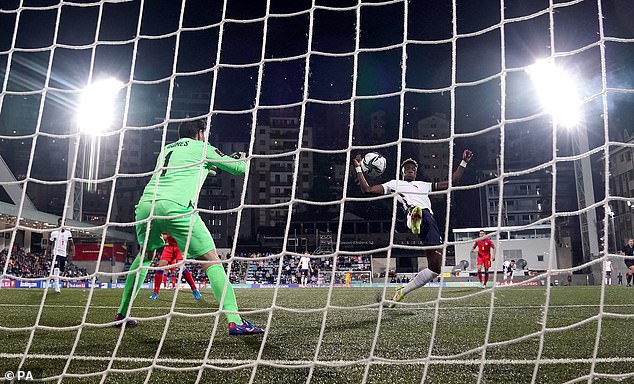 He said: ‘As a striker you always want the penalty. But the gaffer told James he was on pens before.

‘Going to Roma shows that I’m clearly doing the right things and it’s just the start hopefully. I’m playing every week and hopefully I can keep performing.’

England will have to wait until next month to cement their place in the finals after Albania struck late to win 1-0 in Hungary and stay on the tail of Southgate’s side.

Armando Broja, on loan at Southampton from Chelsea, scored the only goal in Budapest.