China has proposed banning all news organisations that are not directly funded by the Communist Party.

The new law, drafted by the National Development and Reform Commission, would ban any private investment in ‘news gathering, editing, and broadcasting’.

It marks the ruling CCP’s latest crackdown on private enterprise, after the country’s booming tech sector and billionaire owners were hammered earlier this year.

China is moving to ban all private investment in media, in just the latest crackdown on business and freedom of speech by leader Xi Jinping’s government (file image)

Laws controlling who can fund news gathering have been in place since at least 2005, according to the South China Morning Post – one of the papers which could be affected by the change.

But the rules have generally only applied to physical papers and enforcement has been lax, allowing online outlets to proliferate with private investment.

The new law, which was drafted by the National Development and Reform Commission and is currently out for review, appears designed to close that loophole.

It is contained within a document called the Market Access Negative List, which outlines sectors where private investment – money that does not come directly from the state or state-owned companies – is prohibited or restricted.

Item six on the list amounts to a broad and near-total ban on private investment in all types of media – from news agencies, to radio and TV, and online content.

It would also ban private companies from live broadcasting anything to do with ‘politics, economics, military, and foreign affairs, or major activities or incidents in society, culture, technology, health, education, and sports.’

Privately-owned media would also be banned from ‘introducing news released by foreign entities’ – suggesting that overseas outlets operating within China could also be caught up in the ban.

The ban would even affect ‘summits and award shows’ hosted by news publishers.

A retired lecturer at Shanxi University, who gave his name only as Luo, told Radio Free Asia that the Communist Party ‘is making sure that it controls its message’. 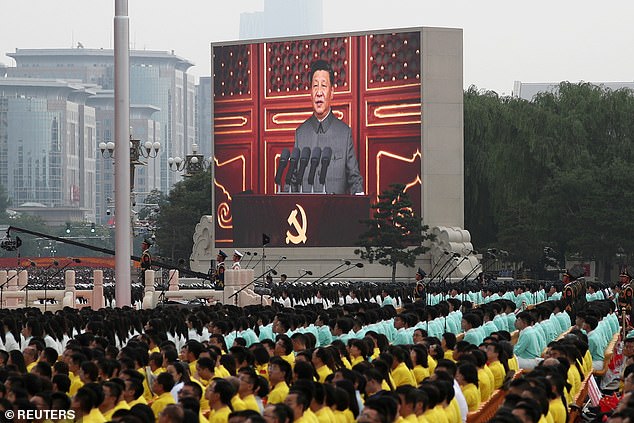 ‘It wants a dominating voice to rule over everything. The message is very clear: don’t mess with the media or try to do anything connected with it,’ he said.

The move comes after the CCP also launched a crackdown on the country’s tech sector – one of its largest and most-profitable.

In public, the party has insisted it is cracking down on wealth inequality, exploitation of workers, and anti-competitive practices.

But many believe President Xi Jinping has grown wary of the growing power of the billionaires who lead the industry, and wants to cut them down to size.

Jack Ma – formerly China’s richest man and owner of the South China Morning Post – is widely thought to have been censured by the CCP after he publicly criticised the way the country’s financial markets work.

The billionaire subsequently disappeared for five months without explanation, had his companies forcibly restructured, and was hit with billions in fines.

Others point out that the companies targeted in the CCP’s crackdown have all raised money on foreign markets, suggesting Xi is trying to limit China’s exposure to the influence of foreign money.

Ride-hailing firm Didi, China’s equivalent of Uber, raised $4.4billon when it debuted in New York in July – but just days later was pulled from app stores in China and banned from accepting new users.