With Manchester United’s stars jetting off to far-flung parts of the globe this week, Ole Gunnar Solskjaer gave eight of the club’s rising stars the chance to impress him.

In the absence of Cristiano Ronaldo, Bruno Fernandes and Paul Pogba from United’s Carrington training ground, it offered the perfect chance for young hopefuls from the academy to train with the remaining first-team players.

United have a proud tradition of giving young talent its chance and Solskjaer has continued that with Mason Greenwood establishing himself in his team and the likes of Anthony Elanga, Teden Mengi, Hannibal Mejbri and Shola Shoretire on the fringes.

But who are the latest crop of United prodigies who have been involved with the first team in recent days? 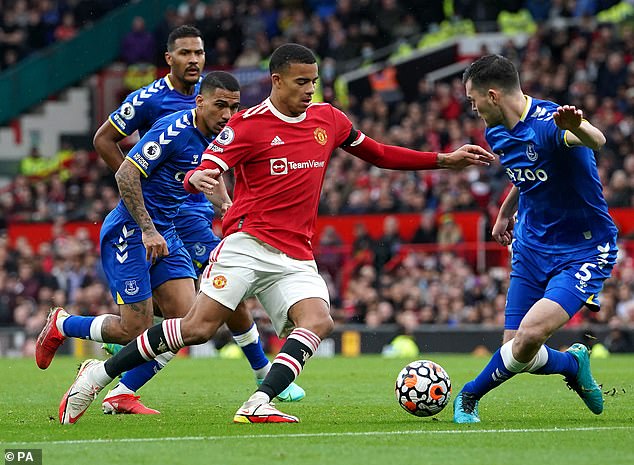 While also a central midfielder, Charlie has different qualities than his tenacious Dad and is more of a technical ball-player.

Savage Jr signed his first professional contract with United back in April and wants to emulate Scott McTominay, who came through the youth ranks to become a first-team regular.

He was a regular for the under-18 side that narrowly missed out on the Under-18 Premier League North title to Manchester City and has since moved up to the under-23 side.

Though born in Leicester, he has chosen to represent Wales at youth level and will hope to follow in the footsteps of his dad, who won 39 caps for his country. 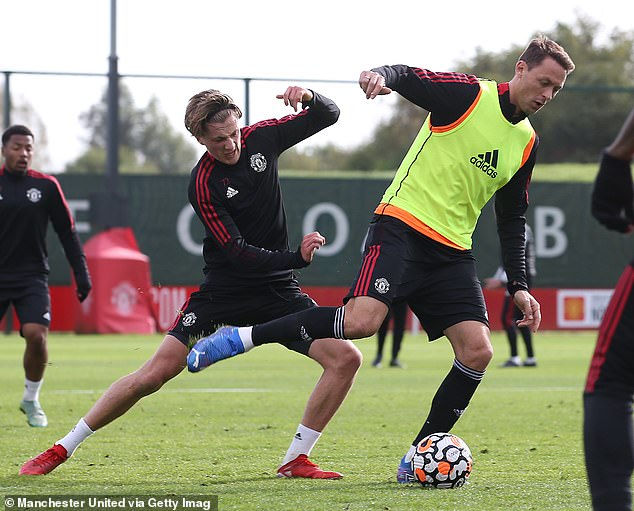 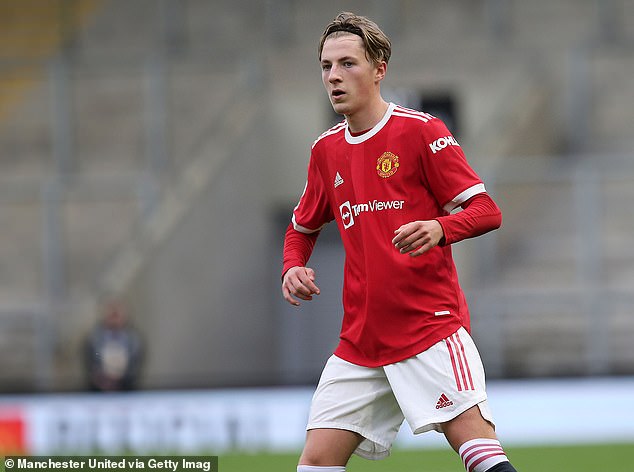 Savage, son of former Wales international Robbie, has stepped up to the under-23 side

United signed the 18-year-old left-back from Real Madrid’s academy last year, beating Manchester City to his signature, and he has certainly lived up to expectations so far.

Fernandez started out with the under-18 team in his first season but was quickly promoted to the under-23s, holding his own there with five assists as he became one of the team’s main creative forces.

United gave Fernandez intensive English lessons when he first arrived in Manchester as well as films about the club’s history and he has not only mastered the language but also his role in the reserves.

Fernandez models his game on that of Real Madrid star Marcelo, one of the best left-backs in world football, and he has formed a good connection with forward Joe Hugill, setting up several of his goals. 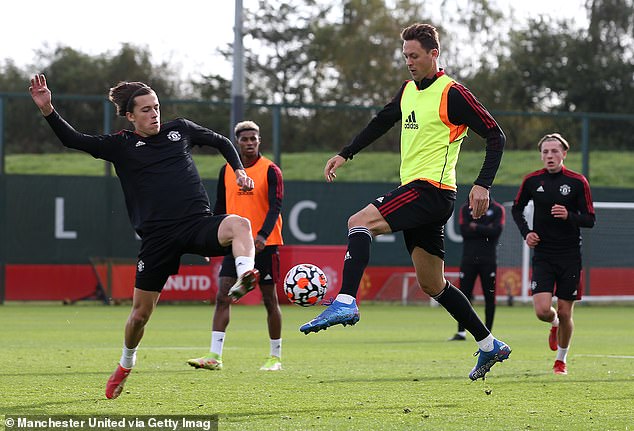 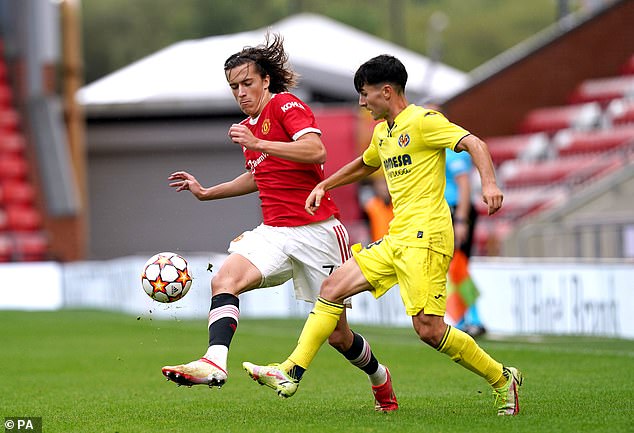 An attack-minded left-back, Fernandez (left) has become a key creative force for the U23s

A signing from NAC Breda in the summer of 2019, the Dutch teenager can operate either in defence or as a defensive midfielder.

United’s academy scout in Holland, Rene Moonen, has described how his jaw dropped when he first saw Hardley in action but he went to watch him dozens more times to be absolutely sure.

It wasn’t long after arriving at United that under-18s coach Neil Ryan saw Hardley was a natural born leader and given his height, aerial ability and comfort in possession, he ticks many of the boxes required to be a good centre-half.

The 18-year-old has played every minute of the under-23 team’s Premier League 2 campaign so far this season, scoring recently against Liverpool in a 3-0 win. 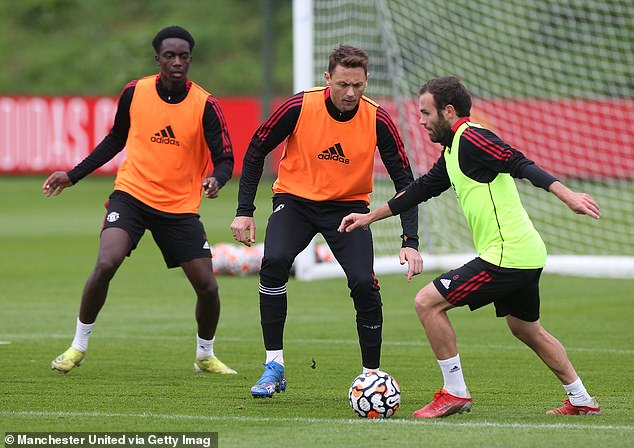 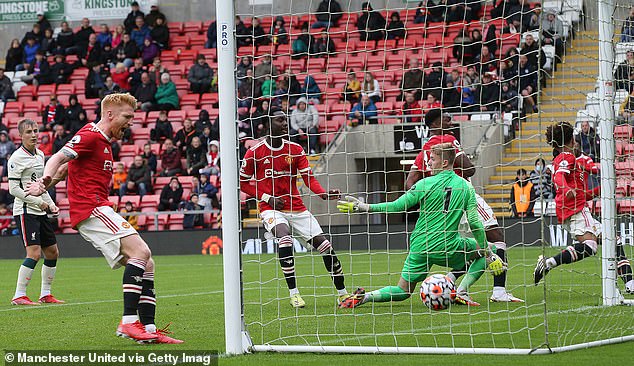 Another promising import from Holland, 18-year-old forward Hoogewerf signed from the famed Ajax academy back in 2019.

The youngster has gone on record to say how impressed he was at the time that United had mapped out a plan of progression to a first team debut and that could only be a matter of time.

His game has been altered slightly since his arrival – originally a centre forward, Hoogewerf has shifted into more of a wide forward role because he is also effective on both wings.

Hoogewerf was outstanding for the under-18s last season, registering 12 goals and 11 assists before also enjoying a first taste of under-23 action.

He has admitted that the English game is far more physical than back home in Holland but clearly Hoogewerf has taken the adaptation in his stride. 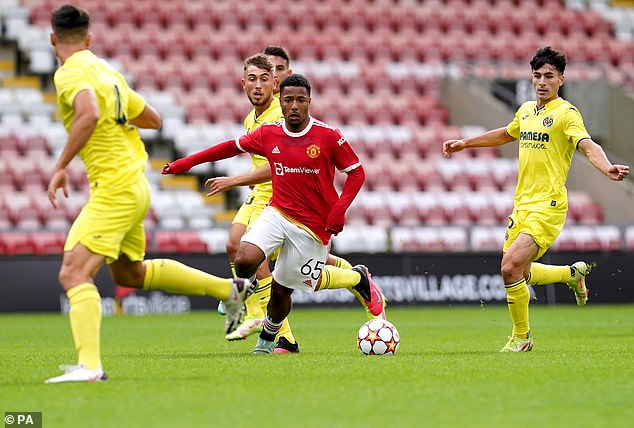 United saw off competition from Arsenal and Tottenham to sign the highly-rated forward from Sunderland’s academy for £300,000 in the summer of 2020.

Hugill was only 16 at the time but quickly made an impression by scoring twice on his debut in a 2-1 win over Blackburn Rovers.

Fast-tracked into the under-23s, Hugill duly confirmed his class with 10 goals in 18 games last season, including four in a bonkers 6-3 win over Liverpool.

Hugill has many strengths but standing 6ft 2in tall at 17, he is able to dominate defenders and win the ball in the air. His controlling touch to bring others into play is also well honed.

He was name-checked by Solskjaer after his four-goal salvo against Liverpool, a match in which all eyes were meant to be on another young prodigy, Amad Diallo. 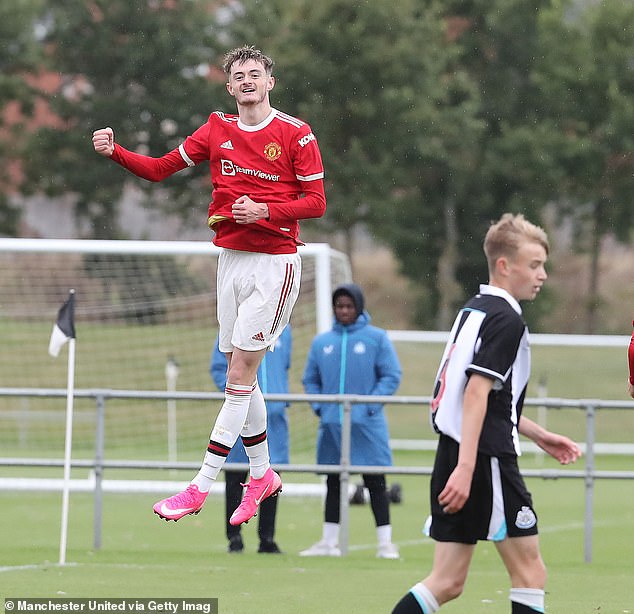 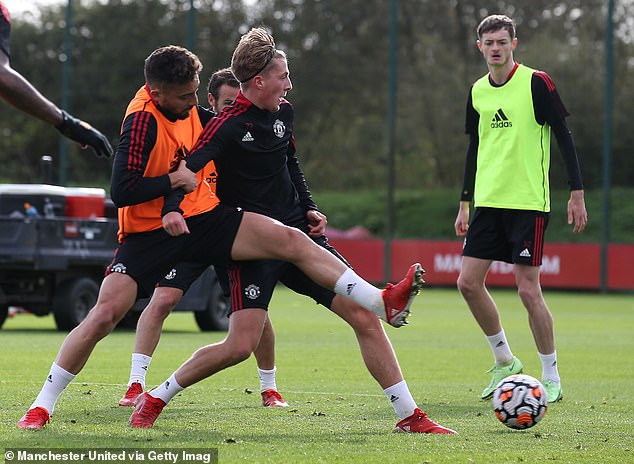 The defender turned down the offer of a three-year contract from Barcelona to leave their academy for United’s in 2020.

Jurado duly signed professional terms when he turned 17 in April and has settled in well at the club, making his under-23s debut towards the end of last season.

The right-back had been in Barca’s famous La Masia academy since the age of seven and holds the record for the fastest goal ever recorded at youth level – just five seconds after kick-off in an under-10s game against Viladecans.

Like Fernandez on the opposite wing, Jurado isn’t afraid to push forward and support the attack.

This season has seen him captain the under-18 side and there are high hopes he can kick on. 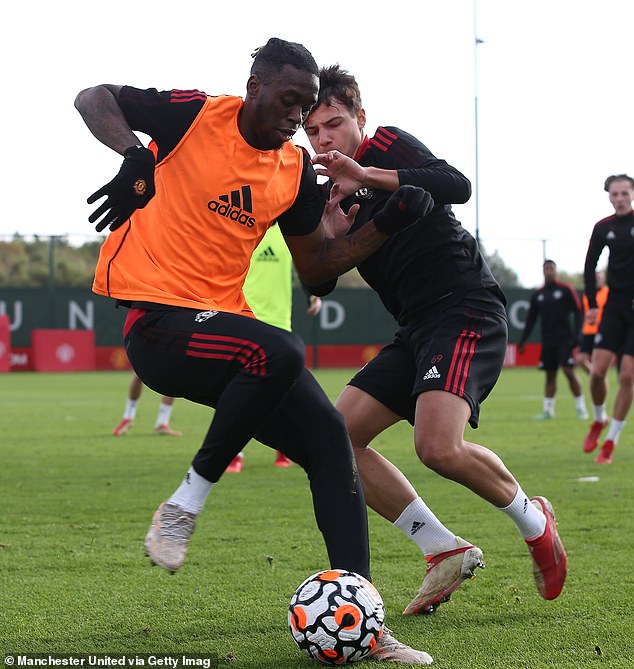 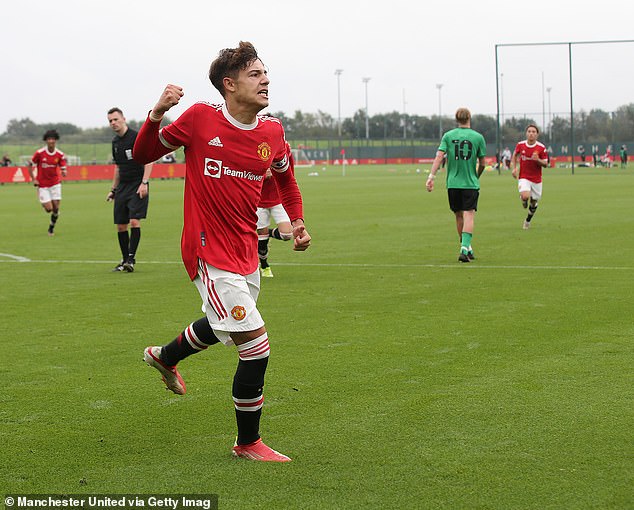 Local lad and boyhood United fan McNeill is credited with 600 goals in youth football – and has played for both United and City.

He was initially at United but then moved across the divide when City paid £12,000 for him back in 2014.

Nonetheless, United believe that would still represent a bargain if McNeill fulfils his potential and he scored 24 goals in 21 games in the Under-18 Premier League last season – a frightening return.

This included all four goals in a 4-2 win over his former club City back in February. Having now stepped up to the reserves, United will be hoping this goal machine continues to fire. 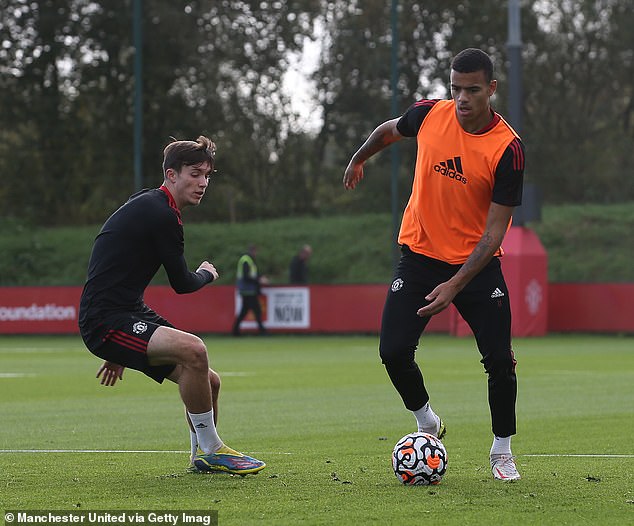 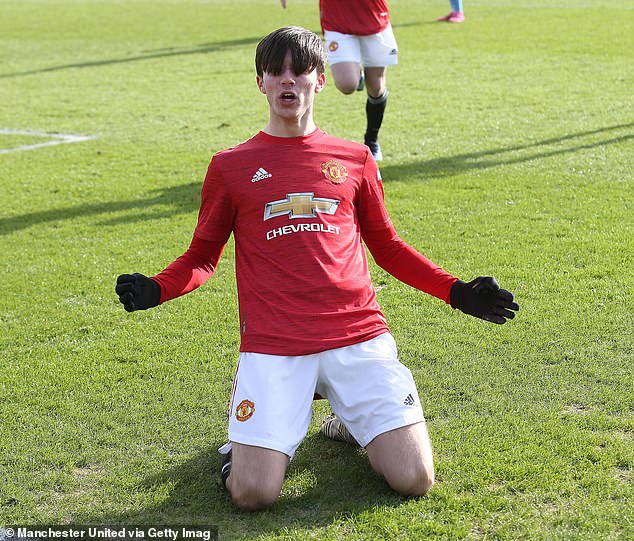 This isn’t the first time Wellens has trained with the first team. Solskjaer involved him before sending a youthful squad out to Astana in Kazakhstan for a Europa League game in 2019.

He wasn’t involved in the trip in the end but the midfielder, who is the son of Doncaster manager Richie, is well-regarded and was linked with Inter Milan before signing a two-year professional contract last year.

Wellens has also proved capable of playing as a full-back and also has a scoring touch, with three goals for the under-18s last season.

He has made the step up to under-23 football in this campaign look seamless with three assists from right-back in the opening seven games of the season. 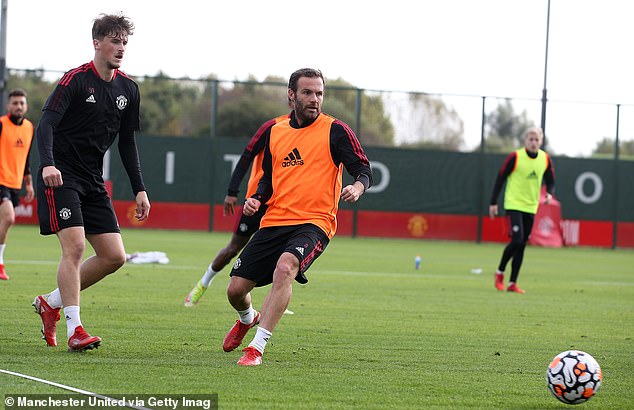 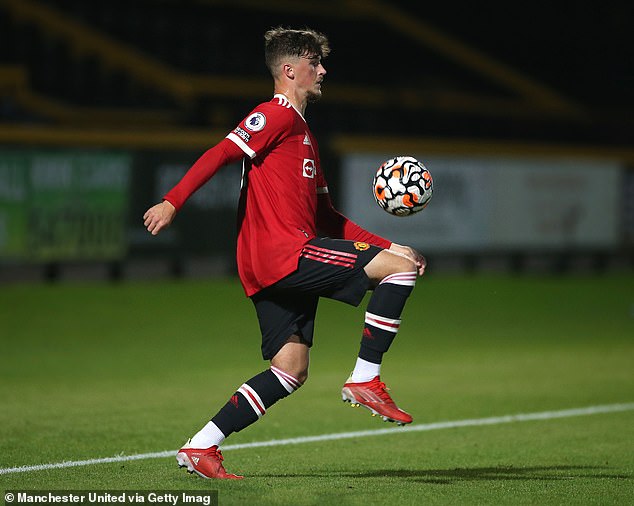