David Turnbull struck a glorious goal on his first appearance back at Fir Park for Celtic as the visitors beat Motherwell 2-0.

The midfielder showed why Celtic paid Motherwell £3million for his services in August last year when he sent a swerving 25-yard effort past a motionless Liam Kelly and into the top corner to put the visitors two ahead.

Jota had scored a well-taken but controversial early opener, with the hosts unhappy with a decision not to award them a foul by referee Willie Collum, who went off injured during the first half.

Benfica loanee Jota opened the scoring for the visitors on Saturday

Celtic went on to win comfortably as they recorded back-to-back away victories after waiting eight months to win on the road in Scotland before their late triumph at Aberdeen before the international break.

There was further cause for celebration for their travelling fans as Celtic reduced the deficit on cinch Premiership leaders Rangers to four points. Craig Halkett’s late equaliser for Hearts at Ibrox was greeted by huge cheers from the Celtic support.

Tom Rogic was restored to the Celtic midfield after coming off the bench to help get that elusive away win at Pittodrie and Boli Bolingoli started after Adam Montgomery missed out.

Motherwell handed a surprise first start to former Rangers midfielder Sean Goss, who struggled to make any impact, and started with Kevin van Veen on the bench. 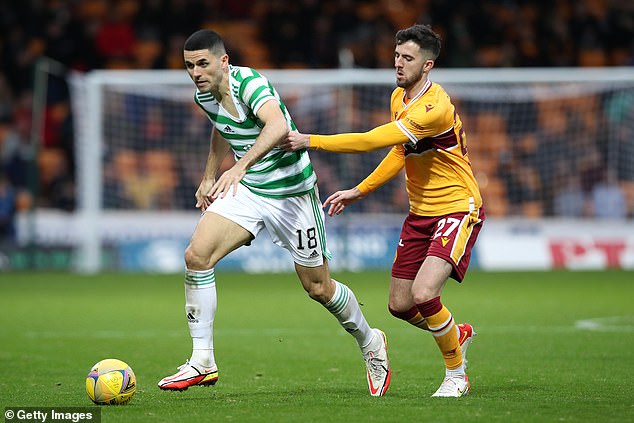 Celtic faced some early concerns. Joe Hart got out of a difficult situation by dribbling past Jordan Roberts and Anthony Ralston cleared from in front of his goal after Tony Watt had got in behind.

Turnbull shot wide from 25 yards with Motherwell outnumbered on the counter-attack before the opening goal came in the 17th minute after Kyogo Furuhashi tracked back to slide in on Callum Slattery. The Motherwell players expected a free-kick but Collum played on.

Rogic played a pass inside Stephen O’Donnell for Jota to run on to and the on-loan Benfica winger slotted the ball inside Kelly’s near post.

Collum soon substituted himself off for fourth official Chris Fordyce after pulling up with an injury. The replacement referee was making his top-flight debut.

Celtic cruised the rest of the half with Motherwell struggling to stop crosses or put their opponents under any pressure. Jota came close to a second when his volley bounced up and over the bar.

The pattern of play did not change after the break. Furuhashi came close to converting Ralston’s cross before Turnbull produced his moment of magic in the 52nd minute after receiving the ball just inside from the left flank. The 22-year-old made no moves to celebrate but was quickly engulfed by team-mates.

Turnbull soon threatened again with a corner that was headed on by Furuhashi and ultimately hit the post before the midfielder forced a save from Kelly. 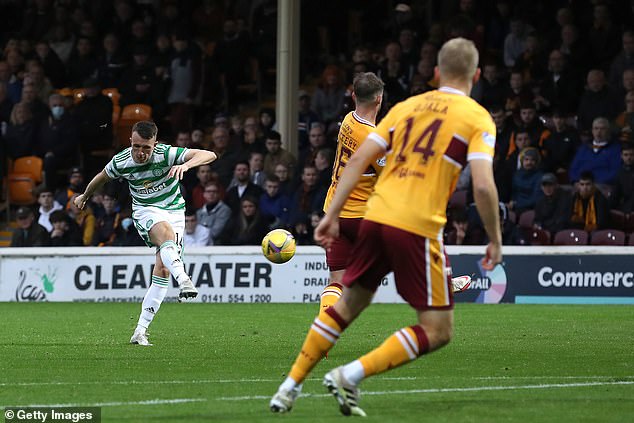 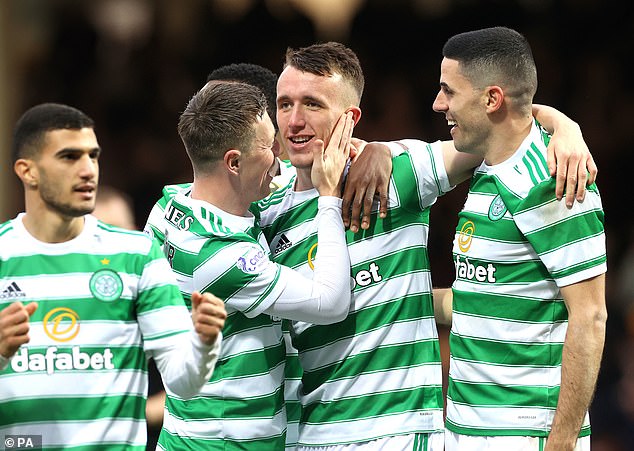 Van Veen came on for Motherwell and appealed strongly for a penalty for handball from Cameron Carter-Vickers after flicking the ball in the air. Fordyce and his well-placed assistant were unconvinced.

The Dutch striker headed wide after Nathan McGinley’s cross was just too high for him to convert, but Celtic regained control.

Their substitute striker, Giorgos Giakoumakis, had a couple of sniffs at goal but could not get a clean contact.