An Indian woman claims to have had her first child at the age of 70, making her one of the oldest first-time mothers in the world.

Jivunben Rabari and her husband Maldhari, 75, proudly showed off their son – whose name they have not revealed – to reporters as they said he had been conceived through IVF.

Rabari has said she does not have ID to prove her age, but told reporters it was 70, which would make her one of the oldest first mothers in the world. However, another Indian woman, Erramatti Mangayamma, is believed to be the oldest after having twin girls in September 2019 at the age of 74.

Rabari and Maldhari, from a small village called Mora in Gujurat, India, have been married for 45 years and have been trying unsuccessfully for a baby for decades.

They were able to have a child through IVF, which can be effective after menopause.

The couple’s doctor Naresh Bhanushali said it was ‘one of the rarest cases I have ever seen’.

Indian woman, Jivunben Rabari, who claims to be 70 has welcomed her first baby, which would make her one of the oldest new mothers in the world 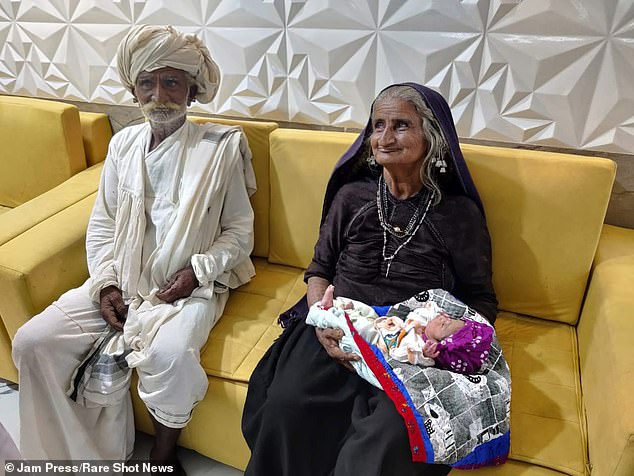 Jivunben Rabari and her husband Maldhari, who is said to be 75, welcomed a son through IVF this month 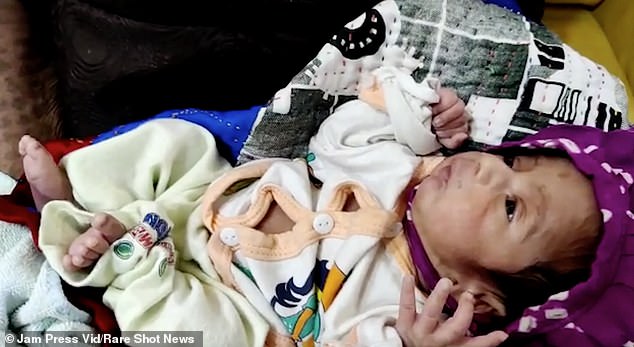 The couple, from a village called Mora in Gujurat, India, have not revealed what they have named their son 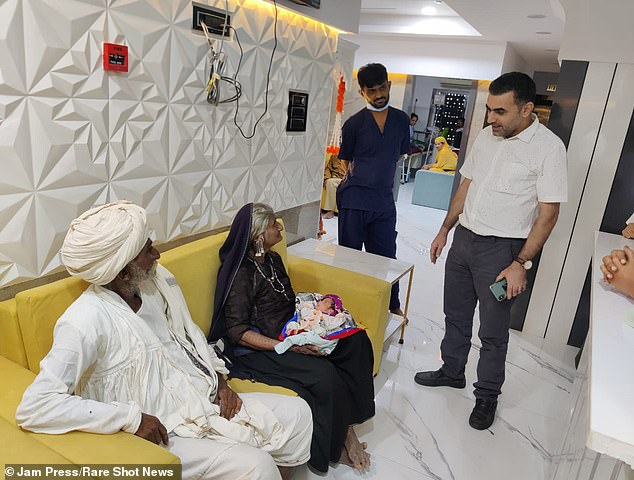 How is it possible for a woman in her 70s to give birth?

The chances of getting pregnant in your seventies naturally are virtually zero.

This is because the overwhelming majority of women go through the menopause between their late 40s and early 50s.

Most women over the age of 45 can’t conceive without the help of IVF, and the older they are, the more difficult it is.

But the American Society of Reproductive Medicine (ASRM) claims that any woman of any age can get pregnant with medical help provided that she has a ‘normal uterus’, even if she no longer has ovaries.

But the success rate is just one in 50 for women over 44, let alone those into their seventies.

Medics use an egg donated by a much younger woman and it is fertilised outside of the body using a man’s sperm.

Eventually, the embryo is placed inside the woman’s womb in the hopes that she’ll become pregnant.

Most clinics in the West have age limits in place, which means rarely will women in their senior years be accepted for the procedure.

Generally the NHS will only support treatment for the women up to the age of 42.

This is done for the health of their baby and themselves.

Babies born to older women are also at an increased risk of getting a genetic disorder or developing mental health problems – including schizophrenia, bipolar disorder, or autism.

They are also more likely to be born prematurely, which can be deadly.

There have, however, been a number of instances of women into their 60s and 70s having children through IVF in India.

Dr Bhanushali said: ‘When they first came to us, we told them that they couldn’t have a child at such an old age, but they insisted.

‘They said that many of their family members did it as well. This is one of the rarest cases I have ever seen.’

The chances of a woman in her 70s getting pregnant naturally are virtually zero due to most women going through the menopause between their late 40s and early 50s.

But the American Society of Reproductive Medicine (ASRM) claims that any woman of any age can get pregnant with medical help provided that she has a ‘normal uterus’, even if she no longer has ovaries.

Medics use an egg donated by a much younger woman and it is fertilised outside of the body using a man’s sperm.

Eventually, the embryo is placed inside the woman’s womb in the hopes that she’ll become pregnant.

There have been several instances of women into their 60s and 70s having children through IVF in India.

Mangayamma is believed to be the oldest woman in the world to give birth after welcoming twins through IVF aged 74.

Mangayamma gave birth to twin girls in a ‘medical miracle’ on September 5, 2019,  following IVF treatments involving a donor’s egg and her husband’s sperm.

The pensioner, of Andhra Pradesh state, revealed she was inspired to try for a baby after her 55-year-old neighbour conceived.

She and husband Sitarama Raja Rao, then 82, welcomed the babies after 57 years of marriage without children, and described themselves as the ‘happiest couple on earth’.

Mangayamma said at the time: ‘I cannot express my feeling in words. These babies complete me. My six decade-long wait has finally come to an end. Now, no one call me infertile anymore.’

Mangayamma gave birth at the Ahalya IVF clinic today under the guidance of Dr S Umashankar.

Dr Umashankar said it came as a ‘surprise’ when the patient approached him last November, but revealed he saw it as a ‘challenge’.

It is believed the Ahalya IVF clinic in Guntur city paid for most of the procedure as medics knew it would be an historic achievement.

Mangayamma conceived in January 2019 after her first cycle of IVF.

She was kept in hospital throughout the pregnancy where a team of ten doctors monitored her health.

The world’s oldest mother is officially listed by Guinness World Records as Bousada de Lara, who was 66 years and 358 days old when she gave birth to twin baby boys, Christian and Pau, in December 2006. 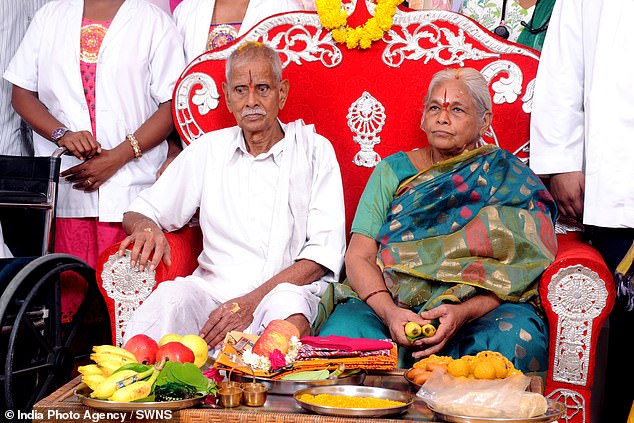 They used an egg from a donor, fertilised with Mr Raja Rao’s sperm and conceived in the first round of treatment

Father Sitarama Raja Rao, 82, pictured with his hands resting on the baby’s cot, suffered a heart attack one day after declaring himself and his wife the ‘happiest couple in the world’ because of the successful delivery of their twin girls by IVF

HOW DOES IVF WORK?

In-vitro fertilisation, known as IVF, is a medical procedure in which a woman has an already-fertilised egg inserted into her womb to become pregnant.

It is used when couples are unable to conceive naturally, and a sperm and egg are removed from their bodies and combined in a laboratory before the embryo is inserted into the woman.

Once the embryo is in the womb, the pregnancy should continue as normal.

The procedure can be done using eggs and sperm from a couple or those from donors.

Guidelines from the National Institute for Health and Care Excellence (NICE) recommends that IVF should be offered on the NHS to women under 43 who have been trying to conceive through regular unprotected sex for two years.

People can also pay for IVF privately, which costs an average of £3,348 for a single cycle, according to figures published in January 2018, and there is no guarantee of success.

The NHS says success rates for women under 35 are about 29 per cent, with the chance of a successful cycle reducing as they age.

Around eight million babies are thought to have been born due to IVF since the first ever case, British woman Louise Brown, was born in 1978.

The success rate of IVF depends on the age of the woman undergoing treatment, as well as the cause of the infertility (if it’s known).

Younger women are more likely to have a successful pregnancy.

IVF isn’t usually recommended for women over the age of 42 because the chances of a successful pregnancy are thought to be too low.

Between 2014 and 2016 the percentage of IVF treatments that resulted in a live birth was: