By Nathan Salt For Mailonline and PA Media

Evan Fournier announced himself in style in New York with a debut performance fit for Broadway to help the Knicks defeat his former side in double overtime.

The Boston Celtics, led by a virtuoso from Jaylen Brown, who finished with 46 points in 46 minutes, looked to have stunned a packed-out Madison Square Garden, only for Fournier and the Knicks to come up clutch late to seal an opening 138-134 win.

‘It was crazy,’ Fournier said. ‘The atmosphere, the fans, the game itself. It was fun to go to two OTs, but I wish we could’ve had the game in the first 48 minutes. It was a dogfight.’ 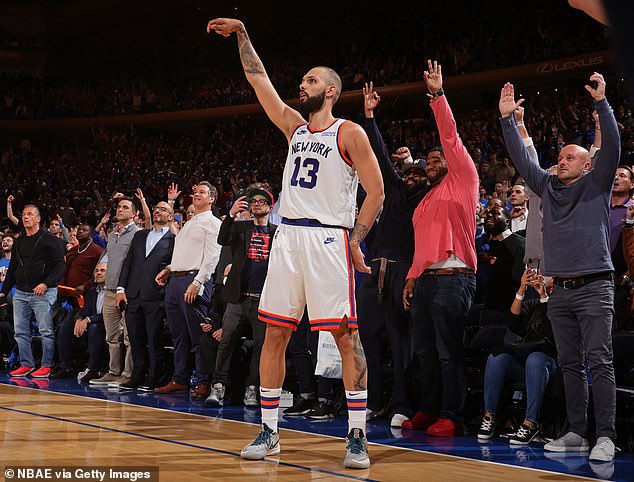 Joining from the Boston Celtics in the off-season, Fournier came back to haunt his former team

Point-guard Kemba Walker also made his Knicks debut and while it started with thunderous applause when he was announced over the PA system, 10 points and three assists proved a much more lowkey return compared to Fournier – not that Walker was left concerned with his own numbers.

‘Energy in this building is second to none. It was unreal,’ the four-time All-Star said of what transpired to be a Game of the Season contender.

‘I don’t even know (how it felt during introductions), so much, so much was running through my mind. I just really couldn’t believe it, just playing for the home team. 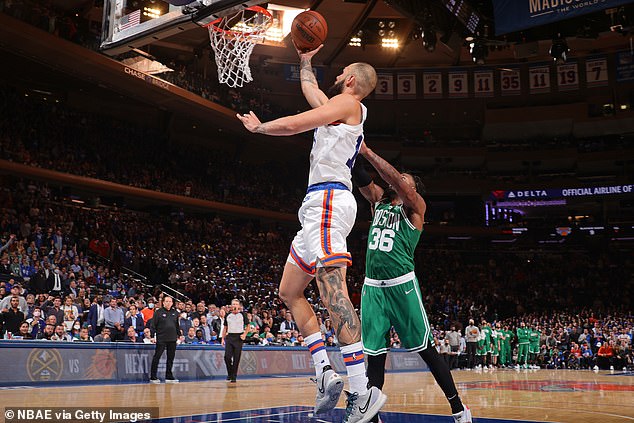 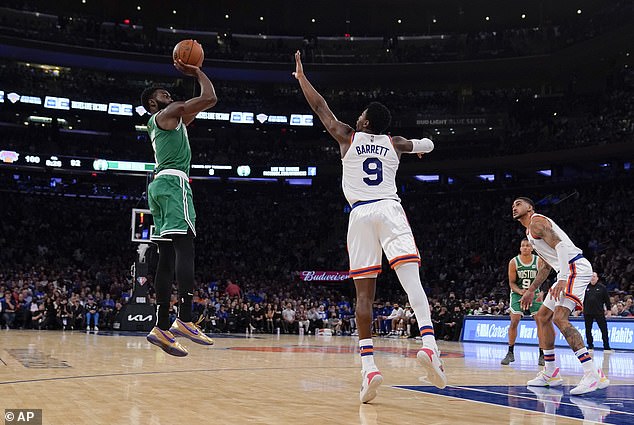 ‘I’m really a kid from The Bronx, born and raised in this city. To put that jersey on for the first time for the real regular season, and being announced, it was definitely an amazing feeling.’

Julius Randle topped the Knicks’ scorers with 35 while Brown, who sent the game into overtime on the buzzer with a three, hit 46 for the Celtics assisted by 20 from Jayson Tatum, whose missed jump-shot at the end of the first period of overtime proved costly.

Elsewhere, Doc Rivers’ Philadelphia 76ers managed successfully to put all the off-court noise around the suspension of Ben Simmons to bed with a 117-97 win over the New Orleans Pelicans.

The Pelicans, without star man Zion Williamson, went in at half-time tied 53-53 before a second half collapse allowed Joel Embiid and the 76ers to take control.

Simmons is the narrative that is swallowing the Sixers after he was given a one-game suspension by Rivers for conduct ‘detrimental to the team’ after he was seen not engaging in a training drill.

‘[The players] have been normal, the only abnormal part is when they have to talk to the media afterwards and they’re asked questions [about Simmons],’ coach Rivers said.

‘It’s about playing basketball and growing together, and they’ve done a great job of that.’ 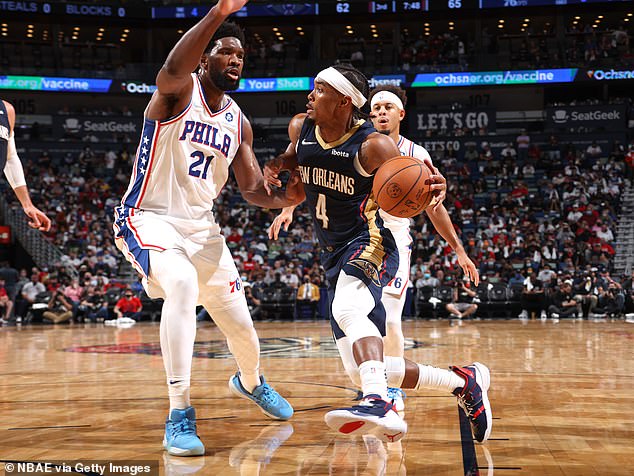 Embiid and Furkan Korkmaz both scored 22 as the Pelicans collapsed to kickstart what looks set to be another gruelling year.

The NBA has already seen some brilliant early match-ups and the Charlotte Hornets joist with the Indiana Pacers was fascinating as the squeezed a 123-122 win.

The Hornets put 24 points on the board without reply in the third quarter which proved decisive as they came from behind to beat the Indiana.

Meanwhile, Zach LaVine scored 34 to help the Chicago Bulls to a 94-88 win over the Detroit Pistons, the Washington Wizards swept past the Toronto Raptors 98-83 and Ja Morant scored 37 to help the Memphis Grizzlies to a 132-121 win over the Cleveland Cavaliers.

Karl-Anthony Towns had a double-double with 30 points and 10 rebounds for the Minnesota Timberwolves in a 124-106 win over the Houston Rockets, the San Antonio Spurs saw off the Orlando Magic 123-97 and the Utah Jazz beat the Oklahoma City Thunder 107-86.

Elsewhere, the Denver Nuggets edged out the Phoenix Suns 110-98 and the Sacramento Kings surprisingly beat the Portland Trail Blazers 124-121. 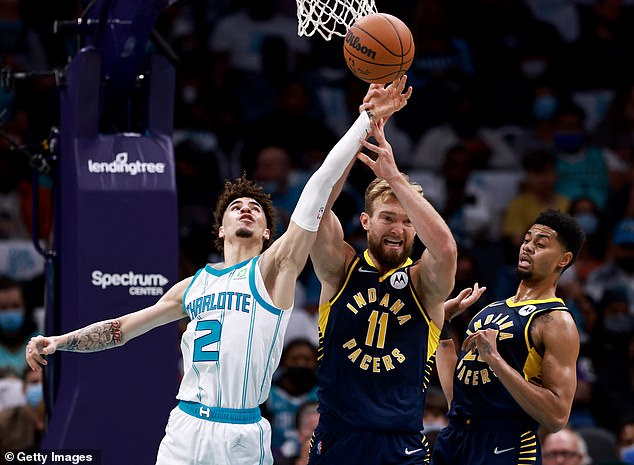