Rugby players are at greater risk of serious brain injury since the sport turned professional in 1995, concerning research shows, with stars likely to be hit ‘harder and more frequent’ than in amateur era

New research appears to confirm fears that the professionalisation of rugby has left modern players at greater risk of serious brain injury.

Several recently-retired stars – such as England World Cup winner Steve Thompson – have already been diagnosed with early onset dementia, while a study this year revealed that 23 per cent of current players had abnormalities in brain structure and half showed an unexpected change in brain volume.

Now more light has been shed on the possible costs of the sport turning professional in 1995, with research suggesting players were safer during the amateur era.

Rugby turning professional has coincided with bigger risk of brain injury, a study has found

The BRAIN study, involving 146 former elite players in England aged 50 and above, found no overall link between concussion, career length and cognitive function.

Researchers found that players who suffered at least three rugby-related concussions have, on average, no worse cognitive function than those who escaped such head trauma during their playing days.

‘Since the game became professional, players have got bigger, stronger and faster so when they’re sustaining head impacts, they are likely (to be) harder and more frequent than in the pre-professional era,’ said Lauren Pulling, CEO of The Drake Foundation, which funded the study.

‘What would these results look like if they were repeated in players from the modern game? Given the little pockets of evidence we have so far, we are concerned that they could perform worse.’ 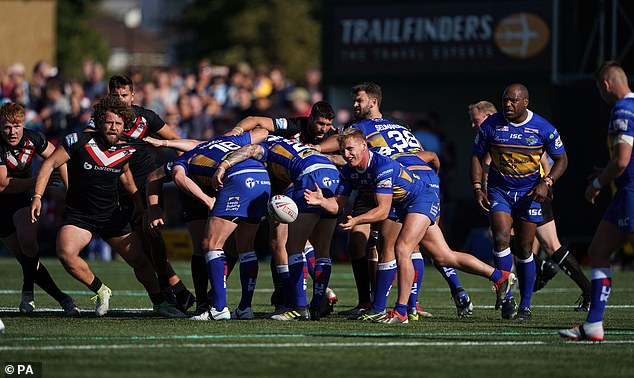 While research continues they ‘want rugby’s governing bodies to be taking preventative action. So we don’t end up seeing another generation of players suffering from the impact of head injuries before we work out exactly what’s happening’.

Concerns already exist around rugby’s congested calendar and now The Drake Foundation want new World Rugby guidance — limiting full-contact training to 15 minutes a week — to be ‘enforceable’, and ‘for head impacts to be universally minimised — not just in training but in games as well’.

The BRAIN study did include ‘concerning’ findings that 29 per cent of over 75s who had suffered three or more concussions did have significantly worse cognitive function and may be at greater risk of problems such as memory loss.