Cocktail sales are soaring as young drinkers enjoy a night out in the pub, according to pub chain Wetherspoons.

But beer sales have plunged as older punters – its core customers – stayed at home.

Company boss and founder Tim Martin said that some of its older clientele had been ‘understandably cautious’ about trips to their local while there are still Covid risks.

Changing tastes: Wetherspoons has seen sales of drinks such as cosmopolitans and mojitos rise 45% from two years ago while traditional ale sales declined by 30% and stout by 20%

This led traditional ale sales to decline by 30 per cent and stout by 20 per cent in the 15 weeks to November 7, Wetherspoons said in a trading update, compared with the same period of 2019 before Covid struck.

Across the whole company, sales were down 9 per cent.

But sales of drinks such as cosmopolitans and mojitos, in contrast, were up 45 per cent on two years ago while vodka sales were 17 per cent higher and rum 26 per cent to the good.

Anna Barnfather, an analyst at Liberum, said that the slump in older customers visiting means Wetherspoons ‘continues to lag’ behind the wider market, which in September saw sales rise by around 3 per cent compared with 2019.

Wetherspoons shares tumbled to the bottom of the FTSE 250 index last night – dropping 7.2 per cent, or 74.5p, to 954.5p – as investors fretted about how long it will take to bounce back.

Martin, an outspoken Brexiteer who founded Wetherspoons in 1979 in London’s Muswell Hill, admitted that the company’s performance ‘will depend, to some extent, on the outlook for the Covid-19 virus’.

He added: ‘Whereas we have an increased element of caution about near-term sales, booster vaccinations and better weather in the spring are likely to have a positive impact in the coming months.’

Wetherspoons was forced to close its pubs for 19 weeks during the pandemic lockdowns. 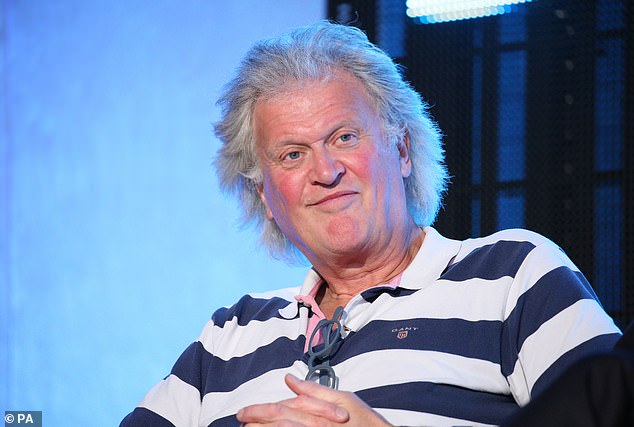 Beer slump: Wetherspoons boss and founder Tim Martin said that some of its older clientele had been ‘understandably cautious’ about trips to their local while there are still Covid risks

The ongoing effects of the pandemic were clear, with its central London, airport and train station branches all far less busy than before the outbreak.

The effects of the working from home trend, which keeps many people out of city centres, also meant that breakfast and coffee sales were considerably lower.

The no-frills pub chain often runs bumper offers on its cocktails menu, which has boasted tipples such as a vodka and cranberry concoction called the Woo Woo and a Jack Daniel’s whisky-based drink dubbed The Godfather.

Wetherspoons does not play music at its pubs. But it said that sales at its music-playing bar chain Lloyds No.1 were marginally higher in 2019 and probably reflected ‘a higher percentage of younger customers’ out partying.

Laura Hoy, equity analyst at Hargreaves Lansdown, said a ‘permanent’ shift in favour of younger pub-goers could be bad news for Wetherspoons.

Hoy said older customers’ worries about going out ‘should wane as the pandemic comes under control, but there’s no telling how long that will take’.

Wetherspoons operates more than 900 pubs and is known for converting some of its sites from former opera houses, cinemas and bank branches.

The company reported better news on supply chain and recruitment problems, saying it has ‘almost always been able to find alternatives, overall stock levels were in line with previous years’ and that things had got easier in recent weeks.

And recruitment hiccups, resulting in staff shortages in holiday destinations, have mostly eased. Its workforce is up from 37,000 staff when pubs reopened in April to more than 42,000.