A New Zealand cricketer has hit back after his post-match emotionless reaction to his team booking a T20 World Cup final berth made headlines.

Overjoyed Kiwis players and staff leapt from their seats on the boundary line moments after they defeated England by five wickets in a huge semi-final boilover in Abu Dhabi on Wednesday night.

As New Zealand players and coaching staff celebrated a famous victory, an emotionless Jimmy Neesham (pictured in the left corner) remained in his seat

Skipper Kane Williamson also remained seated but at least could manage a smile.

Neesham’s priceless reaction to the Blacks Caps getting revenge against England left many cricket fans baffled.

‘Jimmy Neesham didn’t celebrate… Even did not move,’ one commented

Another added: ‘You could’ve at least smiled like Kane.’

Others leapt to Neesham’s defence and commended him on his professionalism.

Another who saw the funny side photoshopped a smiling Neesham in the photo.

A later photo of Neesham still sitting there near his team’s dug-out on the boundary line on his own also quickly went viral. 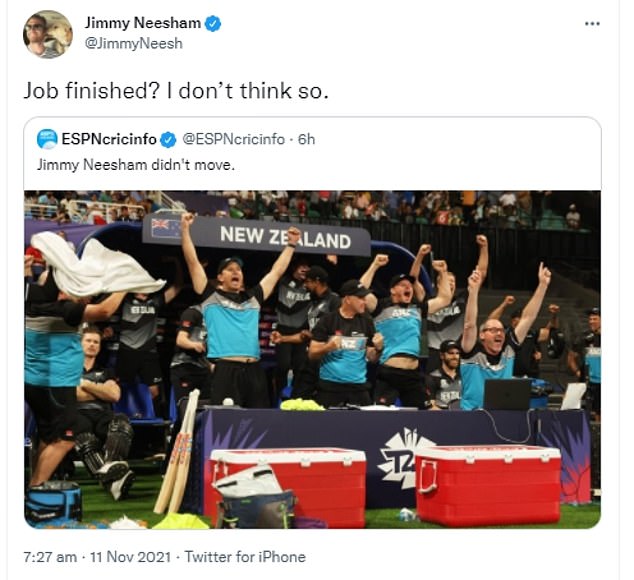 Neesham, 31, later responded to online backlash of the photo shared online by ESPN.

‘Job finished? I don’t think so,’ he captioned the retweeted photo.

Neesham was referring to New Zealand’s devastating loss in the limited overs World Cup final against England at Lord’s in 2019 on a controversial boundary countback.

‘Kids, don’t take up sport. Take up baking or something. Die at 60 really fat and happy,’ the shattered Kiwi famously tweeted at the time.

He also tweeted throwback footage of US basketball legend Kobe Bryant’s response in a post-match conference he’s asked why he’s not smiling about the LA Lakers being up 2-0 in the 2019 NBA finals. 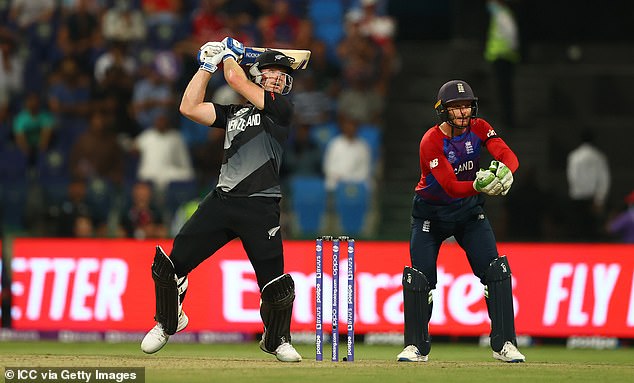 Neesham had a handy contribution in steering the Black Caps to victory on Wednesday night, taking 1-18 with the ball before smashing 27 runs off 11 balls with the bat, including three sixes.

Crickets greats hailed Neetham’s stint at the crease as a gamechanger.

New Zealand won the toss and elected to bowl before reaching England’s target of 167 with six balls to spare.

The Black Caps will play the winner of the second semi-final between Australia and Pakistan early Monday AEST. 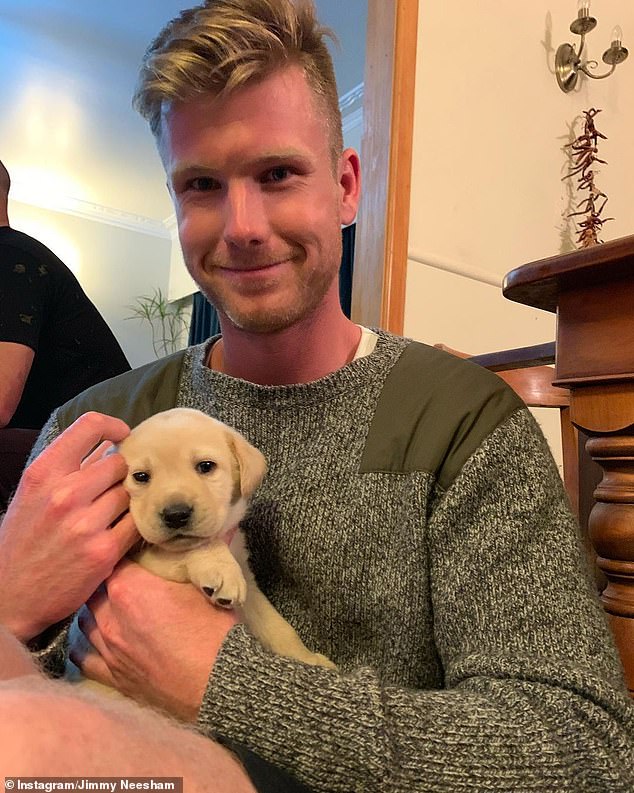