By Will Kelleher For The Mail On Sunday

Liam Williams joked the Principality Stadium pitch-invader cost him a pay-packet, after the man stopped him scoring a try against South Africa.

An hour into the game last weekend a 28-year-old, Callum Rowe, wandered onto the field for a £20 bet – and disrupted the game.

He was quickly chucked out, and slapped with a lifetime ban from the ground, but Williams was livid.

‘There was not much I could do about that. He ran on to the pitch. I did actually see him in my eyeline because I was looking in front of me. I was going to go on a short line off Johnny McNicholl but as I looked up, he was on the floor as part of three people rolling around on the floor.

‘I had to change my running line and did not make it to the try line. I’ve seen the aerial photo and South Africa have got a couple of guys coming across. You can never say yes (I would have scored) because it didn’t happen.

‘It’s not acceptable for fans to come on the pitch during a game at Principality Stadium to be honest. It’s happened a couple of times now and we don’t want to see it happen again.’ 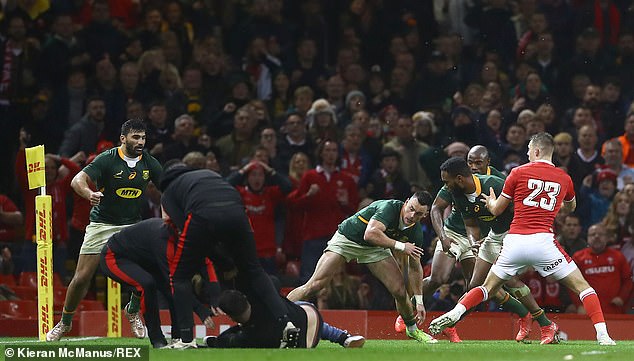 Williams starts for Wales at full-back on Sunday against Fiji – having had his appendix removed last month.

‘It was strange, it came out of the blue,’ he said of that ordeal.

‘I was pretty much in the house for two weeks going from my bed to the sofa and back again in agony.’

Now primed for Fiji he is excited.

‘I can’t wait to get back out there,’ he concluded. 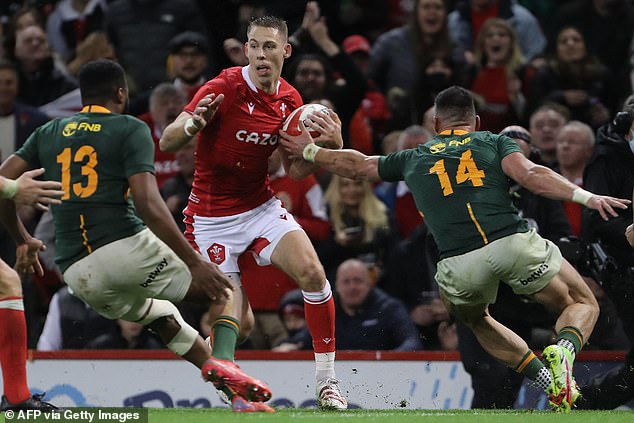 ‘They’re fantastic with ball in hand and they hit hard. No doubt I’m sure to be cut in half once or twice at the weekend.

‘People expect us to win by a large amount, but that’s not us. We just want to win – it doesn’t matter if it’s by one point or 101 points.’