Aaron Finch hailed his side’s ‘awesome’ T20 World Cup victory as Australia won the trophy that had escaped their grasp ever since its first edition in 2007.

‘There’s been so much talk about this being the one that’s been elusive to Australia,’ he said after a comfortable eight-wicket win over New Zealand in Dubai.

‘We’ve probably underperformed in the past, and have had some great teams along the way. But this team’s pretty special. It’s awesome.’ 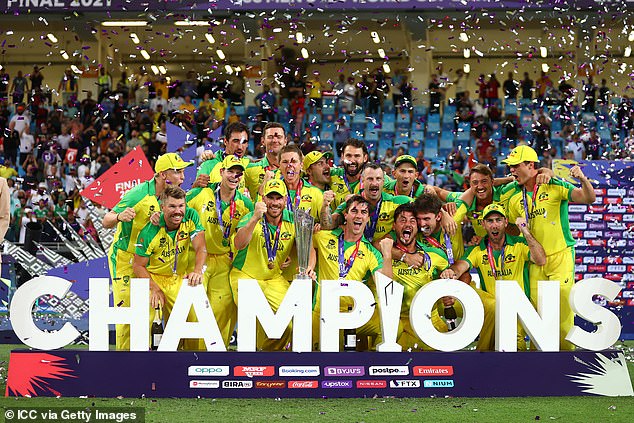 Finch cheerfully admitted he had enjoyed good fortune in winning six tosses out of seven, but insisted he never lost faith in his team’s chances, even after losing by eight wickets to England at the same venue a fortnight earlier.

‘I knew a few things would have had to gone our way, but we had such a belief in our group that we were as good as anyone in the world,’ he said. ‘You need a bit of luck in T20, but we played some really good cricket.

‘I tried to play the toss factor down throughout the tournament, because I thought we’d have to bat first at some point, but it did play a big part, to be honest. 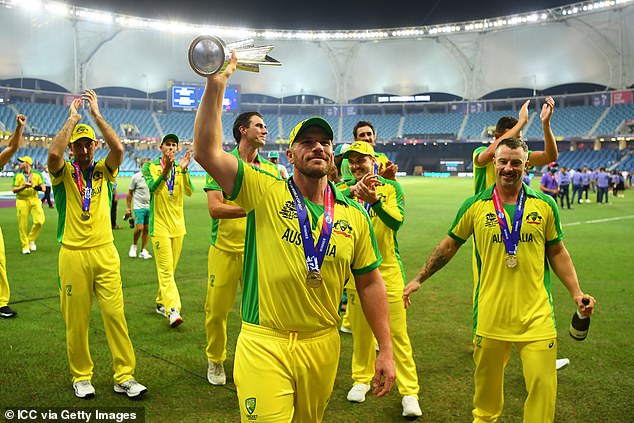 ‘You saw the dew out there: the slower balls were not holding in the wicket. I don’t know how I did it. Maybe it was just fate.’

New Zealand captain Kane Williamson, doing his best to make his voice heard while the Australian dressing-room belted out ‘Freed From Desire’ next door, agreed that losing the toss had played a part in another World Cup final defeat for his side.

‘It did have an effect,’ he said. ‘Some dew did come in. But take nothing away from the Australians. We would have tried to bowl first, but we didn’t get the toss and that’s the way it goes. Australia were outstanding.’