The injury to Williamson, who has played in all of Arsenal and England’s games this season, is a huge blow and the centre back could be facing months on the sidelines.

Eidevall was unhappy that his team had to play Tottenham on Saturday after playing HB Koge away from home in the Champions League on Wednesday evening. Chelsea, meanwhile, played Manchester City on Sunday after their game with Servette on Tuesday.

‘It’s a muscle injury so of course it’s an overloading issue. It’s a significant injury that could possibly leave her out this whole year and not being able to return before Christmas,” the Arsenal boss said.

‘We had a really tough week. No other team in the league has been asked to play in such a tough schedule like we did. It was almost inhuman. I would have been very happy to play like Chelsea have all season. We have been playing in the same competitions and they have been constantly playing with a better schedule and a better rhythm than we are doing. I’m not saying that’s deliberate. I am saying that’s the facts.

‘It would be nice to see if that can even out during the season so we’re constantly not getting the worst kick-off times or the worst turnarounds. We played late Sunday night, we had to travel away in Europe mid-week, then we played Saturday lunchtime. In less than six days we played three games.

‘Try to find any other English women’s team that plays with that schedule including the travel. I don’t think it’s fair. I think that was a mistake. If English teams are going to succeed in Europe you need to look at that and try to make it better and not only looking to please the television’s wishes on kick-off times.’ 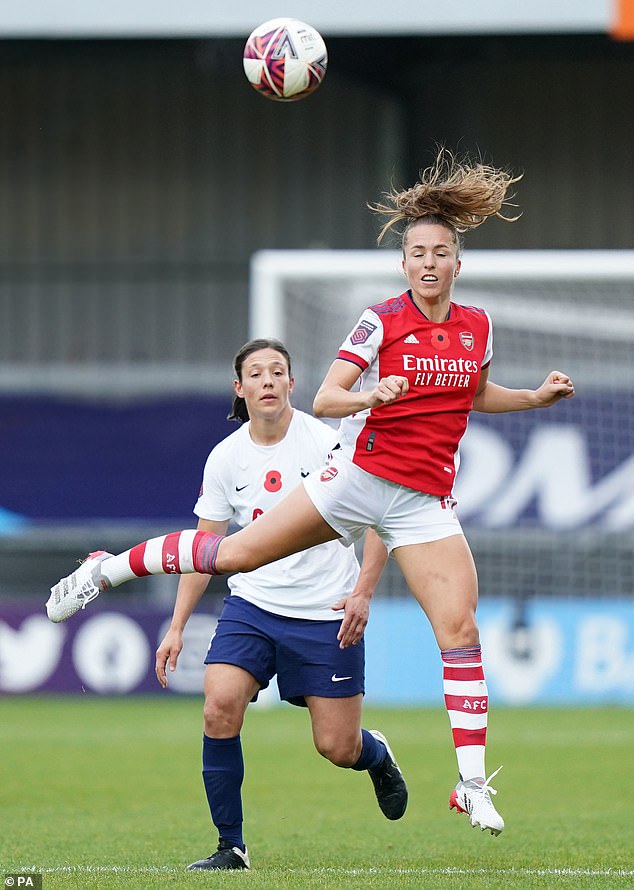 Eidevall has previously spoken about the importance of players receiving enough recovery time and worked with the Dutch FA to arrange for Vivianne Midema to be rested for their last international match before she was given more time off by Arsenal.

But Eidevall insisted there are several factors involved in the cause of Williamson’s injury.

‘You’re never going to hear me say ‘that is to blame for Leah’s injury’ because we don’t know that. We just know it is one of the factors that affect injury risk. What could we have done differently? It could be scheduling, it could be co-operation with the national team and it could be how we load the players internally at the club.’