Harvey Neville left Premier League promise at Manchester United for USL football in America, but is it a risk that could lead the right-back to follow in the footsteps of his dad and uncle?

Phil Neville, manager of David Beckham’s MLS franchise Inter Miami, axed 10 players from his squad this week – but promoted his son Harvey to the first-team.

Beckham’s side’s failure to qualify for the MLS play-offs was confirmed last week, forcing Neville to make brutal cuts to his underperforming squad.

The 19-year-old had been playing for USL League One club Fort Lauderdale, which is Inter Miami’s feeder team, but has now been promoted ahead of the 2022 season.

Harvey is just the latest to play professional sport in the extraordinary Neville family. Phil and his brother Gary enjoyed great careers with Manchester United and England, with Phil also playing for Everton. Their sister Tracey is a former England netball international and former England head coach.

Like his father and uncle, Harvey plays at full-back but he can also operate in midfield.

The teenager has demonstrated versatility with his ability to defend but also to fire a few crosses into the box to create the chances for his team-mates.

He played 21 games in the USL for Fort Lauderdale last season, providing one assist.

The name Neville is synonymous with Manchester United thanks to Phil and Gary but Harvey was actually on bitter rivals Manchester City’s books for a spell. 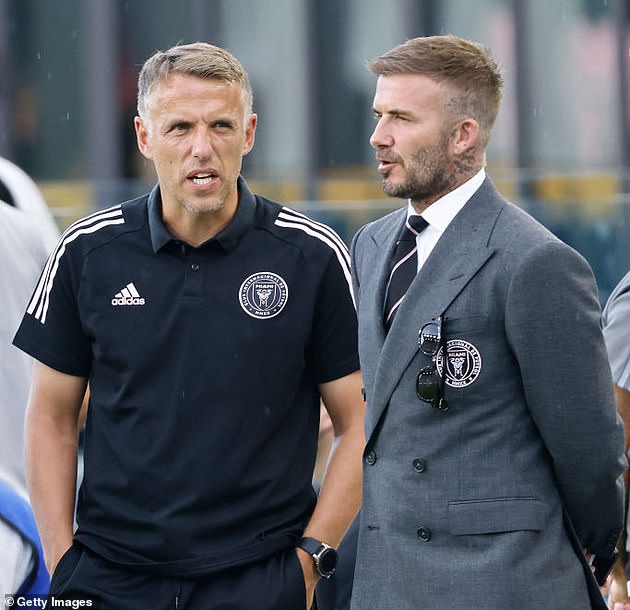 The played on the other side of Manchester for City’s youth setup, where he won an Under 13s Premier League medal, between 2013 and 2015 after making the switch from United.

Harvey then followed his father to Spain when Phil to the job as assistant coach in Valencia, soon joined by brother Gary as head coach in 2015.

Although Phil left Valencia when Gary got the axe, bringing a rather anti-climactic end to an extraordinary managerial experiment, his son stayed put as a promising member of the academy and was rewarded with a new contract at the club.

Harvey was promoted from the youth setup to Valencia’s Under 18s side in December 2017.

But just eight months later, the right-back made his return to the family firm, Manchester United.

He was a regular for Neil Wood’s Under 23s side last season, scoring once and providing two assists in 10 appearances, predominantly playing at right-back. 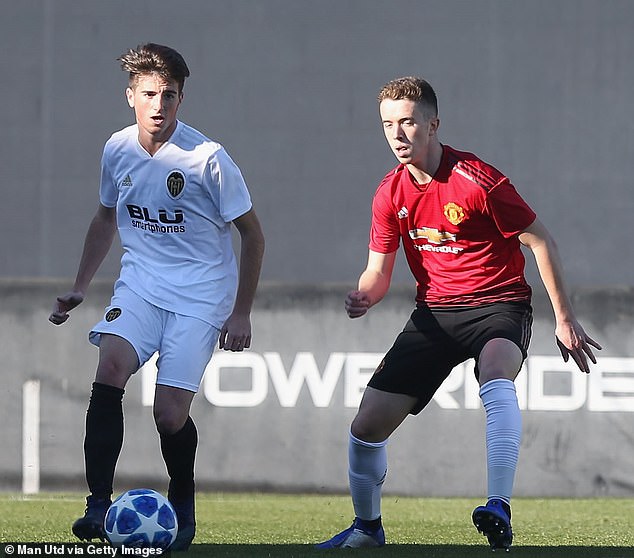 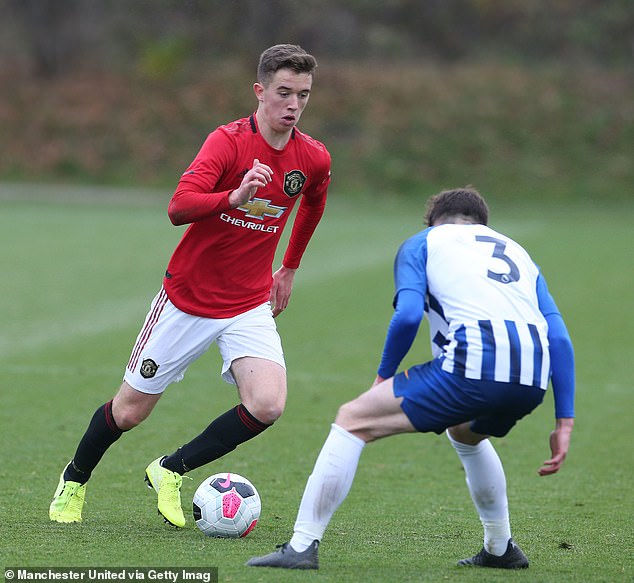 He signed his first professional contract with his dad’s former club in summer 2020 but made the switch across the Atlantic to Inter Miami’s USL side Fort Lauderdale in May.

The youngster confirmed his United exit by posting a photo of him in the club’s gear on Instagram and updating his social media profiles.

The caption read: ‘Let’s go @intermiamicf’ and was liked by Beckham and several of United’s academy players. 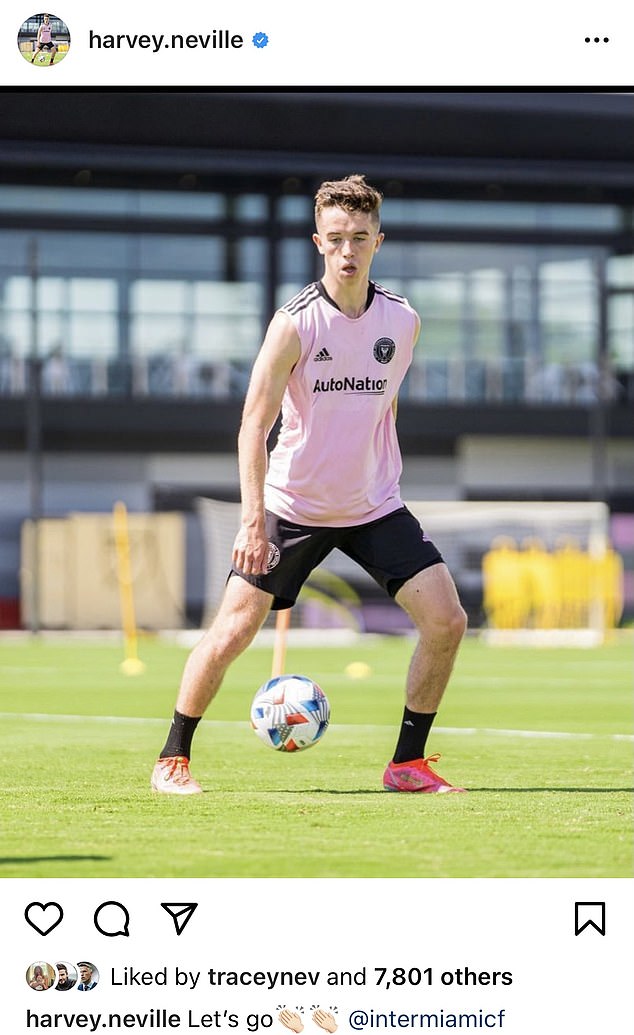 The news of Harvey’s involvement with the first team comes after he was seen travelling with the squad to their final game of the season against New England on November 7.

He was joined by his Fort Lauderdale team-mates Noah Allen and George Acosta for the trip to Massachusetts.

Harvey’s move to the MLS will see him leave behind Beckham’s son, Romeo, who is also 19. Romeo will continue to ply his trade at Fort Lauderdale before looking to break into the Miami first team in the future. 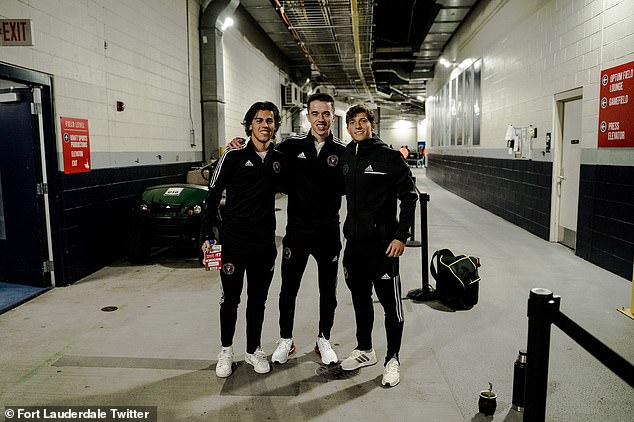 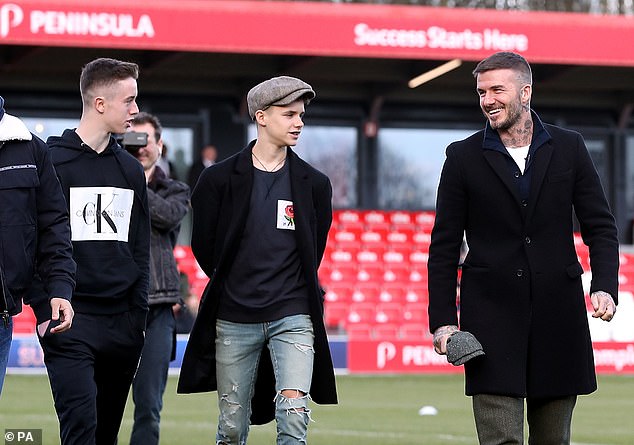 Harvey’s (left) move to the MLS will see him leave behind Beckham’s (right) son, Romeo (middle), who is also 19. Romeo will continue to ply his trade at Fort Lauderdale

Harvey left the United academy in search of regular playing time and the hope that he could make the step up to the first-team – mission accomplished.

Despite, Gary and Phil played for England with a combined 144 caps for the Three Lions, Harvey has played for the Republic of Ireland, who qualifies for through his mother Julie’s family.

Speaking about his son’s achievements this season, Neville said: ‘He’s done well and although he has a lot of development to do, he is part of a group of eight to 10 players who we want to get involved with the MLS team. 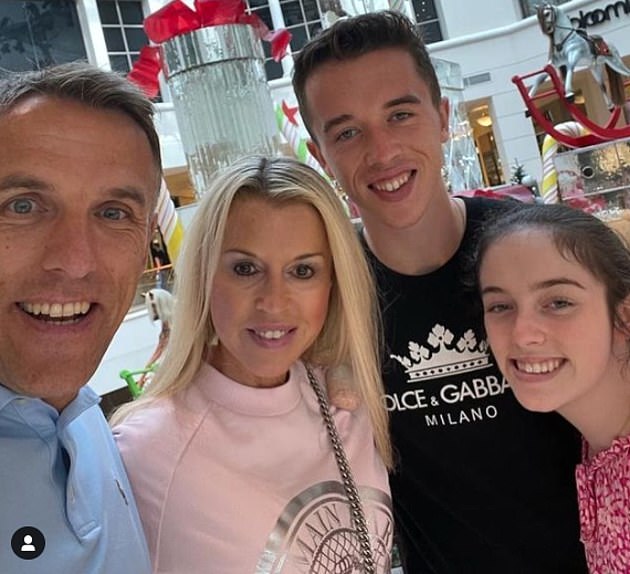 Harvey qualifies to play for Ireland through his mum Julie (second left, alongside Phil and daughter Isabella), who claimed the youngster ‘lives to play football’

‘He is only young. There are ups and downs and many challenges ahead but he just has to keep up his attitude.

‘We are a club which needs to produce its own players and we want to get this group on the pitch as soon as we can.’

Ever the proud dad, Phil has been keen to praise his son and show off his abilities. While Harvey continued his spell at Valencia, the former United and Everton man took to Instagram to post a video of his son in action.

Beckham responded to the post, with the former England captain commenting on the likeness between himself and Harvey, via The Sun.

Beckham responded to Neville’s post, asking if Harvey had been watching videos of him

‘Great cross Philip, you been showing Harvey videos of me??’, Beckham wrote.

In 2020, while playing for United’s Under-18 team, his mother Julie said: ‘He lives to play football and it’s nice for him to share his dad’s passion.’

Harvey’s American move has clearly paid off in terms of in terms of first-team football but is making it in the MLS the same as the Premier League?

Perhaps not but with a talented background, a brilliant opportunity to succeed handed to him and even Beckham noticing the resemblance in quality, Harvey can surely take his career upwards in leaps and bounds.