Uilisi Halaholo has had to battle to be here – against the odds of his upbringing, the trials of lockdown and tests of Covid.

The latter – proved positive at the start of the autumn – made him miss a dream fixture against the All Blacks, the team he strove to be part of as a child, but now he is ready for their foes Australia.

Halaholo is the west Auckland boy of Tongan parents who came from ‘nothing’, escaped a culture of gangs and drink to find rugby, found an accepting new home in Wales and a nation that has adopted him openly.

On a chilly morning overlooking the Cardiff Arms Park pitch – Halaholo’s home for five years now – he opens up on turning his life around.

His parents, father Tu’aofa, the sixth child of 12, and mother Malia, were born in Tonga’s capital Nuku’alofa then immigrated to New Zealand in search of a better life.

Uilisi is number two of his siblings – with older sister Setina, and younger brothers Noa, Lona and Sam.

‘We had nothing, man,’ Halaholo explains, pausing before he continues.

‘This is not me trying to make my parents look bad, but we went to school with no lunch, then would come home, have a couple of pieces of toast and then wait for dinner. My dad would work 6am to 6pm in the factory – and then we’d eat.

‘People might see it as children not being taken care of but it was normal and we were grateful for it.’ 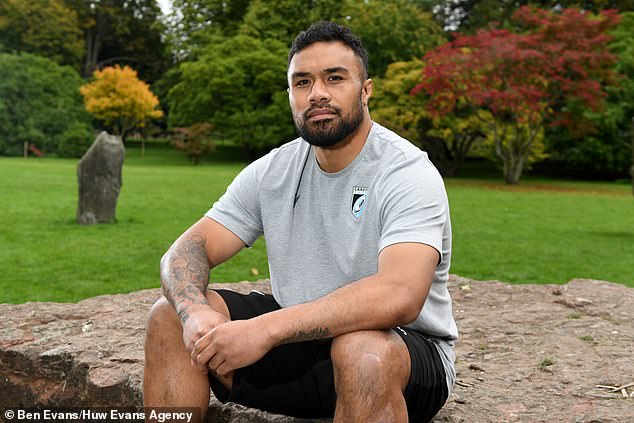 Malia would come home later than Tu’aofa, combining work at the ‘3 Guys’ supermarket with study; now she is a tenant manager for Housing New Zealand.

She was strict with her kids. School, church, rugby – go to those and come back to your family.

Her husband has worked 12 hour days for more than 30 years now, and is still four from retirement.

‘You know those long, thin lightbulbs?’ Halaholo goes on.

‘Dad used to make the metal part around them. He’s got five brothers, and they all worked there – it was like a little family factory. When I go and talk to the newbies they say he’s the man. He could use the machine with his eyes closed!

‘I’m grateful for that fella, man. He had to do what he had to do, that’s why I had to give rugby a good go.’

In his late teens Halaholo fell on the wrong side of the tracks. He wasted his talent joining a gang, watched New Zealand win the 2011 World Cup drunk and on drugs, was dropped from the Auckland academy by a coach named Wayne Pivac, and had a child whom he initially neglected.

Atu is now 13, having latterly grown up in Wales with sisters Sitina, seven, Miriam, four and Masina two, as Halaholo and wife Sandra moved there in 2016.

They love their Cardiff life, living by Roath Park Lake, meeting welcoming friends and attending church. The girls confuse their father by speaking Welsh too.

‘Sitina comes and asks me questions in Welsh and I have no idea what she’s talking about!’ he laughs. 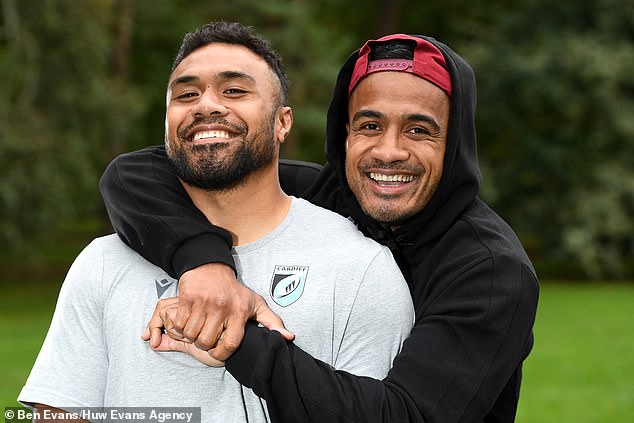 ‘We always do little quizzes… “tell me six colours” and she’d tell me six in Welsh. It’s really cool.’

The girls’ names are tattooed on Halaholo’s body. They are his world.

Halaholo has a new inking – he lifts up his shirt to show his four daughters’ faces sketched onto the left side of his chest.

‘Family, bro,’ he says proudly, pointing to the new work.

It was completed this summer, on his first visit to Auckland since 2018. There he finally spent time with the 19-strong Halaholo clan in their three-bedroom house – laughing, playing and catching up after so long apart.

Unable to go back for three years, he struggled so far from his folks in lockdown. It was ‘chaos’ in Wales, alone with Sandra and three children under five during the early pandemic months.

He entered Covid isolation in 2020 just after major knee surgery having ruptured his anterior cruciate ligament – the scar is still visible on his right leg.

‘It was tough man,’ Halaholo says with a big exhale of breath, looking back.

‘2020 was one of the hardest years of my career. Going through that on my own, having no family around, the kids home every day, my wife was struggling coping with it too. 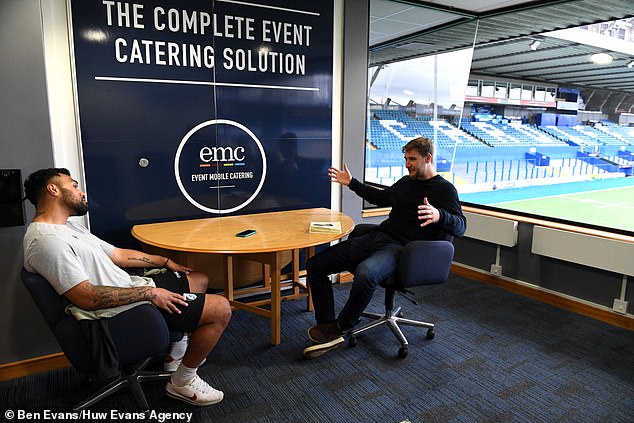 ‘She didn’t just have to look after them but me with as well.’

‘I just knew in myself and my body, mentally… you don’t realise you’re are slowly drifting away,’ he explains.

With physical contact with physios banned, Halaholo had no idea how to tackle his rehabilitation, had a thigh muscle slowly withering away and later pulled his calf learning to run again.

He decided to forget about rugby and concentrate on family, not noticing he had put on one-and-a-half stone in weight.

‘You come back into pre-season and think “how am I going to come back from this?”’

It was Cardiff team-mate Rey Lee-lo, the Samoan, whom Halaholo credits with his recovery.

They go way back to holding tackle bags at the Hurricanes in Wellington far behind World Cup-winning All Blacks Ma’a Nonu and Conrad Smith in the midfield pecking order.

It was Lee-lo who convinced Halaholo to go to Wales, and got him running again.

‘He was pushing me. He didn’t need to, but would take me down to the 4G pitch at the Vale, to run, try and drop the weight and get the knee right,’ says Halaholo now with Lee-lo by his side at Bute Park’s Gorsedd Stone Circle while we take his photograph. Soon the pair are messing about together like brothers.

‘I always thank Ray for getting me through, and tell him I wouldn’t have been able to make my Wales debut if he hadn’t pushed me.’

That honour came against Scotland in this year’s Six Nations – Halaholo, a residency qualifier, selected this time by Pivac, now Welsh boss.

He honoured Lee-lo by giving him his shirt from the Italy game in a tournament Wales won.

During that competition Halaholo asked to alter his name on team-sheets. No longer Anglicised ‘Willis’ he was Uilisi, the ancestral name given to him by his aunt as per Tongan tradition. Sadly she passed away at the end of last month.

‘I have an uncle in America who watches me, I’m named after him, so wanted to make sure I showed respect and he saw his name up there,’ he explains.

It will be 5am on Sunday morning when the Halaholos in Auckland turn on their televisions to see their Welsh son play Australia.

His brothers might come in from a night out, the rest dragging their mattress into the front-room to tune in, bleary-eyed.

‘They’ll be proud bro,’ he concludes.

Who would not be? Of Halaholo, the boy from nothing but now a humble Welsh hero.