Bayern Munich were made to pay from a slow start back after the international break after they were beaten 2-1 away from home by lowly Augsburg.

The German champions were stunned by the side who started the match in 16th place with just nine goals in 11 games, falling 2-0 behind thanks to Mads Pedersen and Andre Hahn’s first-half strikes.

Robert Lewandowski pulled one back before half-time but Bayern were unable to break through their stubborn opponents again, meaning Borussia Dortmund can cut the champions’ lead at the top to just one point with a victory this weekend. 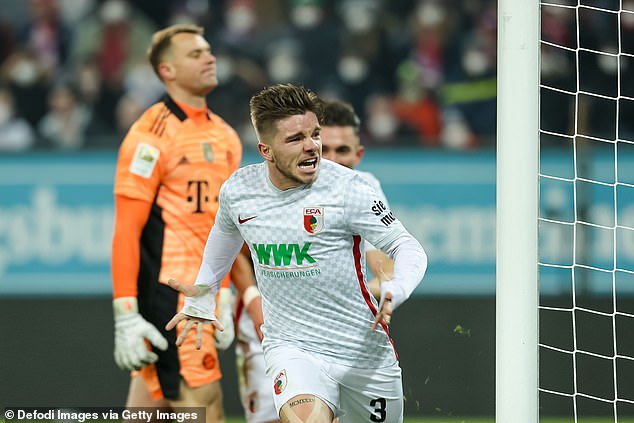 Julian Nagelsmann’s Bayern naturally dominated the opening exchanges but tested the Augsburg goal very rarely in the opening 20 minutes – with their best chance coming from home goalkeeper Rafal Gikiewicz miscontrolling a backpass which went into the side netting.

A bright spark for the German champions early on was former Reading full-back Omar Richards, who claimed another Bundesliga start on Friday and was threatening going forwards while being solid at the back.

But it was the home side, who had only scored nine goals in 11 league matches before the game, who took a surprise lead when Pedersen slammed home from inside the box after Andi Zeqiri’s cross from the left had been cleared away. 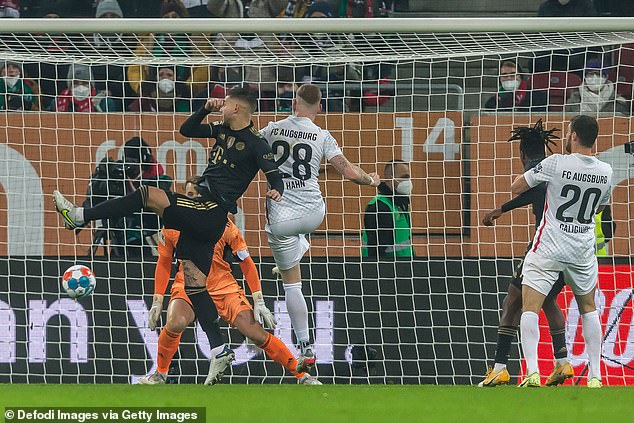 Nagelsmann’s Bayern tried to use their attacking talent to get themselves back on level terms with Richards and Serge Gnabry going close with blocked shots – but the German champions looked out of sorts so soon after the international break.

And their task got even harder when Iago’s cross was headed goalwards by Andre Hahn and Manuel Neuer could not palm the effort round the post as it nestled in the bottom corner instead.

Augsburg’s excitement was understandable but just minutes after doubling their lead, some lapses in frenzied concentration from the home side allowed Robert Lewandowski too much space in the penalty box. 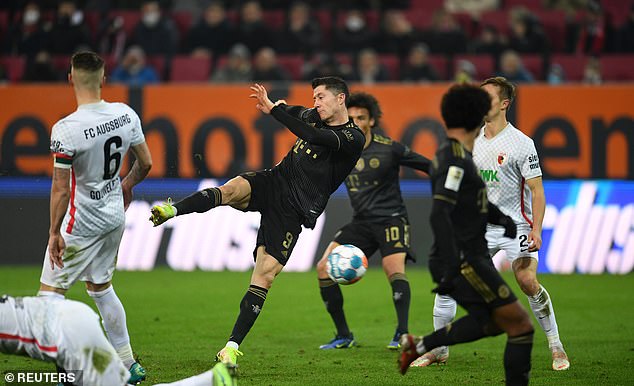 Leon Goretzka found the Pole with a cross from the right and the clinical Bayern strike swivelled to net his 24th goal of the season – after just 18 games.

Lewandowski nearly levelled the scoreline with a second just five minutes after the break when a misjudged Augsburg clearance fell into the path of him inside the box, but the Bayern star could only blast over.

After being overwhelmed down Augsburg’s left for most of the game, Bayern tried to revamp that area of the pitch themselves in the second period with Alphonso Davies and Jamal Musiala coming on. 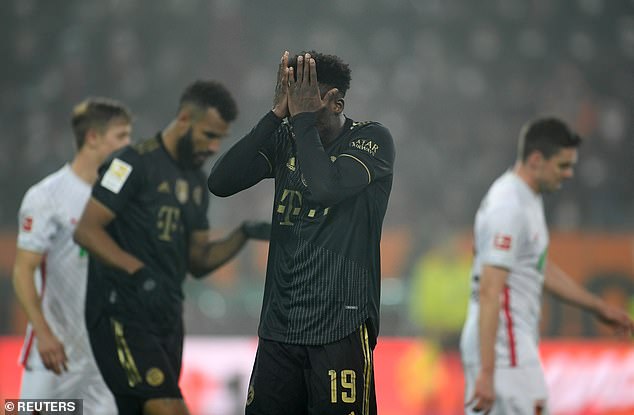 Canadian full-back Davies, back late from international duty so only risked from the bench, was a constant threat and nearly levelled with a rasping off target effort with 15 minutes left – but Augsburg kept the speedy wide man quiet all evening.

Inside the last ten minutes, Lewandowski thought he found an equaliser when he found more space in the box but could only fire at Gikiewicz – while Musiala had a similar effort palmed away by the Augsburg goalkeeper.

A desperate long-range effort from Bayern substitute Tanguy Nianzou summed up the champions’ display on Friday night – out of ideas and out of sorts.