A goal from substitute James Forrest allowed Celtic to pay a fitting Hampden tribute to Bertie Auld as St Johnstone’s run of cup glory came to an end.

Forrest fired home the only goal from close range in the 73rd minute as Celtic edged past a stubborn Saints side 1-0 in the Premier Sports Cup semi-finals.

Auld once quipped that Celtic considered Hampden their training ground as they were there so often. Forrest, who is no stranger to a goal at the national stadium, set up the chance to win his 20th major trophy when his side face the winners of Sunday’s semi-final between Rangers and Hibernian on December 19.

There was a minute’s applause for Auld before the game and Celtic fans also paid tribute to the European Cup winner with a mass display and a banner which read: “They’ll encourage you and they’ll never forget you.” They were the prophetic words of Auld’s father on the day his son first signed for Celtic 66 years ago.

There were further accolades in the 67th minute when a giant portrait of the midfielder was accompanied by a pyrotechnic and mass flashlight display. The players paid their own tribute by wearing Auld’s favoured number 10 on their shorts. 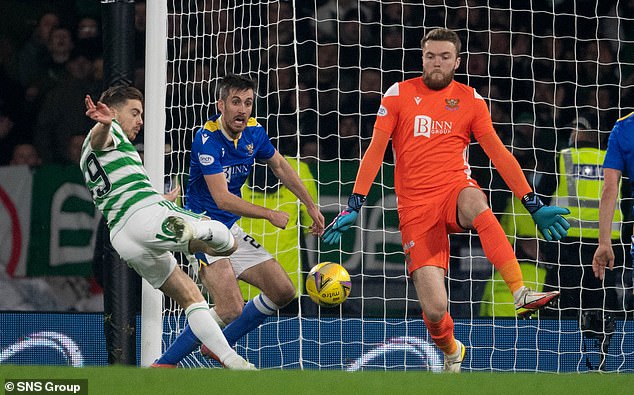 Celtic made a bright start as they got the ball out to the left for Jota to cause problems three times in the opening six or seven minutes. David Turnbull fired well over from the winger’s cutback and saw a header blocked from a rabona cross.

Saints soon got to grips with the problem and Celtic goalkeeper Joe Hart survived a major scare when he was charged down by Michael O’Halloran as he looked for a pass in his six-yard box. The ball flashed a yard outside the post.

With Craig Bryson in particular harassing the Celtic players in possession, space was at a premium in the Saints half.

Jota went down in the box after a slight push by Shaun Rooney but referee Nick Walsh decided there was not enough in it. 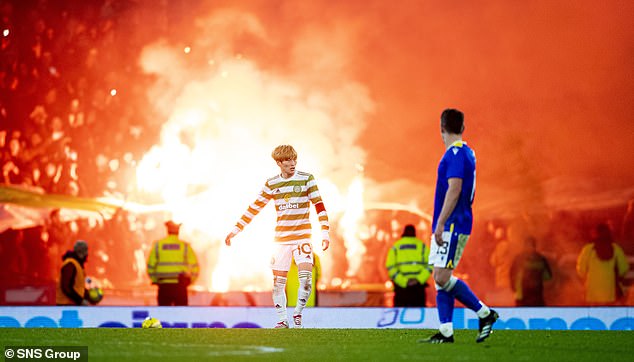 Kyogo Furuhashi was coming short to get involved and his initiative led to a chance for Liel Abada but Bryson made a tremendous sliding block.

The holders twice threatened from long range late in the half. Hart gathered Bryson’s bouncing effort at the second attempt before scrambling as Chris Kane’s effort flashed wide.

The Perth side suffered a blow early in the second half when David Wotherspoon immediately signalled for help when he went down after appearing to jar his knee. Although a stretcher was called, the midfielder was able to walk off as Ali Crawford came on.

Celtic were pushing Saints back but were still struggling to break their opponents down and their fans raised the volume, sensing their team would need all the help going to get past Callum Davidson’s well-organised men. 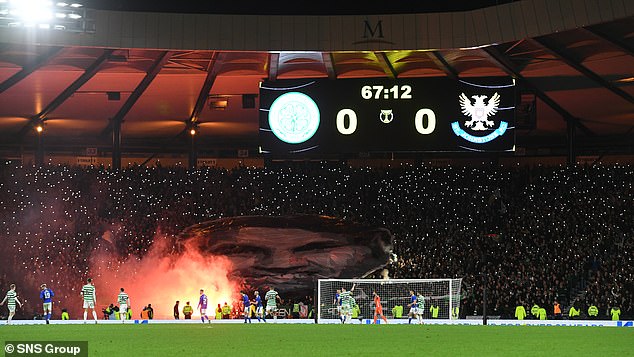 Further assistance came when Forrest replaced Abada and he was on hand to fire home from six yards after Jota got round the outside of James Brown and delivered a cross which ricocheted off two Saints players.

There was a flashpoint moments later when Rooney, frustrated by the double whammy of being caught by the arm of Cameron Carter-Vickers just before the goal, caught Stephen Welsh with a flying elbow at a high ball. Walsh brandished a yellow card, one of 10 during the game, and the Celtic defender went off with a facial injury.

Jota and Mikey Johnston almost doubled the lead in the closing stages but were denied by Liam Gordon’s challenge and a Zander Clark save respectively.