‘They’re entitled to their opinion… but I disagree with them completely’: Brighton boss Graham Potter left baffled by loud boos from the Amex crowd after 0-0 draw with Leeds – as he reminds them his side sit EIGHTH in the Premier League

Brighton boss Graham Potter was left perplexed by fans booing after his side battled out a goalless stalemate against Leeds at the Amex on Saturday.

The Seagulls extended their winless run in the Premier League to eight games but Potter was quick to remind fans that his side still sit eighth in the table.

Brighton were dominant in the game and should have snatched all three points but the draw saw them leapfrog Manchester United.

But the Amex crowd were not impressed with the result as booing could be heard from the stands after the full-time whistle.

Potter was confused at the booing and could be seen looking into the crowd and shaking his head in disbelief.

Following the game, the Brighton boss told Sky Sports: ‘It’s frustrating but that happens in football.

‘We created chances today and if we maintain that level of performance we’ll score goals. 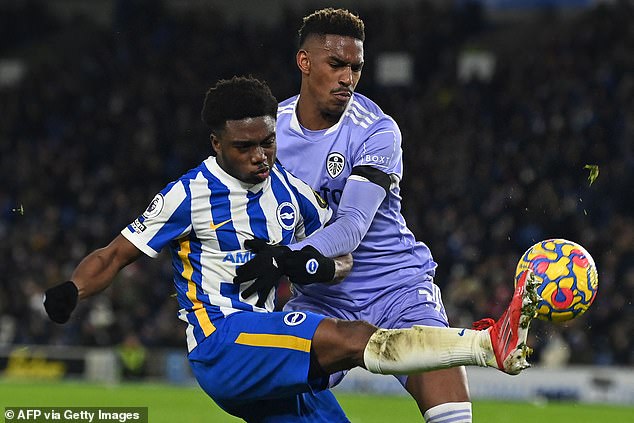 Brighton dominated the first half, with Tariq Lamptey (left) a superb outlet down the right

‘The fans are entitled to their opinions but I disagree with them. You have to understand the game, who we played and what we did.

‘We are sitting eighth in the Premier League but maybe I need a history lesson on this club.’

Potter’s high-flying Seagulls got off to a firing start to the season as their first five games produced four wins but Brighton have suffered a poor run as their last eight games have left them without a win.

The stalemate was the sixth draw during Albion’s run without victory but was sufficient to move them up a place to eighth, just one point behind Tottenham.