Kylian Mbappe has left the Spanish media in uproar with his shock decision to shun Real Madrid and sign a new three-year deal with French side Paris Saint-Germain.

The 23-year-old has been the topic of debate in recent weeks as to where he’ll be playing his football next season – with his current deal in France coming to an end in the summer.

Despite Real Madrid matching the terms offered by his current club, Mbappe announced his decision to commit his future to PSG prior to their game against Metz on Saturday night. 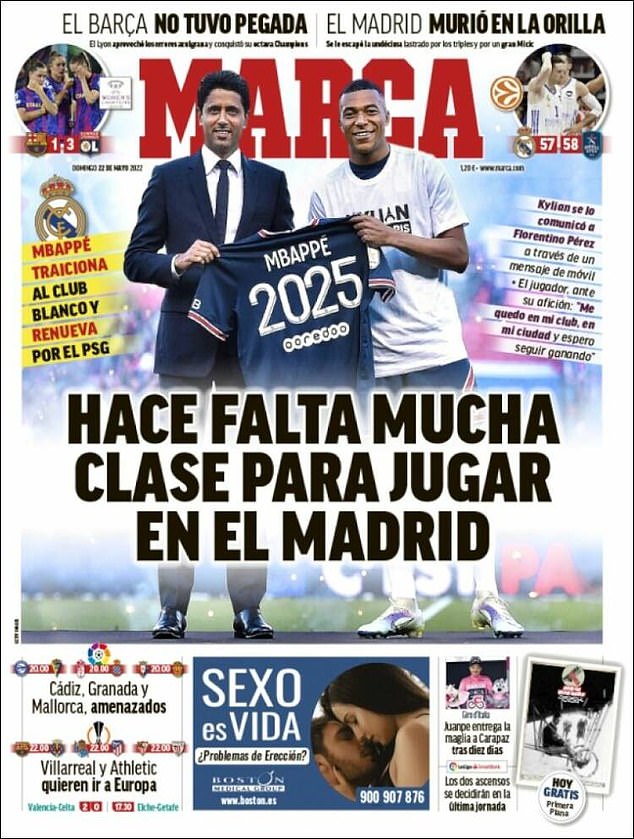 Following the Frenchman’s decision, LaLiga have written an extraordinary statement detailing their intentions to report PSG’s actions to UEFA and the French authorities.

The Spanish league claim that they will file a complaint as they believe the terms of Mbappe’s new contract at PSG ‘threatens the economic sustainability of European football.’

And the press in Spain appear to share the league’s anger as they hit out at the ‘traitor’.

Marca led the fury as it appeared to take aim at Mbappe’s character and class following the forward’s U-turn decision. 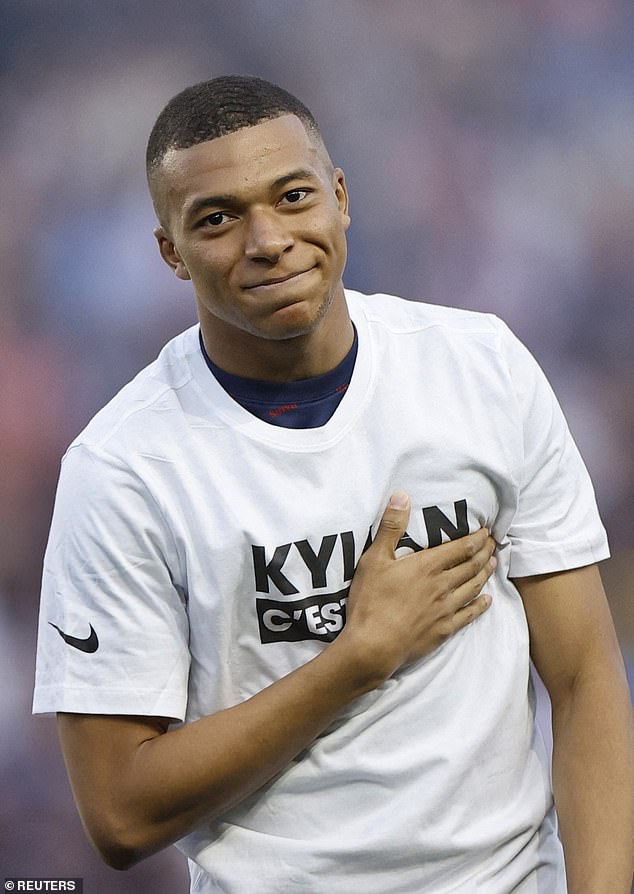 The publication led with the headline: ‘It takes a lot of class to play in Madrid.’

After suggesting Mbappe does not possess the class to play for Los Blancos – despite his clear talent – Marca continued to say that he had ‘betrayed’ the club by renewing his contract at the Parc des Princes.

Meanwhile, AS couldn’t resist a sly dig at the World Cup winner as their front page read: ‘He’s missing out.’

The Spanish publication continued to suggest that it was his loss as it wrote: ‘Mbappe prefers PSG’s money to Madrid’s legend.’ 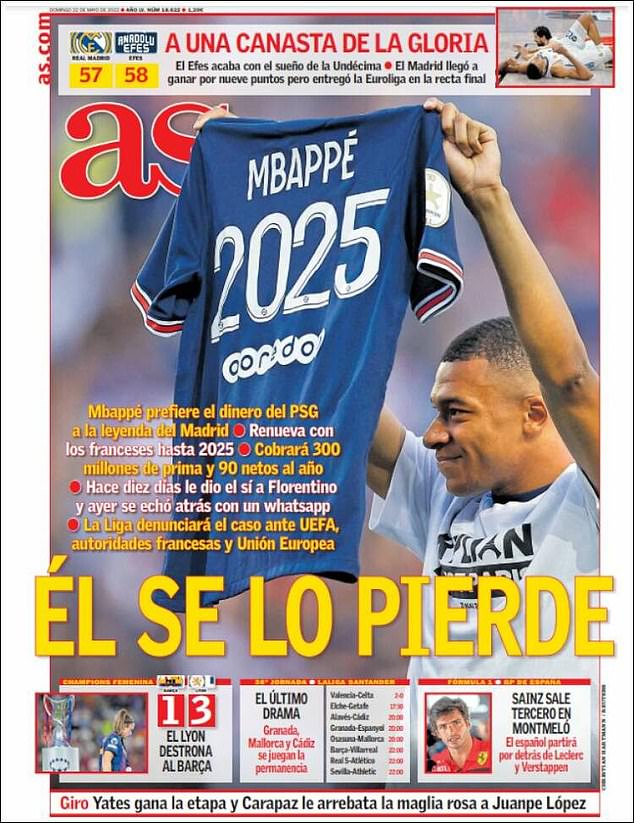 Its front page focused on Barcelona Women’s 3-1 defeat to Olympique Lyonnais in the Champions League final on Saturday night, which saw them lose their European crown.

However, it did find room for Mbappe and lacking the slightly bitter edge of the country’s other newspapers said: ‘Mbappe brushes off Madrid and renews for PSG!’

The publication continued to say that the Frenchman has ‘stood up’ Real Madrid president Florentino Perez.

However, even they couldn’t ignore the news, leading with a simple ‘He stays’ splash. 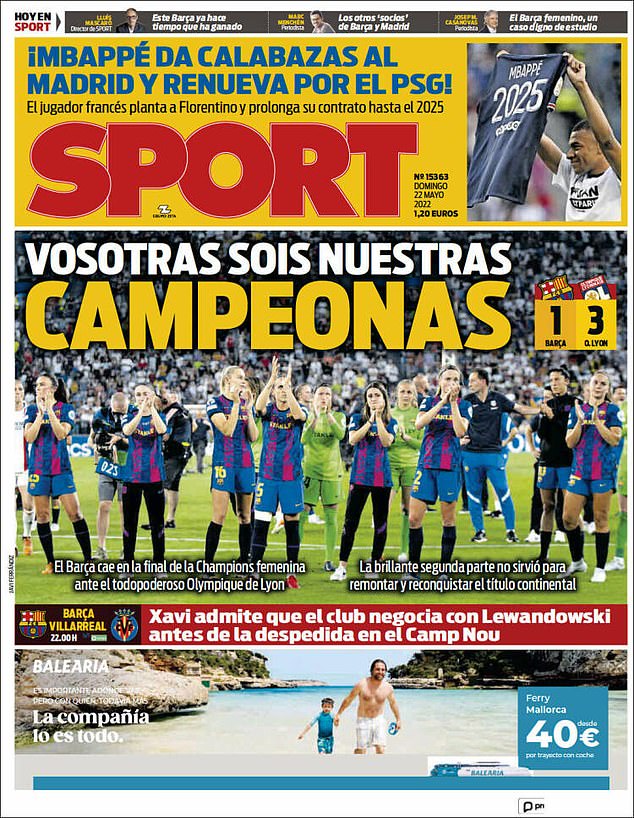 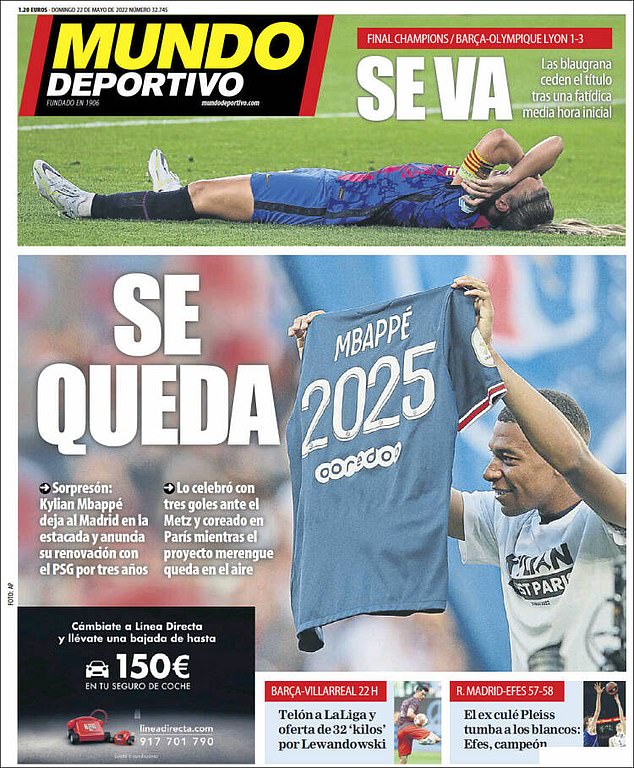 Mundo Deportivo, published in Barcelona, could not ignore the decision with a simple splash

Los Blancos had made their interest in Mbappe clear last summer when they submitted a final bid of £154million for the Ligue 1 top scorer, in an attempt to pry him away from Paris.

Though the club rejected the proposal, it was widely anticipated that the French star would join Carlo Ancelotti’s side a year later after he refused to renew his deal at PSG.

However, Mbappe made a shock turnaround in his contract saga and announced his decision to sign a new three-year deal at the club.

‘I would like to announce that I have chosen to extend my contract at Paris Saint-Germain, and of course I am delighted,’ Mbappe said. ‘I am convinced that here I can continue to grow at a club that provides everything necessary to perform at the highest level. 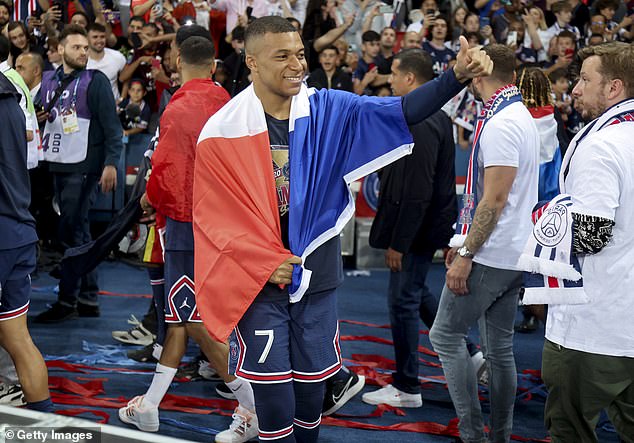 ‘I am also delighted to continue to play in France, the country where I was born, where I have grown up and where I have made my name.

‘I would like to thank the President, Nasser Al-Khelaifi, for his trust, his understanding and his patience.

‘I would also like to thank all the fans of Paris Saint-Germain, both in France and around the world, for their support, especially in recent months. Together, side by side and ambitious, we will make magic in Paris.’

The France superstar followed up his announcement by scoring hat-trick against Metz at the Parc de Princes – bringing his tally to 28 goals in the league campaign. 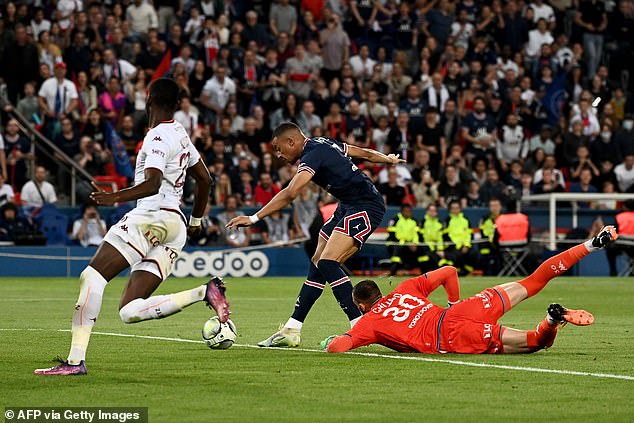 Despite the Spanish media’s reaction, the news may not come as a surprise to some, with Madrid boss Florentino Perez already informing his squad on Friday that Mbappe would not be joining the side, Spanish football expert Guillem Balague claimed to have been told by a source.

Balague appeared to suggest that Madrid and PSG were both willing to pay Mbappe a signing on fee of €150m – around £126.7m – alongside wages and bonuses.

Mbappe’s mother, Fayza Lamari, said on Friday that the 23-year-old had concluded discussions with both clubs over ‘almost identical’ offers.